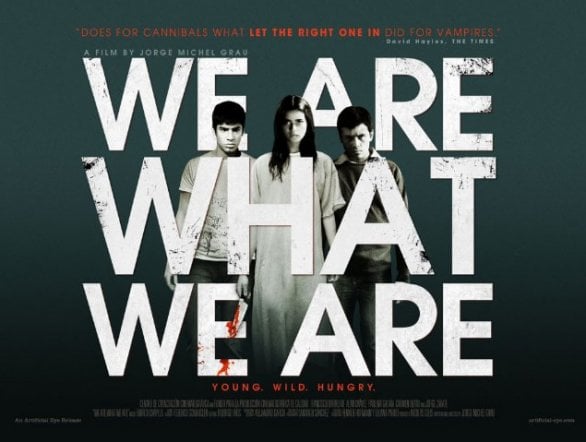 We Are What We

In the same way Let The Right One In reinvented the vampire brand and [Rec] put a clever twist on the epedemic /zombie film, We Are What We Are reinvigorates the cannibal genre with an emotional portrait of a family bound by a terrible secret and driven by monstrous appetites. Unlike most cannibal films, We Are What We Are eschews the easy options of excessive gore, graphic violence, sex and and cheap laughs to create a deeply moving drama with a spoonful of black comedy and a healthy serving of horror. It’s a slow burning film with an engulfing atmosphere that occasionally leaves you feeling uneasy and other times laughing along. For every moment of bloodshed (of which there is surprisingly little), there are subtleties and surprises that transcend this exhausted genre. Though the violence is nowhere near as brutal as the cannibal movies of the late ’70s or early ’80s, We Are What We Are hasn’t forgotten its roots, administering just enough bloodshed to upset mainstream movie-goers. It also provides us with nice, small moments of color for the characters, short but clever lines of dialogue and plenty of room for development. Director Jorge Michel Grau (who also wrote the script) conjures up one of the best, most imaginative and resonant family-themed horror stories to date… (read the full review)