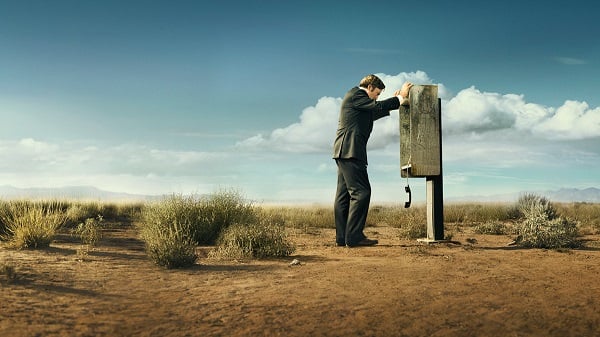 Right from the opening moments of Better Call Saul, Breaking Bad creator Vince Gilligan’s highly anticipated prequel to his aforementioned AMC hit, brows will furrow and heads will be scratched.

Utilizing the cold open format that became a trademark of Breaking Bad, Gilligan places us into an immediately confusing and unfamiliar situation, with Saul Goodman working a low-level job at a Cinnabon. Nothing is made clear initially about this particular fact, and it isn’t until we see his paranoia concerning a somewhat intimidating customer that we draw the conclusion that this scene might even take place after Breaking Bad. Shot in black and white and almost completely dialogue free, this sequence ends with Saul sitting alone in his living room and re-living his glory days while he watches his old TV spots. Note his incognito look: balding head, glasses, and a moustache–a pretty sneaky reference to a certain chemistry teacher

We next jump into a more familiar and recognizable version of our favorite scumbag lawyer, with Saul fervently and passionately defending three young men, manipulating age, sympathy, and emotion to get the jury on his side with his trademark charisma. It isn’t until after his speech is complete that we see this “trespassing” charge from the other side, when the prosecution plays a video showing the boys not only dismembering a dead body but also having oral sex with it. It’s nice to see that Gilligan’s penchant for pitch black humor is as sharp as ever. 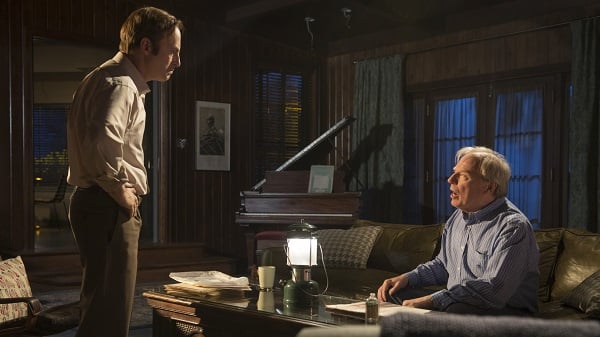 What’s really fascinating about the episode as it moves along from this point is how it continuously sets up and then tears apart any expectation you might have for each scene. Take for example a scene where a couple of skateboarders try and scam Saul out of money with a staged accident. The obvious route to take would be to have Saul be inspired by their trick, and become the Saul we know and love. Instead, he changes gears and calls them on their ruse in a sudden frenetic outburst.

Another example concerns Saul receiving a cheque in his crummy back room office. The cheap-skatey lawyer is seen going back to the parking office to save a mere $3.00 earlier in the episode (with a fun cameo from Jonathan Banks, and one of the episodes funniest scenes) yet he has no qualms about ripping up a cheque for $26,000. Just who is this “Jimmy McGill” (as he is currently known), and what is going on in his life?

As it would turn out, Saul/Jimmy has a brother, Chuck, who is taking time off of work due to mental health issues. Far from your typical case, however, Chuck is suffering from an extravagant form of paranoid delusion concerning his fear of electricity. Here Saul seems to be struggling morally, which is something we’re generally not used to with this character. His choices range from helping his brother to get through his mental illness in hopes he might persevere, or convincing his business partners (also lawyers) to pay him out for his part of the firm (which would also result in a major payday for Saul).

Odenkirk shows exceptional range in this scene, as he seems genuinely torn between his emotional connection and duty to his brother, and his own stress and need to have this situation resolved, and maybe benefit in the process. Compare the genuine honesty and frustration of this character with the showboating scene that preceded it, in which Saul storms into a boardroom and raves like a lunatic as he re-enacts Ned Beatty’s famous speech from Network. 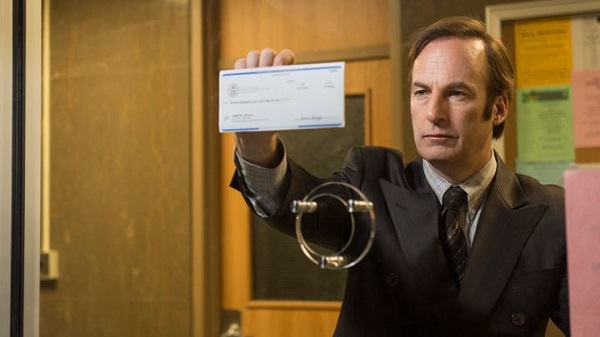 The obvious payoff for this storyline would be to have Chuck take his payout and for Saul to use his chunk of the dough to set up his strip mall law firm. On the other hand, anyone who thinks they have enough expertise to out-think the notorious bob-and-weave writing of a showrunner like Vince Gilligan will often find themselves with their foot planted firmly between their lips.

The final section of the episode retains the audience’s interest but the characterization begins to fall to the wayside in favor of a bit of almost cartoonish hijinks, with the low point being the skateboarding twins who Saul has enlisted somehow hitching a ride on the bumper of a truck and tailing Saul’s mark. Luckily the ending pays for this bit of lunacy with a shocking reveal. With Saul and his merry band of con men now in the unstable hands of Tuco, Monday’s second half of this premiere cannot come soon enough.

Better Call Saul mainly succeeds in its first hour, soaring primarily because of Odenkirk’s surprisingly diverse performance. At this rate it feels like we could have a Walter Jr. spin-off that could make for compelling TV, so long as Gilligan was at the helm. Leveraging off of the love of Breaking Bad but never abusing it, Better Call Saul has made an exceptional debut, and it isn’t hard to see why AMC has already renewed this series for a second season.