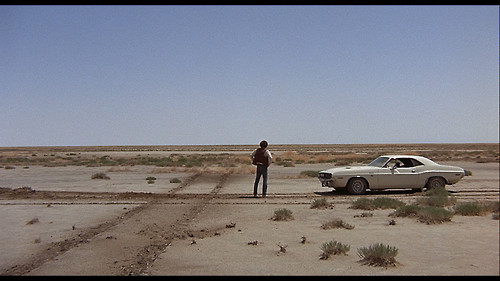 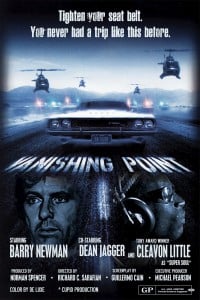 Belonging to countless late-sixties, early-Seventies American counterculture road films, Vanishing Point quickly became a cult classic of the car-movie genre. Richard Sarafian directed this minimalist chase film, starring Barry Newman as Kowalski, an ex-marine, ex-race car driver and ex-cop behind the wheel of a Dodge Challenger – who must deliver the automobile from Colorado to San Francisco in less than 15 hours. After a run-in with highway patrol, a state-wide chase ensues. Along the way, Kowalski is aided by Super Soul – a blind, radio DJ who guides his journey using a police radio scanner. Much like Dennis Hopper’s Easy Rider (1969) and Monte Hellman’s Two-Lane Blacktop (1971), Vanishing Point sought to illustrate the tensions between the counterculture and the establishment, and in this case, across four states 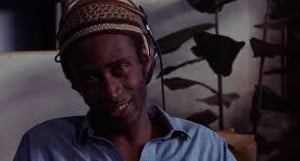 Credit to script writer Guillermo Cain (a pseudonym for a Cuban film critic) who fleshes out his protagonist with little dialogue, and even less back story. Despite the fact that the entire film is essentially a big long chase, we get to know a lot about Kowalski. Some have criticized the movie claiming that our anti-hero is motivated superficially by a bet, but this isn’t necessarily true. His journey isn’t guided by greed or prestige, but something more ambiguous. Kowalski isn’t interested in any cash prize nor bragging rights. Flashbacks to his past reveal he is a troubled and heartbroken man and we also see it on his tired, expressionless face. We know he was honourably discharged from the Marines – he was once a young hero cop jaded by police corruption – he was a world class race car driver – and he lost his girlfriend to a drowning accident. And as the film progresses, we quickly realize he is a kind and helpful man. When a driver swerves off the road, Kowalski stops to help, even if the cops are hot on his trail and when he encounters an old man in the middle of the desert, he goes out of his way to lend a helping hand. When he passes two hitchhikers along the side of the road, he stops to pick them up. 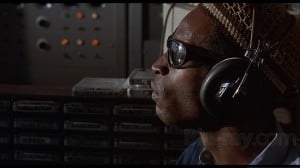 When the camera isn’t on Kowalski and his Dodge Challenger, it cuts back to a radio booth helmed by the aforementioned blind, shaman-like, black DJ named Super Soul (Cleavon Little). As Super Soul cautions Kowalski over the airwaves, he describes Kowalski as ‘the last American hero’. Kowalski, with his distinctly un-American name and his resistance to conformity isn’t as much a danger to America’s highways as he is to an American ideal that bestows little interest in individuality. Eventually his broadcasted support is interrupted by the authorities and taken down by an angry mob in a sequence of race-baiting violence.

Although the film is in constant motion, Kowalski encounters various dwellers of the American outback, including 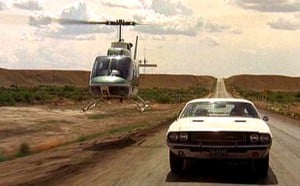 a band of religious revivalists in the desert, a drifter who collects rattlesnakes (Dean Jagger) and a pair of gay highway bandits (who sadly date the picture in the worst way). Eventually he’s aided by a hippie outpost leader (Timothy Scott) and crosses paths with a nude woman riding a motorcycle (a symbol of pure freedom I guess). When he’s propositioned by the Lady Godiva, Kowalski gently turns her down, and when he’s offered drugs to smoke, he passes opting for speed instead (his drug of choice since it keeps him awake for the long haul). These characters remain minor, and despite mostly being stereotypes, by design, they serve to enhance the character of Kowalski and what he stands for. Vanishing Point  works best as an expression of freedom and resistance to bigotry, with Kowalski as a spokesperson for these ideals. 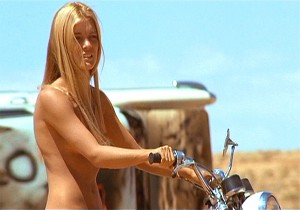 If the zeitgeist symbolism in Vanishing Point seems dated, the film features a number of impressive stunts performed by stunt driver Carey Loftin. It also boats an incredible soundtrack which includes a wide variety of music  ranging from soul, funk, country and rock and featuring artists such as Jimmy Walker, Bubby Doyle, Big Mama Thornton and Mountain. And if that wasn’t enough, Vanishing Point is one of the best looking action films ever made with gorgeous widescreen visuals by future Oscar nominated cinematographer John A. Alonzo.

Kowalski is a man who sees the open road as his only true source of freedom and temporary happiness – a place where he can leave his troubles behind. He isn’t so much running away from law enforcement so much as he is running away from life itself. When he has nowhere left to escape to, he refuses to give the cops the satisfaction of catching him. In the closing minutes of the film, the question you should ask is what has he achieved? Was it all pointless? Maybe he reaches the conclusion that he has nothing left to live for – or maybe, Kowalski truly believed he could make it across the barricade?

Vanishing Point might not deserve to be taken as something incredibly meaningful but as far as arty-B movies go, it is one of the best.