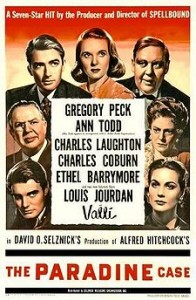 The legendary producer David Selznick was a key figure in Alfred Hitchcock’s career. In an era when the producer was king he was one of the greats, the MGM enlisted executive of Gone With The Wind  in 1939 after a period reviving the fortunes of the RKO studio he was always on the hunt for potential talent both behind and in front of the camera, and he finally persuaded Hitchcock to decant to Hollywood to direct his first American film Rebecca just as the second world war was gathering momentum. The romantic tragedy earned Selznick a second consecutive Best Picture Oscar (although famously Hitchcock never won a directing Academy Award during his long career) after Gone With The Wind  and this prestige heralded a turbulent relationship between the expatriate director and his guiding muse, Selznick often assigning Hitchcock out to rival studios for projects as was the practice at the time for both directors and star talent, with both often being assigned to films they held little or no artistic interest in, yet forced to concur due to the legal frameworks of their lucrative yet aesthetically castrating contracts. After seven years together and ten films under their respective belts the relationship was terminated after the poor box office and critical performance of The Paradine Case, a melodramatic, stage bound courtroom thriller which does not play to Hitchcock’s strengths, although it has its moments within the sexual frisson dancing between its central triangle of leading players, and their growing enchantment leading to a devastating lust and gloomy betrayal.

The Paradine Case opens in high society London as a mysteriously beautiful and elegant society dame  plays the piano with a melancholy grace as her supper is prepared. A knock at the door heralds the arrival of two detectives who arrest Mrs. Paradine (an enigmatic Alida Valli) for the poisoning murder of her blind husband, and she is spirited away to the local jail, defrocked of her expensive garb and jewelry, in a quietly humiliating moment. Assigned to her case is the formidable barrister Anthony Keane (Gregory Peck), along with Gary Cooper and Henry Fonda Hollywood’s then contemporary figure of quiet decency and liturgical grace, happily married to his glowing wife gay (Ann Todd) he is about to have his pleasant life rocked by an all-consuming, implacable lust. Keane soon falls in love with his cryptic client, incrementally  forcing a groaning strain on his marriage and his wife’s affections, as he investigates the case and pulls together the pieces of Mr. Paradine’s last fatal and fateful evening. A further triangle of support characters compress the drama, from Mrs. Paradine’s menacing house servant Andre Latour (Louis Jourdan) who evidently has some dark involvement in the death, from the lecherous Judge Lord Thomas Horfield (Charles Laughton) who is always a treasure on-screen, to prosecution barrister Lord Joseph  (Leo G. Carrell), a Hitchcock favourite supporting player who appeared in six of his movies. For the Hitchcock completest or connoisseur there are shards of interest here, but it’s really not very exciting for the passing fan and I can see why it was something of a flop upon its initial 1947 release, a disappointment which finally convinced Selznick to terminate their contract. It is however something of a masterclass in Hollywood grammar of the time – judicious use of close-ups during dramatic moments, expressionist zig-zag lighting patterns for the prison interior to fame Mrs. Paradine as a lurking, possibly unknown and malevolent presence which contrasts with the bright, high-key interiors of Keane’s opulent family home radiated by his wife’s decent character and breeding. There is one interesting pan and drift at a crucial moment when Latour enters the courtroom  that you can see at 10:15 here, it’s a rare moment of camera dexterity in an otherwise conventionally arranged, rather stilted and flat drama that only really gets going with the third act once the courtroom hearings start proper, and the central mystery begins to gain a nervous illumination. The love triangle is played as melodrama rather than a narrative hook to hang any breathless sense of suspense, with some notions of sexual guilt and feminine inscrutability – Valli is invested with a genuine, uncanny chemistry – bubbling beneath the surface, but it all comes together as Hitchcock needing to fulfil a contract with professionalism and adequate skill, rather than pushing himself as an artist in either the technical, thematic, narrative or psychological fields.