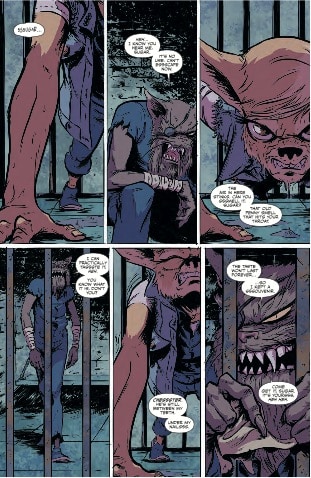 The last issue of Kennel Block Blues left Oliver, Sugar and Charlie anxious to return safely to their cells after having the alarm pulled on them during their attempted escape. After returning to their cells, a planted screwdriver (by those dang cats) in Sugar’s cell causes her and Oliver to be put in solitary confinement. Kennel Block Blues #3 switches between Sugar’s anxious, mental battle of having to deal with the supposed murderer of alpha dog Chester by the teeth and claws of Tinker the mouthing off cat (doing his best Snake impression judging by the eye patch), Oliver’s own mental battle after the ghost of Cosmo joins him on an emotional journey into Oliver’s repressed past, and the tensions felt around the rest of the kennel as a sickness slowly spreads.

Ryan Ferrier really dials up the emotion in this issue that shows his ability to handle the satirical, comic side of the series with some downright, tissue-grabbing moments in this issue. This current issue is a great example of what many series, including minis, need to take pointers from in having some moments to really spend some time with the characters that have been established. Doing this during the penultimate issue really sets up for what is sure to be a great finale. There are some great character building moments for the more major characters like Oliver and Sugar, and a chance to heighten the presence of other characters like Frisky, Charlie, Thibault and Cleo.

See also  The Vampire Diaries, Ep 5.17: “Rescue Me” puts the focus on Caroline 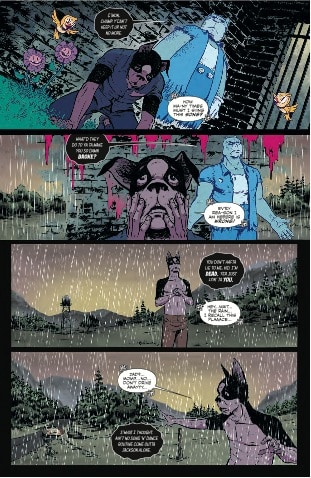 Daniel Bayliss pencils his best issue on the series so far. He has been great at showing detail in the intense, extreme close ups of characters’ faces, masking many of their cute, fuzzy appearances to downright intimidating bite-your-face-off stares. There are some particularly effective moments that allow for Bayliss’s frames to speak for themselves, without any need for dialogue, especially during the moments in which Oliver’s past is revealed before he found himself in the kennel. These panel sequences for an artist are a true testament to their ability to convey so much without the need of any script, sound effects, etc.

Adam Metcalfe’s colourful, nightmarish sequences from the mind of Oliver are still present in this issue but take a backstage compared to the effective use of colour during two sequences. Metcalfe utilizes warmer, glowing colours during the flashback sequence of Oliver’s past to really hit home the emotion being felt behind each panel. Switching from green, to blue, to orange, to pink, back and forth, is a simple yet extremely effective use of colour. The other sequence that Metcalfe’s colours really capture is the tension and desperation of the surroundings when Oliver and Sugar are in solitary confinement. Alongside Bayliss’s intense shadow lines, the slight glimmering glow of yellow from the single light bulb becomes the only lingering colour of hope as Sugar fights to contain her anger at Tinker, and Oliver struggles to find a purpose within himself to carry on.

Colin Bell’s lettering stands out during the heated back and forth spewing of words between Sugar and Tinker. Their words increase in size and change font as their anger builds up, especially as Tinker’s jabs really get to Sugar. The words almost appear to fight to stay contained within the word balloons, only to break free and let out once Sugar can’t contain her frustration any longer.

Kennel Block Blues #3 is a high point for the series so far. What began as a satirical, comedic take on the prison genre through animals in a kennel has turned into an even more emotional story than originally expected. The creative team is firing on all cylinders now so it is kind of unfortunate that the end is nigh with the final issue around the corner. The series is in good hands, so surely the final issue is not to be missed.