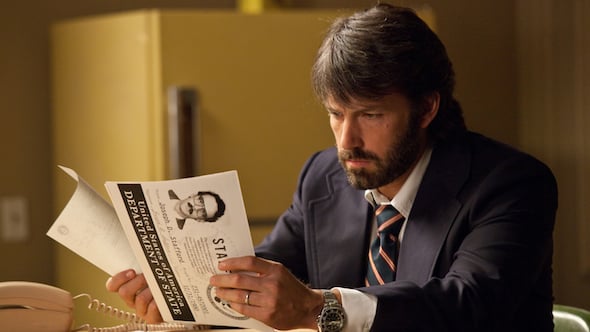 In the pecking order of the Hollywood totem pole the make-up artist would come somewhere between the key grip and caterer, an essential figure in keeping a movie meandering along during its production phase, but hardly the most celebrated of the below the line talent. Some legendary figures of this rarely lauded facet of the movies such as Jack Pierce, Lon Chaney, Dick Smith, Rob Bottin and Rick Baker to name but a few may figure on the cinéastes hierarchy of achievement, but they are not exactly household names along the celebrity alumni they paint and cosmetically enhance on a daily basis. It is no small irony then that make-up man John Cambers and his involvement in one of the CIA’s most audacious missions, to smuggle out a sextet of American personnel from Tehran falling the bloody revolution and hostage crisis of 1980 remained clandestinely concealed until the mission was declassified by President Clinton in the Nineties, with further interest foisted by a redacted article in Wired magazine back in 2007. Some five years later a film has finally been manufactured which recreates the impossible mission, directed by Ben Affleck this is one of the most entertaining Hollywood productions of the year.

Through a gripping, increasingly tense opening the US Embassy in Tehran is assaulted by a screaming mob of disaffected jihadi’s, demanding the return of the Shah who fled into American arms to face justice for his crimes against the people following their countrywide revolution. With distressing echoes of the recent murders in Benghazi the crowds storm and overpower the embassy and kidnap the diplomatic and support personnel, with a mere six officers escaping to secret succor from the Canadian embassy, while a few hundred of their colleagues are arrested, blindfolded and destined to be held in detention for a brutal 444 days of political bartering. Exfiltration specialist Tony Mendez (Affleck) who successfully assisted the Shah and his cronies in fleeing the country is consulted by his superior O’Donnell (Cranston) on potential solutions to the crisis, charged with pursuing all potential plans he crafts an audacious scheme, to whisk the group out through the airport under the guise of a Hollywood production team with Canadian passports, a plan so unorthodox it might just work. Mendez turns to his industry contacts  John Chambers (John Goodman) and his colleague Lester Spiegel (Alan Arkin), a sturggiling B movie producer to provide the perfect cover, to greenlight an existing ‘hot’ Star Wars SF script and populate the Tinseltown press with details of the holographic project, to throw a convincing smokescreen around their secret ambitions. With the deadly stakes established Mendez enters the country and activates his mission, a desperate race against time as the Iranian authorities begin to penetrate the masquerade, and nervous US intelligence also unsure of the mission’s potential success…..

From the opening frenzied and scene setting prologue Ben Affleck’s career resurrection continues apace with this forensically detailed, frequently hilarious edge of your seat thriller, it is quite a deft mixture of spy-crafting subversion, period drama and suspenseful shenanigans, with a few deft stabs at Hollywood chicanery thrown in for good measure. The period detail is convincingly observed, from the nostalgically attuned Warner Brothers logo which heralds the films Seventies derivied ethos, to the costumes and hairstyles, the film builds a tangible universe both in its political ambitions and respect for its audience – at least for most of the mission. The film has been embraced by the critical fraternity for its self deprecating stabs at Hollywood egoism, with lines such as ‘my fake movie is still gonna be a fake hit’ providing some comic relief from the quickly accruing tension that swamps the film in its final, breathless maneuvers, with manic steadicam shots cutting between the bazaars of Iran and the corridors of the Pentagon with a relentless, nerve shredding incredulity – a best editing nomination for Willam Goldenberg seems assured.

The versatile support is convincingly cast and performed, from the genuinely terrified American diplomats to the convivial pairing of Arkin and Goodman (is he now the de rigour cigar chomping Hollywood executive after this and The Artist?) with Clea DuVall and Scoot McNairy in particular shining amongst the brittle and beleaguered quarry, only Affleck seems vaguely out of place with his characters redundant personal arc requiring some empty, emotionless narrative conclusions that dilutes the non-fictional, intrinsic drama. By the same token some Hollywood techniques are employed in the final race to freedom but by this point it’s almost a meta-commentary on film-making itself, with contrived instances of ringing telephones needing to be answered, with updating computers coughing out information at lifesaving moments, all the clichéd machinery of constriction choking techniques in play which becomes so audacious that it will either provoke excited gasps or exasperated groans.

The Academy will lap this up with Argo’s assertion that film and its associated illusions can save lives for God & Country, merged with a little backslapping and some industry specific in-jokes, a deft combination of humour and thrills which oscillates between the two in a rarely achieved harmony, a funny and frantic Friday night product which will indubitably be rewarded next February.