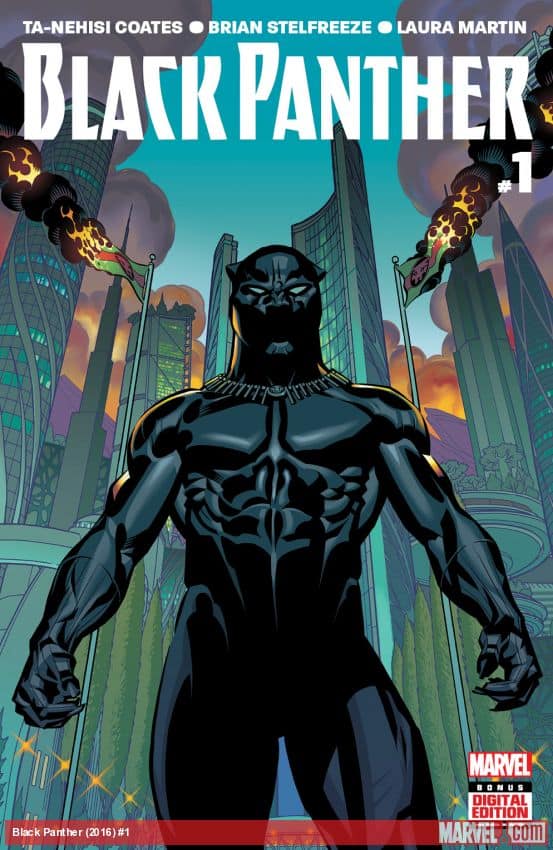 It is only fitting that the first comic written by a political writer deals with one of the oldest questions in politics: should one person rule, or the people? (Or somewhere in between.) The Atlantic politics writer, 2015 MacArthur Genius Grant recipient, and National Book Award winner Ta-Nehisi Coates turns his attention from creative non-fiction to superhero comics with Black Panther #1. And the issue is far from perfect as Coates jumps around from scene relying on his poetic diction instead of making coherent transitions as a character seems to have been executed early on, ends up to be actually in jail, and then transforms into some kind of revolutionary figure in an Iron Man-type suit.

However, veteran artist Brian Stelfreeze (Day Men, Shadow of the Bat) and colorist Laura Martin (A-Force, Astonishing X-Men) definitely have his back and turn Wakanda into the perfect crossroads of Afrocentric science fiction and traditionalism Wakanda is hands down one of the most fascinating ideas Jack Kirby came up with during his long run on Fantastic Four as he made a country in Africa, which was an object of stereotypes or ignored altogether in comics, one of the most technologically advanced in the Marvel Universe, and it was later expanded upon by creators, like Don McGregor, Christopher Priest, film producer Reginald Hudlin, and now Coates and Stelfreeze. Wakanda is a true paradox from the beginning as Black Panther, his step/queen mother Ramonda are interacting with high tech screens with flying vehicles in the background while she feels guilty about condemning Aneka, a member of the Dora Milaje (Black Panther’s female bodyguards), to death because murder (even of a rapist caught on camera) is a capital crime. This incident kickstarts a kind of revolution, and readers might start rooting for star-crossed, death faking, lesbian couple of Aneka and Ayo instead of the monarch of Wakanda.

And Stelfreeze and Martin meld strong emotion with bleeding edge technology in the reunion of Aneka and Ayo as Aneka breaks her out of jail Mark I style. (Sorry for all the Iron Man references.) Stelfreeze shows the relationship through a series of gestures with explosions in the background as Aneka goes from protesting to Ayo about breaking her out and losing her spot in the Dora Milaje to being swept in her arms as Aneka takes the skies. (Maybe comparing the Midnight Angel suit to Falcon’s wings is more applicable.) And while cloaked in the Midnight Angel prototype’s stealth technology (It’s pitch black, a color favored by Martin in this issue.), they share a passionate kiss against a fiery background. 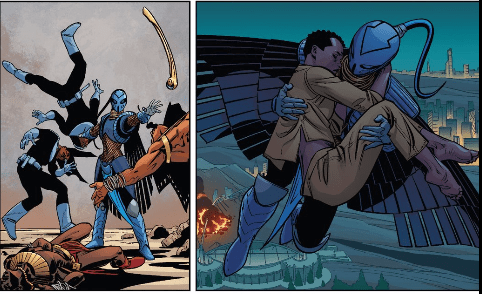 Stelfreeze and Martin can craft setting and feeling, and Coates is just gushing with excellent turns of phrases and even gives Black Panther, the new nickname/title of “Orphan King”, which is apt because T’challa has been off in Necropolis (The special city where the Black Panthers over the years have been buried that makes an appearance towards the end of the issue.) or teaming up with the Avengers and Ultimates. This makes him slightly out of touch with his people and their needs. At the beginning, it seems like the first Black Panther arc is a retread of Priest’s first storyline where Achebe uses power from the demon Mephisto to turn Wakanda against T’challa while he is in New York on business as Black Panther finds out using his special abilities, in another shining moment for colorist Martin, that their souls have been tampered with. But Coates pivots towards the end of the issue by giving Aneka and Ayo reason to rebel against Black Panther’s government with his own weapons and makes the rebellion sympathetic. It is much more nuanced than good versus evil, and Black Panther and the Midnight Angels both have their good and bad points.

Although Black Panther #1’s storyline is rough in places as Ta-Nehisi Coates flits from scene to scene without letting Brian Stelfreeze do an establishing panel at times, it has a strong thematic base in the conflict between monarchy and democracy, and the always universally tradition versus progress. The comic’s cliffhanger is a little less than compelling by throwing in a fan favorite character without any foreshadowing or a hook for the next issue. Coates and Stelfreeze also craft a pair of supporting characters (and antagonists for now) in the Dora Milaje turned Midnight Angels Aneka and Ayo, who are easily the best part of this comic.