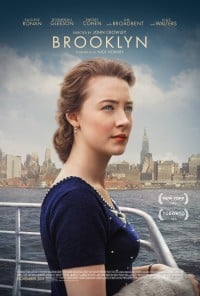 In 2014, writer-director James Gray’s melodrama The Immigrant captured the struggles of immigration in powerful fashion. The film made the most of a moving performance from Marion Cotillard, creating an unforgettable depiction of a woman adapting to life in America. In spite of the generic title, suggesting any number of stories of people coping with the challenges of living in a new country, Gray and Cotillard brought to life a one-of-a-kind and memorable story. By contrast, although the title of Brooklyn, the new film from John Crowley (adapted from a Colm Toibin novel by Nick Hornby), doesn’t directly reference the means by which protagonist Eilis (Saoirse Ronan) arrives in the U.S., it seems to be the only thing the film finds interesting about her.

In 1952, Eilis comes from Enniscorthy, a small Irish town, thanks to the help of her sister, Rose (Fiona Glascott) and a priest named Father Flood (Jim Broadbent). Struggling with the lack of appealing prospects in Ireland, financial and romantic, Eilis hopes to find a better life in the borough of the film’s title. After a tumultuous and stomach turning ocean-crossing, she ends up on Ellis Island, much to the dismay of her mother and potential suitors.

From there, Eilis discovers the joys and hardships of life in America, although the ways in which she does so feel uninspired as the basis of a story. She lives at a boarding house run by matriarch Ma Kehoe (Julie Walters), a woman whose maternal guidance clashes with the cliquish-ness of the tenants. Eilis gets a job at a department store, working under the stringent Miss Fortini (Jessica Paré) and struggles to overcome the shyness inherent in her nature and exacerbated by living in a new country. Her adjustment speeds up thanks to Tony (Emory Cohen), an Italian-American plumber she meets at a dance and who quickly falls head over heels for her. 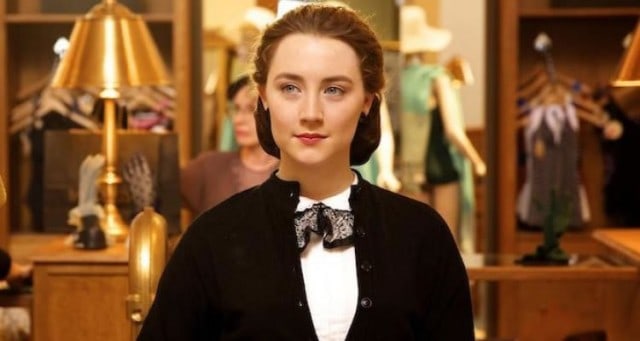 It’s in their relationship, Brooklyn’s ostensible emotional fulcrum, that the film most clearly flounders. Although well-intentioned enough, Tony hardly comes across as a romantic lead capable of propelling a deeply felt love story. Shortly after meeting Eilis, he confesses to having a fetish for Irish girls: not exactly the most swoon-inducing admission. His marriage proposal, coming on the heels of her decision to temporarily return to Ireland, feels more like an act of clingy desperation than a romantic gesture. Eilis’s loneliness in the U.S. makes her reciprocation of his feelings understandable, but the relationship has too many false notes to work as the film’s centerpiece. As the two are on a date soon after they meet, there’s a jump cut in the middle of Tony delivering a monologue about his life, suggesting that even the film doesn’t have much interest in anything he has to say.  Cohen’s affability makes him an appealing presence, but Hornby’s script doesn’t give him enough opportunity to imbue the character with pathos.

Similarly, even though Ronan does an impeccable job conveying Eilis’s isolation and timidity, Hornby doesn’t make her surroundings compelling enough to bring out the character’s depth. Her life in Brooklyn feels too cliché to be engaging or believable, showing little imagination or nuance and making it hard to understand what she enjoys about her new home. She’s surrounded by the detestable women with whom she shares the boarding house, although her spurning of the well-meaning yet hapless Dolores (Jenn Murray) challenges the viewer’s sympathy for Eilis. There’s Tony, of course, but his boyish and ultimately empty charm doesn’t hold up as a convincing temptation for her to stay in Brooklyn. (He can’t write as well as his eight year-old brother, the movie suggests.) As a result, when tragedy brings her back to Ireland and she winds up in a love triangle with rugby-club member Jim Farrell (Domhnall Gleeson), the life he offers seems more appealing than anything she has in America.

Still, the film isn’t entirely a dud, thanks in large part to the performances of Ronan and Cohen. Even if Hornby limits what the two actors get to do, their faces and diction alone engender a certain degree of sympathy for the characters, making the two the brightest and most refreshing aspects of a film lacking in them. As dull as the characters and everyone around them can be, Ronan and Cohen shine through, their talents in search of a better movie.