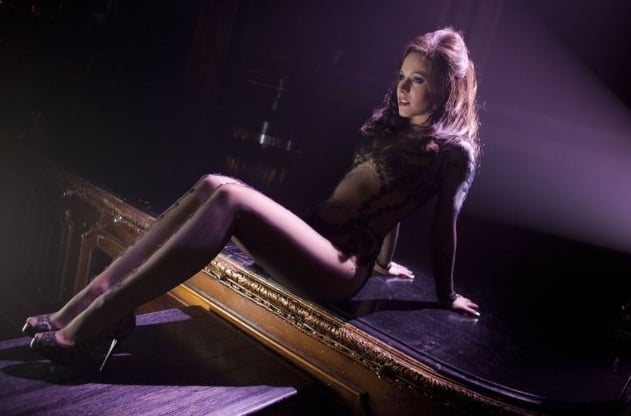 The Golden Globes are now in the past, but the nominees, winners, fashion and controversies all still linger on, dissected in depth and debated obsessively. Among the list of winners is Burlesque’s “You Haven’t Seen the Last of Me,” recipient of the esteemed Golden Globe Award for Best Original Song, edging out fellow Burlesque nominee “Bound to You.”

It seems almost every year a film of this magnitude emerges boasting an incredible line-up, powerhouse performers and spine-tingling songs nabbing up all the awards for songs and music (Dreamgirls, anyone?); yet, most of these movies seem to always lack in the generally originality of plot. No doubt Burlesque is a great movie, but not necessarily for the same reasons other films garner the same attention. The overall presence of the movie—the costuming, dance numbers, music, star performances—all elevate it to that surreal and whimsical level, likened to that of the aforementioned Dreamgirls but also films like Moulin Rouge and Nine (with Moulin Rouge being an exception, a genuinely great all-around movie). There are both surprising and unsurprising things about this film; Christina Aguilera’s performance in the former category and things like ‘small town girl with big voice moves to L.A.’ and obvious romantic blunders and triumphs in the latter. However, chief among these is the composition of the soundtrack—tallied in the surprising column that is.

Aguilera lends her voice to eight of the ten songs, while Cher fills in on the other two, marking her first recordings in over seven years. The songs run the gamut of classic Etta James numbers like “Something’s Got a Hold on Me” and “Tough Lover” to Bob Fosse numbers like “Guy What Takes His Time” to power ballads like “Bound to You,” each choreographed quite aptly to dance numbers within the film. The moments are sexy and provocative; harnessing the sensuality of burlesque dancing and cabaret style music and Aguilera is definitely within her element. There has always been inklings towards her prowess as a burlesque styled superstar: her Lady Marmalade stint and Back to Basics album are all foreshadowing for this acting debut. Aguilera’s voice is an obvious stroke of brilliance in each song she performs; she can capture the aggressiveness and anthemic nature of a song like ‘Express’ and then transform her voice to the sadness and devastation needed in a song like ‘Bound to You’ requires while keeping the consistent quality of voice and tone that has become distinctly Aguilerain in its nature. In reality, Aguilera is such a vastly talented singer that she could sing anything and make it unbelievable, even the ever-clichéd contents of the canonical Songbook. Aguilera has lent her talent not only to singing but also wrote and produced many of these songs as well. It is apparent that she has a gift for understanding the complexities of her voice and its capabilities, nuances, and whatnot, but she seems to have a general love and respect for the burlesque/cabaret style music involved in this film. She (along with other contributors) have produced catchy songs, like “Express” and “Show Me How You Burlesque” that completely capture the burlesque style but are also mixed with modern elements to grab potential commercial appeal. At first this was one of my negative points, that some music was not completely faithful to the cabaret style; however, since there is no concrete era (and seemingly it is roughly present day) it makes sense that some of the songs have been modernized while others have been left true to their original styles, like the James numbers. Aguilera definitely makes a great contribution to the modern styles as she has excelled in that genre for quite some time with her albums likes Back to Basic and Bionic. In actuality, it seems that this movie was just waiting for Aguilera to come and act and sing in it—it is a role she was meant to play and songs that could not have been made without her. She is an obvious performer; maybe not the greatest dancer of them all, but she has a showmanship that is captured within the numbers she sings and performs—her trademark falsetto runs, adlibs and raspy-edged voice—that make her the star of this film.

As mentioned, Cher has recorded her first songs in the past seven years for this film, with “You Haven’t Seen the Last of Me” receiving the Golden Globe Award for Best Original Song. Cher performs the song convincingly, pleading “don’t count me out so fast” as her character is facing financial woes and a tumultuous time. The song is good, but I think it is a bit formulaic in the way it is constructed and the lyrics used, so that it can really hit home with the audience; it surpasses that idea of easy accessibly right into a monotonous checklist of what notes should be used and what clichés should be spoken in order to get the intended visceral reaction from the audience. There is only so much one can compose given the certain parameters of scene content, and I believe it is achieved well, but there are just so many better other songs on the album deserving of recognition. For example, “Welcome to Burlesque,” performed by Cher, is very left field by the album’s standards. It heavily samples Balkan-style music, predominately using strings and a brass section to create a very sultry feel. Cher sings it coyly, matching the subtlety and musicality of the song and really it is just a nice addition and solid recreation of some classic burlesque-style music.

I find this soundtrack highly enjoyable because personally, I like watching dance movies and I like watching themed musical dance movies—not everyone’s cup of tea. But really, for those people who did not enjoy Burlesque, this movie was not really made for you. Probably the creators and actors of this film had dreams of such successes as Jennifer Hudson in Dreamgirls and Liza Minnelli in Cabaret, and Aguilera’s performance is certainly compelling and convincing, but it is just not going to happen. The kitsch and camp of this film, as well as overall unoriginality, inconsistencies and poor moments, override the credibility of it. Burlesque is a concept movie and it performs it well, the music is great as stated and so are the costumes and dancing but it falls flat in other respects (plot, dimensions and proportions of sets, originality) which may seem moot, but not if they are gunning for acceptance. There are wonderful musicals that transcend the lines of genre and concept—Liza Minnelli’s Academy Award Best Actress-winning role in Cabaret for one—but sadly, this is not one. Nonetheless, Burlesque, to me, is a film that is meant to be fun and a little scandalous where the performers and collaborators gave all they had, and their work payed off.