This much should be clear: watching five athletes, aged eighty-three to one hundred, compete in a world track and field event is impressive. Their stories are moving. Their aspirations are inspiring. They put more effort into living life to the fullest than most of us put into being awake.

Autumn Gold leaves something to be desired, and I hate having to write that. Though there are many, many beautiful moments – a German athlete struggles to crack a shot put world record, an Italian woman befriends her rival in discus, an Austrian man undergoes painful knee surgery but competes anyway – but there are also many tedious moments. It feels as though the filmmaker simply collected ninety minutes worth of footage and strung it all together, irrespective of worth or narrative arc. It is important for a documentary to pick its moments and leave the rest out. Perhaps, if Autumn Gold would be recut (and trimmed down), it would work better. 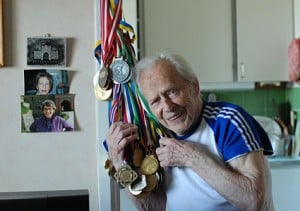 This is not to say that the stories in Autumn Gold are not worthwhile; rather, they are incredible. I expect that everyone in the audience felt a bit intimidated by Alfred Proksch, a centenarian who spends his time winning gold medals and drawing the naked women who pose for him – seriously. The audience cries when Ilse Pleuger very nearly breaks the world record. The audience laughs when Herbert Liedke tries to glare down his rival. However – and again, I hate to have to write this – odd choices and bad cuts on the part of the filmmakers do nothing but diminish these stories. Watching Alfred Proksch throw a shot put is already inspirational – cutting to a shot put sailing into the sky is unnecessary and unwanted gilding.

Autumn Gold is a beautiful story inadequately told; not much more can be said.