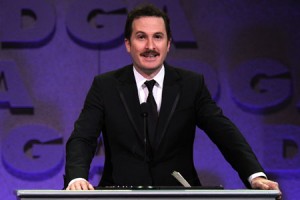 What’s a man to do after such a wonderfully intense year of having his film Black Swan be judged on numerous occasions/awards ceremonies and garnering just as many accolades? He is going to judge other films. Darren Aronofsky has been handpicked to be the president of the International Jury for the Competition at the 2011 Venice International Film Festival.

As many have cited, it is not Aronofsky’s first trip to the fest, it will be more of a journey come full circle as Black Swan premiered there last year as the opening film in competition. Another one of the director’s Oscar-winning films, The Wrestler, brought him to Venice in 2008 which led to it winning the fest’s coveted prize . Now on the other side of it, Aronofsky will be a working part of the festival that runs from August 31 to September 10, 2011. Skim the full press release from the Festival gushing about the acclaimed director below.

Oscar nominated American director, producer and screenwriter Darren Aronofsky (author of the opening film of the 67th Venice Film Festival, Black Swan, and winner of the 2008 Golden Lion for The Wrestler) – a key figure in contemporary film, whose work constantly engages the evolution and mutations of the many languages of art – will be the president of the International Jury for the Competition at the 68th Venice International Film Festival (August 31 – September 10 2011). The International Jury will award the Golden Lion and the other official prizes.

The decision was made by the Board of Directors of the Biennale di Venezia, chaired by Paolo Baratta, which accepted the recommendation by the Director of the Venice International Film Festival, Marco Müller.

Darren Aronofsky garnered extraordinary critical and commercial success worldwide for Black Swan, a film that was able to infuse the sensibility of the boldest independent cinema, which shaped Aronofsky’s early years, with mass appeal, and to combine the pulp universes of melodrama and horror with a totally original and sophisticated artistic vision. Dedicating the cover of the February 2011 issue to the film, the magazine Cahiers du Cinema described Aronofsky as the “leader of a new generation”. Black Swan, which upon its release established a new box office record for Fox Searchlight Pictures, received 5 Oscar nominations including best director and best picture and 4 Golden Globe Award nominations. Black Swan swept the Independent Spirit Award (the Oscars of independent filmmaking) winning best feature, best director, best female lead and best cinematography.

Natalie Portman’s magnificent interpretation, which had previously moved the Venetian public and was acclaimed by critics all over the world, won her the Oscar as Best Actress, the Golden Globe, the BAFTA (the British Oscar), the Independent Spirit Award, the Screen Actors Guild Award and prizes from the major associations of film critics.

For his earlier work The Wrestler (2008), Aronofsky was awarded the Golden Lion at the 65th Venice International Film Festival, and later won the Independent Spirit Award for best feature. For his memorable, heart-rending interpretation, the star Mickey Rourke won the Golden Globe, the BAFTA and the Independent Spirit Award, as well as an Oscar nomination, and prizes from all the major associations of film critics.

Darren Aronofsky made his debut in 1998 with π, earning the prize of best director at the Sundance Film Festival and best screenplay at the Independent Spirit Awards. His second film, Requiem for a Dream, from the novel by Hubert Selby Jr. was presented at Cannes in 2000, and later won wide international recognition, including an Oscar nomination for Ellen Burstyn as best actress. The formal audacity and visceral quality of the film have made it an important point of reference for young filmmakers.

In 2006 Aronofsky participated in the Competition at the 63rd Venice International Film Festival with The Fountain, a romantic and psychedelic science fiction film starring Hugh Jackman and Rachel Weisz. Premiere Magazine’s Glenn Kenny stated that The Fountain, “may well restore your faith in the idea that a movie can take you out of the mundane and into a place of wonderment.” Since its release The Fountain has garnered a highly devoted fan following becoming a true cult sensation in the world of cinema.