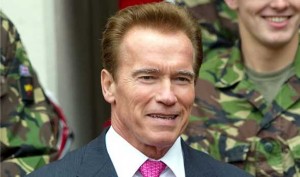 2009’s installment in the saga against Skynet Terminator: Salvation, resulted in more of a mixed bag than anything. Audiences were left wondering where this would leave the franchise as much negative reception spread. Now per Deadline, it’s revealed that the wheels have begun spinning for the next chapter in the Terminator universe with a glimmer of hope. Original star Arnold Schwarzenegger is attached to star in a rights package being presented around Hollywood studios with a rumored purchase price of $36 million and an upfront project price  of $25 million, by the Governator’s agency reps at CAA.

California hedge fund Pacificor originally snatched up the rights from previous owners Halcyon, at their bankruptcy auction in February 2010. The assumption is that Pacificor waited until now to make their move is due in part to Arnold Schwarzenegger’s recent departure from politics and subsequent return to acting. There is already strong interest from several major studios such as Lionsgate, Universal, Sony and CBS Films but at this point there is no screenwriter attached and Justin Lin, the helmer of recent box office hit Fast Five, is being strongly considered for director. Anyone hoping for any interest/involvement from James Cameron will have to wait a while, as the rights that he signed over after The Terminator only reverts back to the original owner after 35 years (in 2018) by copyright law and with a focus on his latest epic franchise Avatar, that is unlikely.

Can the next sequel move beyond Salvation’s McG directed mess? With a fresh pair of eyes and the return of the Terminator’s most iconic face, it just might give the fans something to look forward to.