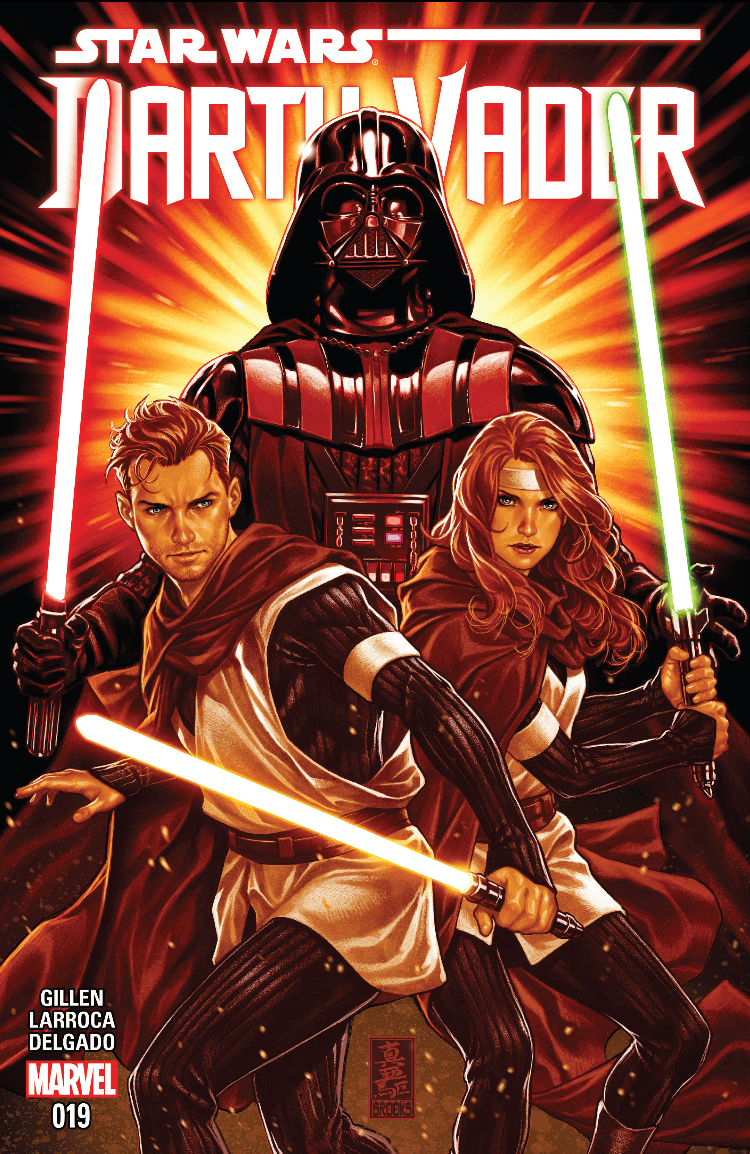 “Fear is the path to the Dark Side. Fear leads to anger. Anger leads to hate. Hate leads to suffering.”

A major plot point in the previous issue of Kieron Gillen’s Darth Vader revolved around the inability of droids to utilize the Force. It was Triple-Zero’s hypothesis that this results not due to their absence of life – a word he decries as “abstract nonsense” – but rather due to droids’ lack of blood. He reasonably concludes from such a premise that, given blood, preferably forcibly stolen from the Empires enemies, droids would be able to utilize the Force. Vader, dogmatic in his orthodoxy to a heretical sect, strictly forbids the technological and theological innovation.

Cut to the current issue, which begins with Triple-Zero delivering a motivational speech to a legion of battle droids preparing for their last stand (delivered, in the theater of one’s mind, in the charming tenor of Anthony Daniels, his tone slightly more sinister and significantly more sardonic than that of Threepio):

This garners enthusiastic refrains of “Slay the meaty ones!” all of which achieves Triple-Zero’s intended effect. Upon Vader’s return to the front, the protocol droid explains:

“Somehow our foes became convinced they were fighting blood-fueled leech droids! It seems to have a quite profoundly negative effect on their morale… It seems an idea is a powerful thing.”

In that revelation, Triple-Zero proves himself every bit the philosopher and theologian as Yoda is shown to be. Whereas the later emphasizes the subjective experience of fear, the former focuses on its instrumentation and weaponization. This is the far more significant connection between the forces of evil and the emotion of fear in the films. Apart from Anakin, actual agents of the Dark Side (such as Palpatine, Maul, Dooku, etc.) are defined not by any fears they suffer (most are brimming with bravado and confidence) but rather by the terror they inflict. Such is true even of Vader, who’s threats to convert Leia strike at the heart of Luke’s fears, cutting him more deeply than the Dark Lord’s lightsaber ever does. In this sense, even without feeling the Force, Triple-Zero knows it, understands it intimately, and through inflicting terror demonstrates a devotion to the Dark Side specifically and not merely evil in general.

Moreover, it is a correction to the droid’s previous materialism, the refutation of which has been a repeated theme in Gillen’s run. It is of the utmost significance that the same character who’d previously dismissed “life” as “abstract nonsense” is an issue latter affirming that “an idea is a powerful thing” (emphasis changed). Fear is no more tangible than life, yet here Triple-Zero acknowledges both the reality and utility of an idea. It would not be surprising if the droid did come to develop a mastery over the Force, keeping with the series’ message of mysticism and spiritualism triumphing over technology.

The main current of that theme throughout the series has been in Vader’s rivalry with his irreligious replacements. That storyline sees significant developments in this issue as well, with the unbrotherly betrayal by Morit in assassinating Aiolin, his twin sister. That Vader’s foes would fail and fall was foregone before the series’ start; the more interesting aspect comes toward the issue’s end, in a seemingly unrelated conversation between the Sith Lord and Queen Trios. The young monarch states with deadpan self-deprecation, “I’ve found inexperienced youth not expecting power the most easily to manipulate,” ostensibly in reference to her appointment of Baroness Bixene, but obviously commenting on her subservient relationship to Vader, who’d similarly place her in power not long before. Vader’s reply of “You are correct” similarly holds a double meaning, revealing the infighting between the Astarte twins to be of his own design.

As such, issue #19 in particular and the Shu-Torun War as a whole have proven excellent examinations of the character of Vader, demonstrating his dogmatic “devotion to that ancient religion,” his masterful manipulation of allies and adversaries alike, and the very genuine threat he posed to Luke throughout the Saga through his successful corruption of “inexperienced youth not expecting power.”