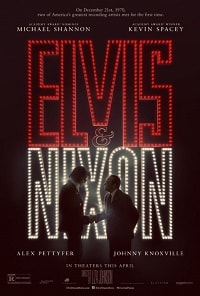 What happens when the President meets The King? Thanks to the new historical dramedy Elvis & Nixon, we have some idea how it might have gone down.  Director Liza Johnson throws in some Elvis karate and Nixon blustering, but this is a surprisingly restrained comedy that prefers understated yucks to obvious pratfalls.  The result is pleasant enough, yet oddly unsatisfying.  Mostly, this is an actor’s showpiece for Michael Shannon and Kevin Spacey to collide in the most bizarre power summit in pop culture history.

It’s no exaggeration to say that Elvis Presley (Shannon) and Richard Nixon (Spacey) are the two most imitated and lampooned celebrities of all time. Their notorious mannerisms and larger-than-life personalities make them easy targets.  It would take a perverse act of patriotism, however, to bring them together on December 21st, 1970.  Armed with good intentions and ungodly firepower, Elvis suddenly appeared at the White House gate and demanded an audience with the President.  This was before Nixon developed his disastrous proclivity for audio recordings, so their conversation remains shrouded in mystery.  All we have is a famous photo of the two icons shaking hands; purported to be the most requested photo in the National Archives.

Elvis & Nixon is a movie that specializes in silly grins and quiet chuckles. What might have been played for broad comedy is, instead, thoughtfully observed as the historical anomaly that it was.  How did these two men—on polar opposite ends of the social spectrum—ever come to meet in a sane, rational world?  They didn’t.  This was a world on the brink of hysteria; plunged into madness by a Vietnam War that was hemorrhaging lives and popularity by the day.  Elvis can barely contain his disgust as he watches televised images of anti-war demonstrators, Black Panthers, and long-haired hippies badmouthing his beloved America.  “Do you think there’d be an Elvis Presley if this country was communist?” Elvis sincerely wonders.  After he empties his massive pistol into the television, he resolves to infiltrate the counterculture as a ‘Federal Agent at Large.’  Yeah, he’d get a special badge and everything. 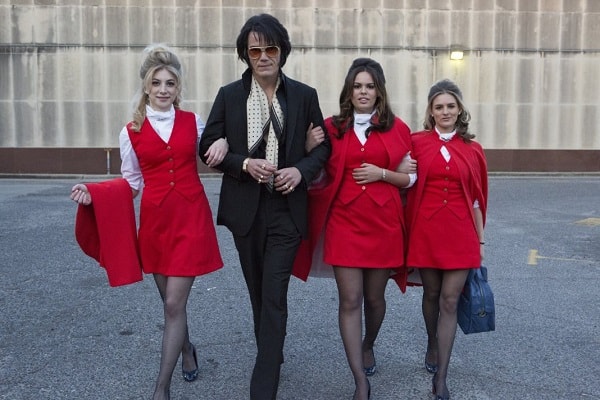 Co-writers Joey Sagal, Hanala Sagal, and Cary Elwes spend a great deal of time on the prelude to the historic meeting. Elvis takes center stage for the film’s first half, collecting his childhood allies, Jerry (Alex Pettyfer) and Sonny (Johnny Knoxville), and then bargaining with Nixon aide Egil Krogh (Colin Hanks) to get some face-time with the President.  Krogh would eventually write a book about these events (unspectacularly entitled, The Day Elvis Met Nixon), but not before authorizing the burglary of the Watergate Building in 1971.  These scenes are only intermittently interesting.  Particularly tiresome is Jerry’s obsession with getting home to Los Angeles so he can meet his fiancée’s parents.  Jerry is clearly intended to be our relatable anchor, but it’s hard to care about the problems of a ‘regular Joe’ when Elvis is in the building.

Luckily, Michael Shannon is there to carry the load in stellar fashion. Shannon wisely foregoes competing with great Elvis impersonations of the past (see: Bruce Campbell in Bubba Ho-Tep).  Instead, he uses his trademark ‘Shannon intensity’ to humanize a fading star who’s desperately trying to justify his mythological status.  When Elvis relays the story of his stillborn twin brother, lamenting that he alone received the good fortune intended for two people, you understand why all those law enforcement badges and gold records mean so much to him.  Shannon dominates every scene with his gravelly voice, unkempt hair, and imposing frame.  He’s so damn good that he doesn’t need a dime-store impersonation to become Elvis. 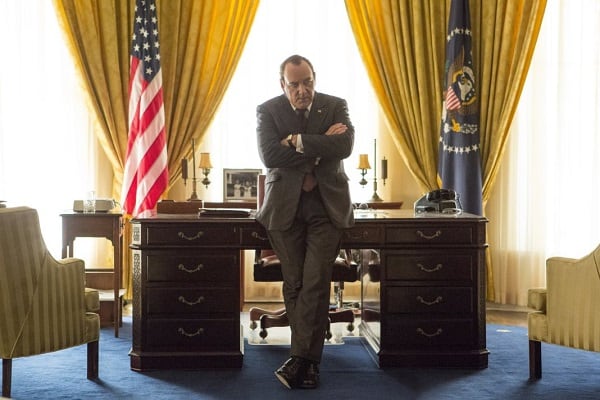 Things really start popping once Nixon hits the scene. Spacey is all hrmph and flop sweat, playing Nixon as a fascinating mixture of pragmatism and delusion.  He’s the kind of man who recognizes the importance of hard work, and yet wonders aloud when he hears of Elvis’s black belt in karate, “Do you think I could take him?”  The only reason he even agrees to meet Presley is to curry favor with his disapproving daughter.  It’s a wonderful performance that feels deceptively easy for a veteran like Spacey, who knows just when to push Shannon for dominance and just when to yield the screen to his co-star.

Like two brothers in paranoia, Elvis and Nixon bond over perceived slights and invisible enemies. Their meeting is everything the film’s title implied and its uproarious trailer promised.  It’s so good, in fact, that you’re left wondering, “Why didn’t we reach this point 30 minutes sooner?”  Like some lukewarm pizza; it tastes okay, but it would have tasted much better when the cheese was all melty.  In other words, the filmmakers wanted gourmet when fast food would have really hit the spot.

Elvis & Nixon is a great chance to see two wonderful actors butting heads, if only for a short time. It’s almost heartbreaking that it never fulfills its comedic potential.  The most surreal photo-op of the 20th Century might be worth a thousand words, but Elvis & Nixon only captures a few of them with the required pizazz and energy.  The rest just feels like a half-developed Polaroid snapshot.