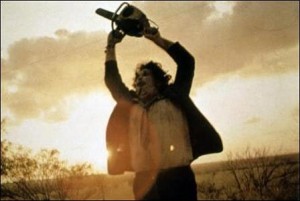 according to TotalFilm. Following Michael Bay’s 2003 and 2007 attempts will be the unsurprisingly named  The Texas Chainsaw Massacre 3D due out October 5, 2012 from Lionsgate.

John Lussenhop, who most recently was at the helm of the 2010 heist actioner Takers that starred Paul Walker and Matt Dillon, is in the director’s chair for Massacre 3D. Producer Carl Mazzocone was more than elated when speaking about the upcoming reboot and of Lussenhop, saying “I’m excited to reconceive this iconic horror classic in a contemporary setting for a new generation of horror fans to enjoy. Both John Luessenhop and I intend to deliver a new chapter derived from Tobe Hooper’s 1973 masterpiece with the goal of making it as horrifying as the original, in 3D.”

No other solid details are known about The Texas Chainsaw Massacre 3D but taking this with a grain of salt, apparently there are already spoilers and details about the plot (Potential spoiler alert!):

“The new film, set today, will see the authorities and some angry townspeople ambushing the Sawyer home – where Jeb Stuart is accused of carrying out his butchering.

Hooper, the local by-the-book sheriff, had agreed to give Leatherface/Jeb Sawyer a fair trial and grant him a good lawyer…. But that’s before local mayor Burt Hartman, an imposing town tough-guy, arrives with a mob to see that the murderer/s don’t even make it past their front door. Though they both want justice, Hooper and Burt have different methods. Things escalate when Burt’s mob start tying ropes to trees, prepping for a hanging, and ultimately throw a flaming cocktail into the Sawyer home… burning the place, and it’s residents (including Jeb’s father, Drayton, played by Bill Moseley), to the ground. Goodbye Sawyers… goodbye Leatherface?”

All this according to What’s Playing. For further details of so-called spoilers check it out here.

Ready for ANOTHER horror classic remake/reboot/redesign/relaunch October 2012? Or has the proverbial horse been beaten to death?