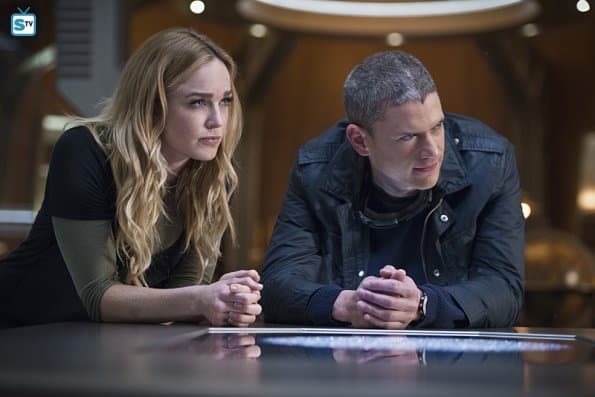 There’s a lot of atmosphere and psychological drama that can be mined from the era of paranoia and suspicion known as the Cold War, in which two superpowers (the U.S. and the Soviet Union) played chess with each other (FX’s The Americans mines these riches effectively). As a quick stopover on Legends of Tomorrow‘s latest episode, however, it produces only tired cliches and predictably militaristic villains. This episode is the first of the series with no writing credits from either Greg Berlanti or Marc Guggenheim, and very little in it works.

The first and final scenes of this episode are the strongest. Legends of Tomorrow has settled into a pattern of opening with a group action scene, in which the whole team carries out a mission or participates in group combat. Because it’s the only time each episode when the whole team is onscreen/participating, these are generally the episode highlights. In this one, the team breaks into the Pentagon in order to steal information about Savage. It’s fun, and any kind of heist/undercover operation is solid television fodder for a strong episode, but the sequence is rushed and quickly abandoned rather than developed into a full arc. Half the fun of any onscreen heist for viewers is the preparation, with the requisite voice-over explanation of the plan to a montage of practice sequences, group training, and/or equipment gathering.

In this episode, the plan is barely explained, obstacles that must exist are not even mentioned (why didn’t Ray just shrink into the Atom and steal the information? How did they get into the Pentagon? How was Mick able to pass a soldier without being registered by the other soldiers as a stranger? Do any janitors actually work during the day?), and it serves only as a quick opening sequence. As satisfying as it is to see the women on the show convincingly take on the role of high-ranking officers for the heist, instead of being cast as the eye candy or, God forbid, the janitors, the job itself seems poorly conceived and hastily planned, and it’s not at all surprising when it all falls apart.

The episode introduces a subplot of Kendra struggling with her inner demi-goddess (Bridget Jones approves this sentence; there are times this show is unbearably over-the-top), and while Kendra as a character needs more development, this is exactly the same plot as Sara struggling to deal with her bloodlust. You only have two female characters, Show: you couldn’t come up with two different storylines for them? Despite having six male characters you’ve (mostly) managed to give differing emotional backgrounds and storylines to?

Nonetheless, the scenes between Kendra and Sara are among the few that do work in the episode, because there’s a complex conflict between two members of the team, and both actresses commit fully to the physicality and raw emotion required. A line at the end of the episode cleverly attempts to explain away the similarity of the two women’s arcs, as Kendra tells Sara that while she needs to embrace her inner goddess, Sara needs to embrace her human side. This is somewhat accurate, but can’t gloss over the fact that at the end of the day, both women struggle to contain an uncontainable violence, a striking similarity in story arc that shortchanges both characters. 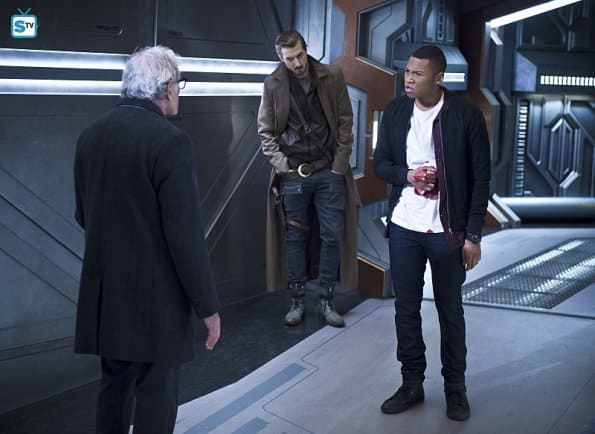 Speaking of complex conflict between two team members, the only remaining aspect of the episode that kind of works is the long-delayed showdown between the two halves of Firestorm. Victor Garber is easily the actor with the most gravitas on the show, and perhaps the only one whose skill/presence is used to the fullest extent, since Stein is consistently given internal and external conflict and drama, particularly with his “other half,” Jax. Jefferson’s simmering resentment at the older man’s presumption and dominance comes to a head, and we’re given a look both at Jefferson’s internal torment over essentially abandoning his widowed mother, and the reason that Stein pushes him so hard – he’s terrified of losing another young man under his watch the way he lost Ronnie.

The rest of the episode is a loosely-linked series of subplots that are variously nonsensical and as stale as month-old bread:  the Soviets are creating a “Soviet Firestorm”! There’s a reactor that must be deactivated/removed from Soviet hands! (Isn’t there always, Show, isn’t there always.)

Kronos, the Time Masters’ bounty hunter, reappears, and disappointingly proves to be a very ineffective villain, easily bested on both sky and ground by the Legends/Rip Hunter. Druce, Rip’s old mentor, attempts to convince him to give himself and the team up. The Rip/Druce relationship, having never been mentioned/developed onscreen before, feels unearned, and in fact all aspects of the story having to do with the Time Masters so far are undercooked and feel irrelevant.

A poorly written, and poorly edited episode that appears to be limping toward the finish line takes an unexpected turn at the end, however. Some members of the team end up in a very unpleasant situation and then are left there, simultaneously upping the stakes and ending on a cliffhanger. With three of the team’s members locked up in a very nasty Russian prison, the rest of the team suddenly has major incentive for the mission of saving them, and personal stakes beyond the generic “save the world!” Martin, Mick, and Ray’s upcoming suffering could also bind the three individuals together, and flesh out their characters further. A surefire way to make viewers empathize with your characters? Hurt them. Make them suffer.

A limp episode ends with a twist that may inject enough energy to jolt the next episode to something more closely resembling entertainment.

There’s no chance Ray dies in prison, is there?  Or escapes and decides the Atom’s life is not for him? The man is as dull as dishwater.