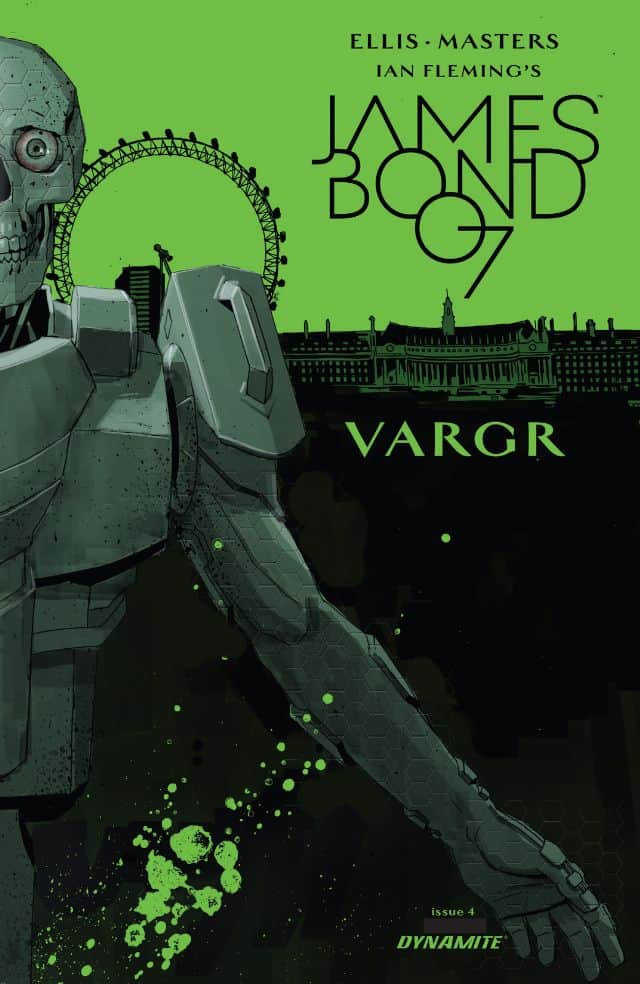 When we last saw secret agent double-oh seven he was relaxing at a hip Berlin bar after barely escaping with his life from a storage hanger operated by a gang named Al-Zein. Now, on his way back to ‘the office’, he is intercepted by Kurjak’s experimental warrior Masters. The latter presents himself as an employee of the station, warning Bond that they’ve been hit by Al-Zein (readers will remember that in issue #3 it was Masters himself that cleaned out MI6’s Berlin headquarters) and must take refuge somewhere else. Much to Bond’s surprise, Masters walks him to Kurjak’s laboratory. Proverbial alarm bells ringing off in his head, alerting him that something is obviously amiss, our hero decides to take matters into his own hand and battle Masters one-on-one and, provided he make it that far, finally uncover what the real culprit behind the newly imported drugs into Britain is after.

And so with issue #4, knowing that the at least the first few storylines of Dynamite Entertainment’s James Bond 007 series will consist of 6 issues each, the plot enters the second half, running the first leg of the home stretch. At this stage readers are getting a rather sound impression of what this series will be like. There isn’t a huge amount of story that can be told in 6 issues. With each individual book running 24 pages, it leaves a grand total of 144 pages to present new characters, tell a story, provide twists and turns, and of course offer a series of high-octane beats in which Bond fights, chases or flees a series of baddies. It’s certainly an attainable objective, and an interesting challenge to be sure, only that incredibly intricate plots might not be on the order of business. By the end of this new chapter, it is made very clear what the drug infecting Britain’s slums consists of, who manufactured it, and why. Granted, there are still 2 issues remaining (and one important character is notably absent in issue #4. One assumes they will be making a return before the dust settles), so there is still time for another surprise, but on the whole the adventure is fairly simple stuff.

See also  'On Her Majesty's Secret Service' - a challenging, invigorating and romantic piece of action filmmaking

On the flip side, Bond adventures need not be complicated. As a debut arc, things are moving along rather nicely thus far. Perhaps writer Warren Ellis and publisher Dynamite Entertainment intended to start things off modestly to test the waters, reserving bigger bangs in the next series. Whereas the overall story is nothing to sing the highest praises for, what the book consistently gets right are the smaller moments, the little character beats that flesh out protagonists and antagonists so as to make them that much more memorable. A brief interaction between Bill Tanner and M makes quite clear what personality each conducts himself with. Better still, Warren Ellis grants fans with one of the loving staples of the James Bond brand: a villain’s monologue in which he plainly states what his background and endgame are. No true Bond villain can ever forsake the opportunity to supply 007 with all the information pertaining to his or her plan just before killing him. Why not kill him immediately? Well, in the movies it makes such scenes much more amusing. In this book, Kurjak actually has a logical reason for stalling, which is a really nice touch.

This fourth entry also continues to harken the point that the comic book Bond is a far more violently inclined anti-hero than his cinematic counterpart. At one point the protagonist has the opportunity to put someone out of their misery the quick and easy way, yet prefers, albeit for certain strategic reasons, to make said death slow and excessively painful. There are a few demises in the Fleming books that gets one’s skin crawling, but the one depicted here is practically on the same source material level as far gore and insufferable pain are concerned. Evidently enough, for this version of James Bond, the ends most certainly justify the means, especially if those ends will increase the odds of the mission success.

Jason Masters continues his stellar work at bringing the world of James Bond to comics. He and colourist Guy Major are a wonderful tandem, as they strike an incredible balance between filling the panels with the necessary details to make the world realistic enough for readers to engage with, whilst selecting key panels for which very specific elements will be highlighted, sometimes with special colour grading to emphasize the point. Arguably the moment that most fans were waiting for was the confrontation between 007 and Masters, who serves as this arc’s Jaws of sorts. For these pages artists Jason Masters and colourist Guy Major really go to town, tossing their creations across the room, capturing every single vicious blow to the chest, groin and elbow. The book’s final few pages see Bond trapped in a terrifying predicament and, without giving it away, the art stupendously brings the sense of imminent danger to life off the page.

Everyone knows that Bond survives his missions. He isn’t the sort of character franchises kill off only to resurrect a few months or years down the road. 007 is, essentially, immortal, but without the cheap shock value of ‘deaths’ that will clearly be reversed shortly thereafter by fantastical means. Part of the fun is witnessing how he remains alive despite the odds, with special joy provided in discovering how he flees traps laid out by his enemies. Whatever happens at the start of issue #5, odds are it will be a corker.