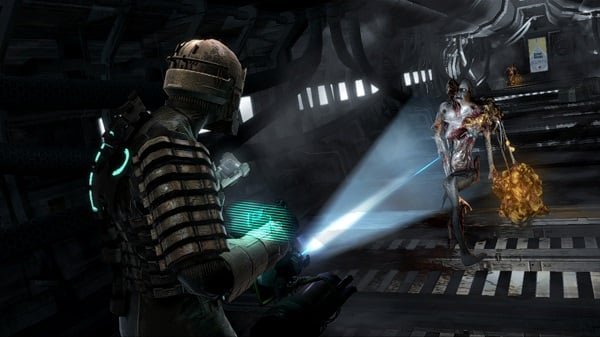 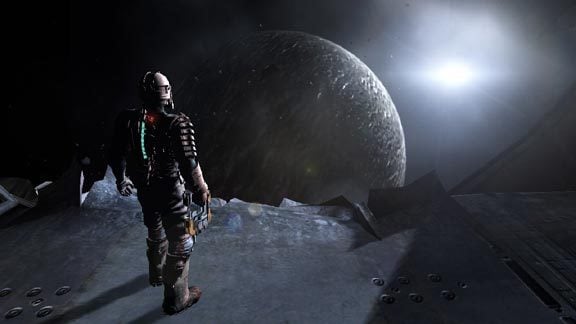 Upon its release in 2008, there was little to indicate that the original Dead Space would be anything other than a limp trudge through stock horror. After all, it hailed from the development studio EA Redwood, a team at the time best known for releasing a succession of deeply ordinary takes on the cash cow Simpsons, Godfather, and James Bond franchises. However, the opportunity to forge a brand of their own seemed to give EA Redwood fresh impetus, with Dead Space soon emerging as one of its generation’s finest third-person shooters.

That said, it is still immediately apparent that Dead Space brings to the table a paucity of original thinking, instead taking thinly veiled inspiration from various classics of both game and film origin. Apparent is the-then hugely influential Resident Evil 4 in everything from the weapon upgrade system to the perfunctory puzzles, Alien in the routine-expedition-gone-horribly-wrong storyline, Half Life in the permanently mute lead, 2001: A Space Odyssey in the mysterious ‘Marker’, the Bioshock series in its blood drenched motivational posters of inanely grinning models, and so on. And on. In fact, for any observer even remotely familiar with the horror or science fiction genres, Dead Space at times resembles little more than an interactive greatest hits compilation. 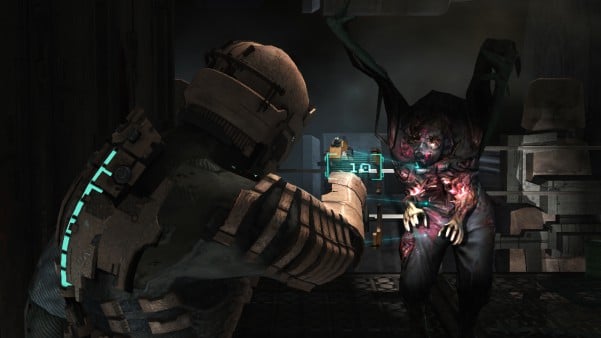 Purely taken in gameplay terms though, it is Resident Evil 4 that provides the clearest inspiration, right down to Dead Space’s rather familiar over-the-shoulder sight lines. In 2008 the shadow of Capcom’s modern classic still loomed large over the third-person genre, as particularly evidenced by Dead Space’s emphasis on efficient inventory management as the key to the successful dispatch of your numerous assailants. However, whereas the archaic controls of Resident Evil 4 divided opinion even at the time, Dead Space is far more nimble on its toes. Protagonist Isaac Clarke maneuvers while shooting and switches weapons in real time; simple innovations sure, but ones that push the game beyond the peers of its era in the evolutionary stakes. And, while these modern niceties might threaten to grant the player too much of an unfair advantage in combat, the cramped, claustrophobic interiors of the space station soon put paid to any such complacency.

It proves disappointing then that the backdrop to all this delicately pitched gunplay is a rather well-trodden storyline. The opening video depicts the player character and colleagues making an unconventional arrival upon a deep-space mining ship, whereupon it quickly transpires that the entire crew has been decimated by a rather inconvenient outbreak of bloodthirsty monsters. Ho-hum. By the time it is revealed that the hero’s love interest has conveniently managed to get herself embroiled in the chaos, the player could be forgiven a rolling of the eyes. Yet, to the game’s credit, matters soon take a rather more psychological and subtle turn, with Tarkovsky’s Solaris liberally pilfered from. Nevertheless, each supposedly shocking betrayal/murder/explosive alien garroting is generally visible on the plot horizon light years in advance. Still, for a game based around the age-old formula of shooting things in the face, Dead Space proves pleasingly adept at wringing enjoyment from even this most rote of formats. 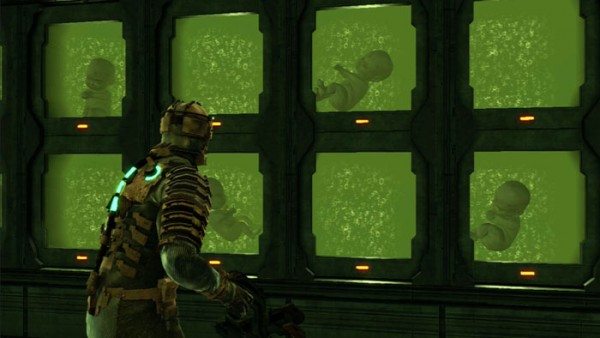 The game is split into twelve chapters, each about an hour long. Furthermore most of these, despite often simply boiling down to errand missions, do succeed in feeling sufficiently varied. Each chapter, at its most basic, essentially consists of moving through a series of rooms, while fending off the hordes of monsters that attack. However, a number of novel ideas prevent Dead Space from feeling entirely mindless. Zero-G sections are a noticeable highlight, often involving the solving of a large-scale puzzle in a weightless environment. Just as memorable are the areas in which Isaac exits the ship’s atmosphere and must survive without oxygen. Furthermore, such puzzling often revolves around either Isaac’s ability to slow the motion of objects, or the use of his ‘stasis’ module (essentially a shameless lift of the fashionable at the time Half Life 2 gravity gun). That said, ascertaining where the next onslaught of enemies will spew from, and then successfully dispatching them, forms the bulk of the game’s running time.

Even though violence is commonplace, gore is generally utilized to restrained effect, although the occasional prolonged sequence of Issac being (quite literally) ripped apart at the hands of various alien abominations does raise an eyebrow. Aside from being deeply boring, such a lacklustre impersonation of Resident Evil 4’s hilarious chainsaw decapitations completely misses the point. Whereas Capcom’s homage to the B-movie had its tongue firmly welded to its cheek, the violence depicted in the angst-ridden Dead Space simply comes across as immature, frequently serving to undermine the tense atmosphere it is so meticulous in building. Ominous moans from the vent above the player’s head, a door elsewhere in the ship slamming, strange shadows flickering on the ceiling; all these serve to create a sense of dread, not a badly rendered alien slug spraying ketchup up the walls. Thankfully, there is a general reluctance to indulge in such cartoon violence, meaning that the tense atmosphere is often only heightened by these rare outbursts of frenzied ferocity. 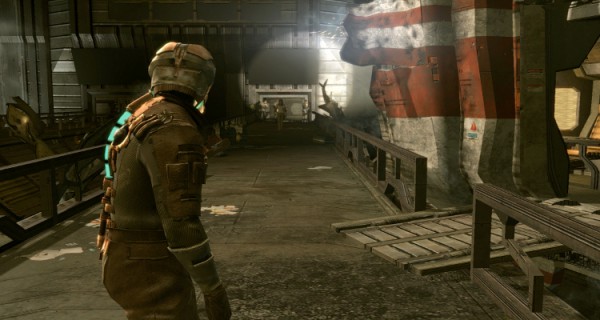 Ultimately Dead Space proves itself a entertaining, if painfully derivative, induction of what would prove to be a major new franchise for EA. Although the strong, polished visuals successfully mask for the most part limited gameplay ambitions, it is the perfectly timed length of the main storyline that mostly manages to ensure matters avoid repetition. This is not to downplay the role played by a series of memorable set pieces, nor indeed the pervasive sense of dread, either. Essentially, Dead Space is more than the sum of its parts, and with a next generation installment in the franchise still trapped in a developmental black hole, now remains as good a time as any to remind yourself where it all began.