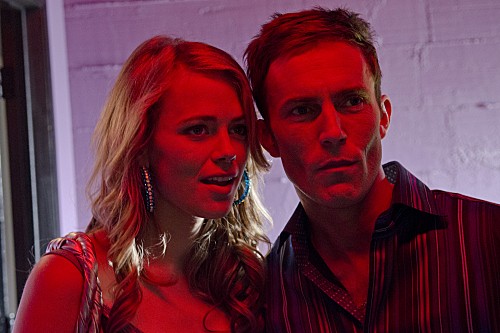 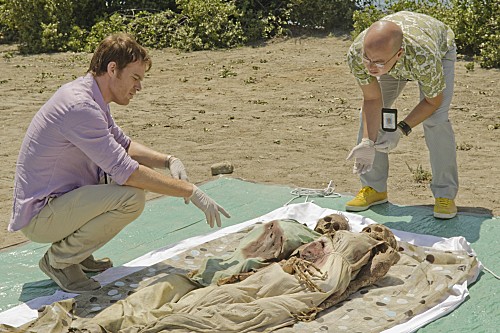 While tactical thinking may have ensured Dex briefly escapes an inevitable checkmate, three other characters unwittingly either move further into a likely ambush or are about to become more than simple pawns to the plot. It would seem that densely layered season seven of Dexter is slowly evolving into a tense, claustrophobic chess game. Cue butts on seats as somebody is sure to fall.

Having been distracted by other issues, “Swim Deep” finally sees Isaak go after Dexter wholesale, stalking him rather than charging in. This means that Dex has to resort to some ingenious methods to keep his hide intact, including one humorous trick reminiscent of a long con from season three and a highly intelligent bait and trap foreshadowed nicely in advance. As much as we’re seeing just how deadly an adversary our new villain is, it’s also a delight to witness the protagonist putting his lizard brain to such good use. Things for a while had all been a little too convenient for Miami’s most successful mass murderer. 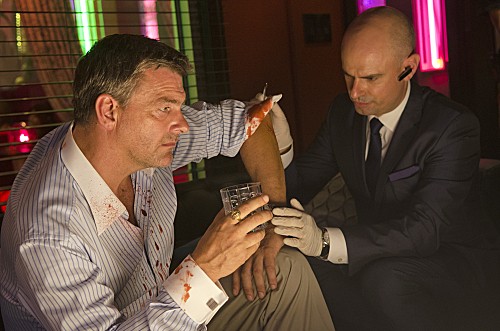 Following the strand of greater conflict, Deb is no longer just sitting on the revelations about her brother; she has to take an active role with that knowledge. Despite being loathe to Dexter’s dark needs, she almost without thought sets about making sure he isn’t caught out, foiling LaGuerta’s efforts during an interview with the son of a Dex victim and then shooting down Batista’s attempts to reopen the Mike Anderson case. Like it or not, she is no very much onside with Dex and is covering her own ass as much as his; from reluctant confidante to accessory after the fact, and now perverting the course of justice. The only question left is just how far she’ll go.

A touchstone of the show’s overhaul in writing quality has been its ability to thread past and present into a seamless flow of action and various references to the show’s history help set the stage. Initial doubts over Doakes’ guilt as the BHB, both from LaGuerta and Lundy, provide the nucleus for a second look, Dexter’s reticent brotherly influence on Deb creates symbolism and background providing the episode’s title, and Quinn’s shady misdemeanors over the years make him the subject of attention for Jason Gedrick’s nightclub manager George.

Similarly, the Wayne Randall subplot has birthed a love interest scenario in-keeping with the show’s new-found novel like structure. Chuck star Yvonne Strahovski continues to impress as Hannah McKay, a character more interesting by the second, a role which could go one of several possible ways. It’s easy to see Dexter’s fascination and attraction with the very non-innocent femme fatale and to understand it as he protects her from being implicated in one her ex-boyfriend’s murders but holds no punches in confronting her with the evidence. It’s a compelling dynamic and there’s clear chemistry between Dex and, essentially, the ‘anti-Rita’.

While the inner monologue is still a little patchy, though improving with each episode, the scripting is otherwise marvelous, both in its mature plotting and some impeccable and memorable dialogue. The interactions between Dexter and Isaak in particular hit all the right notes, especially when they finally come face to face, while a conversation between Deb and LaGuerta about the late great James Doakes is a master of understatement and canonical continuity. Harry Morgan finally reappears, albeit for only one unresolved and disposable scene which is none the less brilliantly written.

Most importantly, subtext and subtle hints are pushing towards the feeling that somebody is about to fall foul of the storytelling gears. Currently, LaGuerta risks facing an nonviable collision with Dexter, Quinn is set to clash heads with the Koshkas, and Dexter is up against a man described as ‘the terminator’ in the aftermath of one of his crimes. These matters will not go quietly into the Miami night under the influence of MD-99, they will have to be thrashed out in the open. There will be blood.

And so next week the multi-story chess game continues, throttle slowly being released as the danger grows and the pieces pile up. When the storytelling is this good, the scripting so tight, Dexter’s latest can be put up next to anything else on TV and makes for unmissable viewing. Stay tuned for the next turn.