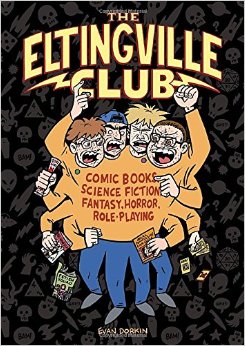 Face it, nerds, dorks, geeks, or whatever they’re supposed to be calling themselves these days can be really annoying. From the guy in front of me at C2E2 who made poor comics artist Doug Mahnke (Green Lantern, Final Crisis) sign his entire ouevre from The Mask to a variant cover that just came out the day before to another guy who calls my work every week asking about action figures we don’t have, making death threats towards Ben Affleck if he doesn’t do a good job as Batman, and never even putting a toy on hold. (He even spent twenty minutes trying to convince me that Bard from The Hobbit is Aragorn’s father even though Aragorn is Numenorean, and Bard is from Dale. Or saying someone from Chicago is British.) And I’ve had my share of annoying moments as a nerd, like tweeting complaints directly at my local CW affiliate when The Flash and iZombie are pre-empted for Virginia Tech basketball games. However, writer/artist Evan Dorkin takes the idea of the “annoying nerd”, “Comic Book Guy”, and gatekeepers of fandom and turns it up to eleven in his blackly hilarious, occasionally self-deprecating, and scathing Eltingville Club stories published between 1994 and 2015 in a variety of anthologies and now collected in one handy volume courtesy of Dark Horse Comics.

First, Eltingville Club is best read in small doses instead of one long binge read like yours truly did for your review. The nauseatingly high level of unnecessary pop culture references, sexist and homophobic comments from the club members, and their sheer obtuseness physically forced me to take a break from comics, video games, and superhero TV shows to binge watch Gilmore Girls. This is actually a triumph on Evan Dorkin’s part as he visually and through his dialogue makes Bill, Pete, Josh, and Jerry distinct and memorable characters that “develop” throughout the decades of strips in the hardcover. 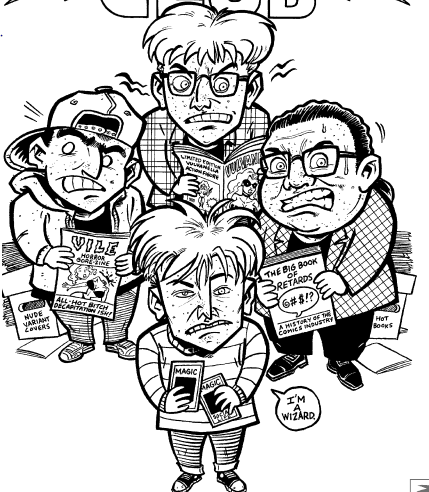 Bill Dickey makes Sheldon Cooper look like Mahatma Gandhi. He is the president of the Eltingville Comic Book, Science Fiction, Fantasy, Horror, and Roleplaying Club and probably the most annoying character of the bunch. He is a completely evil jackass with a Napoleon complex, who seeks to lord over everyone around him with his knowledge of comic books and geek culture. In the early stories, he makes homophobic comments about Interview with a Vampire, challenges Josh to a trivia duel for a Boba Fett action figure that ends up getting decapitated, and only sees women as sex objects as evidence by his sick fantasies of superhero and Star Trek cosplayers attended to his every whim. And he gets worse as the story goes on burning down Joe’s Comics Store and basically finding work as “comics nerd maid” as he organizes wealthy people’s comics and memorabilia collections so he can read their comics and steal their stuff. By the time the final Eltingville Club story rolls around, he confronts Jerry for bringing his girlfriend to a “club reunion” and then goes on a diatribe about “fake geek girls”.  When he’s not around, the other members basically say he’s the worst. Thankfully, Dorkin gives readers a truly cathartic moment for readers who have had to put up with Bill’s crap for a couple hundred pages by having him reach highest hubris by saying that there is a Firefly reunion and get trampled on by all of San Diego Comic Con. He gets a profoundly sad line of dialogue where he mourns not having a complete Silver Age run of Green Lantern and also being a virgin with his penis “still mint in package”. Bill is the embodiment of the Internet comments section and even gets called out on his horrible, sexist comments by Pete, who is the horror geek of the group, works for a horror porn company, and sees women as “receptacles”. 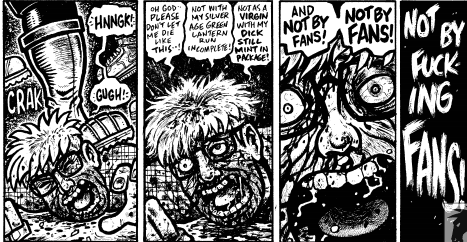 The other Eltingville Club members are Josh, who gets angry a lot because the other club members make fun of his weight and the fact that he is chronically unable to complete a collection. He is the butt of a lot of Dorkin’s dark visual gags like his zombie makeup making his mom have a heart attack, the fact that he gets apprehended by security guards for opening 42 packages of Wonder Bread and still doesn’t get the Two-Face trading card from Batman Forever, or goes to every fast food restaurant in the city while only ending up with an Apollo 13 collectible cup. (Yeah, this comic is pretty insane.) But comics and sci-fi genuinely make him happy as seen by his whooping when the Club begins their 32 hour Twilight Zone and a very mid-1990s line of dialogue about how it is a perfect time to be a nerd with comic book films like Dredd, The Mask 2, Tank Girl, Spider-Man, and Batman Forever coming soon.

As mentioned earlier, Pete is the horror fan of the group and is obsessed with special effects makeup and Christopher Lee. He is also a mega-gatekeeper and disrupts a Zombie Walk after he “wins” an argument with a fast zombie fan by naming horror film subgenres. Jerry is definitely the most decent member of the club if a little socially awkward with his repetitive use of quote from various sci-fi movies, and he ends up becoming a professional Magic the Gathering player and actually having a girlfriend. He even tried to get a female member into the Eltingville Club, but was voted down by Bill. Jerry fades in the background of most of the stories except the final one, but for good reason because he’s a decent human being, who actually grows up and is passionate about his interest without demeaning other people. 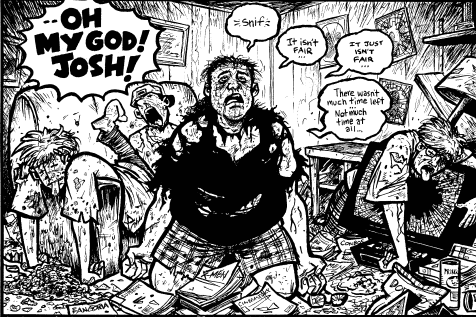 And Dorkin puts these larger than life nadirs of fandom into some downright wacky plots where his art style shifts from Mad style humor cartooning to surreal horror during the “Marathon Men” story where the Club tries to stay awake during a whole 32 hour Sci-Fi Channel Twilight Zone marathon using caffeine pills and eventually Josh’s mom’s heart meds. His Eltingville Club stories are dense with pop culture references from comics to kaiju movies and obviously Star Wars and Star Trek references. Dorkin’s own fandom shines through even as he takes shots at other obsessive fans. But even though they’re text heavy, reading Eltingville Club isn’t a slog with Dorkin’s almost caricature style art as you can almost smell the spit coming out of Josh’s mouth as he argues with Bill over some trivial aspect of fandom, or the rain mixed with sweat as Bill enters Joe’s Comics, which should be the opposite of what good comics aspire to. Dorkin puts in a lot of background gags in the characters’ rooms and various toy and comics stores, like a beleagured The Dark Knight Strikes Again poster hanging up in Joe’s. These and some genuinely clever pop culture references (There are some supremely hilarious Alex Ross jokes in the “As Seen On TV” story where Bill and Josh call into a QVC-type show selling comic book memorabilia and correct the host until he loses his sanity on air.) definitely reward a close read.

My personal favorite of The Eltingville Club collection was “Marathon Men” as the combination of junk food, caffeine, sleep deprivation, and the usual interpersonal squabbles is relatable to anyone who has pulled off any kind of “marathon” from a 12 hour Lord of the Rings Extended Edition watch-through to binge reading Matt Fraction’s Invincible Iron Man run before Iron Man 3 came out or watching a full season of Buffy the Vampire Slayer in a day. (Season One doesn’t count, noobs!) Also, Dorkin shows some classic horror comics chops worth of the great black and white EC Comics tradition with the Eltingville Club transforming into slavering monsters as the night goes on, and the strict grid format gets shattered. He does a similar send-up of the superhero genre in Eltingville Club #1 as Bill and Pete do battle with Thor’s hammer and Captain America’s shield in the ruins of Joe’s Comics and prove themselves unworthy of these great heroes. Dorkin uses a lot of heavy black inks and makes his characters literally uglier as the stories progress. This hardcover edition also has some background information about the real life incidents that inspired some of Dorkin’s Eltingville Club stories (There is an actual comic book store that had a kiddie pool on the roof to prevent leaks.) and a story featuring the indie/small press version of Eltingville Club called The Northwest Comix Collective that will piss off avid readers of The Comics Journal.

Every person, who starts a flame war, harasses a female fan of comics or sci-fi, leaves death threats for creators or actors, or is just a card carrying member of Gamer Gate should read The Eltingville Club. The effect of them reading the stories of Bill, Josh, Jerry, and Pete taking their nerdy interests too seriously and the insanity that ensues would be like King Claudius watching a play reenacting his murder of Hamlet’s father in Hamlet. Or hell, they might consider the Club as their new favorite superhero team.

Evan Dorkin’s Eltingville Club holds up a mirror to the dark side of fandom and doesn’t flinch. It’s basically a guide on how not to be a good fan of comics, sci-fi, fantasy, horror, and gaming written by an actual fan with plenty of geeky references and an old school humor meets underground art style. Act the opposite of Bill Dickey, and you will be golden. Because, hey, comics are fun, especially when reality sucks.