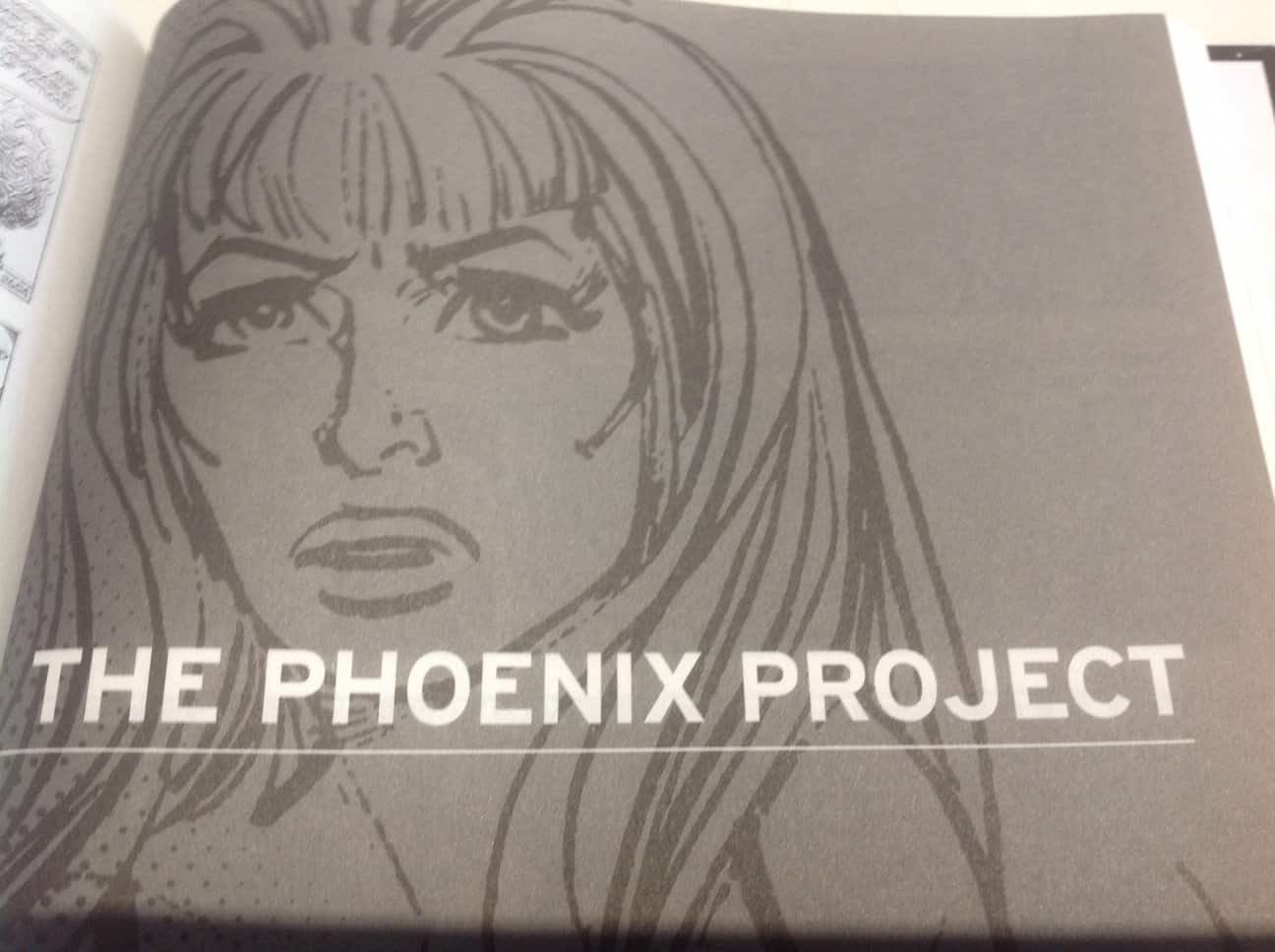 At H.M. Defence Research, a world leading defence organization located in England, Dr. Hendrix Baar, at the invitation of H.M.’s head Tom Thorp, is about to perform a test on a new combat suit baptized the Phoenix Project, a state of the art military uniform that protects from bullets and grenades and emanates great heat in the process. However, Thorp’s brainwashed personal secretary Margo Arden allows an uninvited guest in, the latter sabotaging the event, killing Dr. Baar and destroying the highly coveted suit in the process. When Margo is found dead by poison shortly thereafter, MI6 sends James Bond 007 to investigate the unfortunate incident, starting with a nasty game of blackmail with his first lead, a tourist guide Margo had met some time ago in Istanbul that may have played in a role in a sequence of events that led to Margo being brainwashed. But brainwashed for whom, and why?

The predominant struggle that any writer or filmmaker faces when tasked with delivering a new James Bond story is how to keep the proceedings fresh. If there is one major property where the most obvious criticism of boredom through repetition can be laid on, it is most certainly Bond. Performing the tightrope walk between tinkering with the formula whilst adhering to the blueprint is far easier said than done. Sometimes the gamble pays off, other times less so. The Phoenix Project is an example in which the creative juices simply aren’t flowing as fluidly as they normally do for its artists. On the flip side, it is hard to put too much blame on Jim Lawrence and Yaroslav Horak. After all, they collaborated on a plethora of 007 comic strip adventures over the course of several years, knocking out stories one after the other at blistering speed. To expect double-oh perfection each and every time would be foolhardy and place unwarranted pressure on each new comic.

All that being said, fair is fair, and it is fair to argue that this latest endeavour is not quite up to par with the duo’s previous offerings. Among its stronger elements are the opening, Bond’s infiltration of the chief antagonist Kazim’s organization and a clever use of the titular battle armour in the story’s climax, although even that aspect comes tinged with some disappointment, but more on that later. The aforementioned starting sequence is a soft callback to From Russia With Love, both the book and the film, by which 007 does not appear at all for an extended period of time. While this technique is rarely borrowed in the grander scheme of Bond stories, it is a highly effective one. Much like with From Russia, the first 5-10 pages of The Phoenix Project (keep in mind that the comic strips run about 30 pages, so 10 pages without the protagonist is a good chunk of the story) are all set-up to inform the readers about the type of danger Bond is about to set foot in, and in the process awards the villains with the spotlight to shine and display their nefariousness. 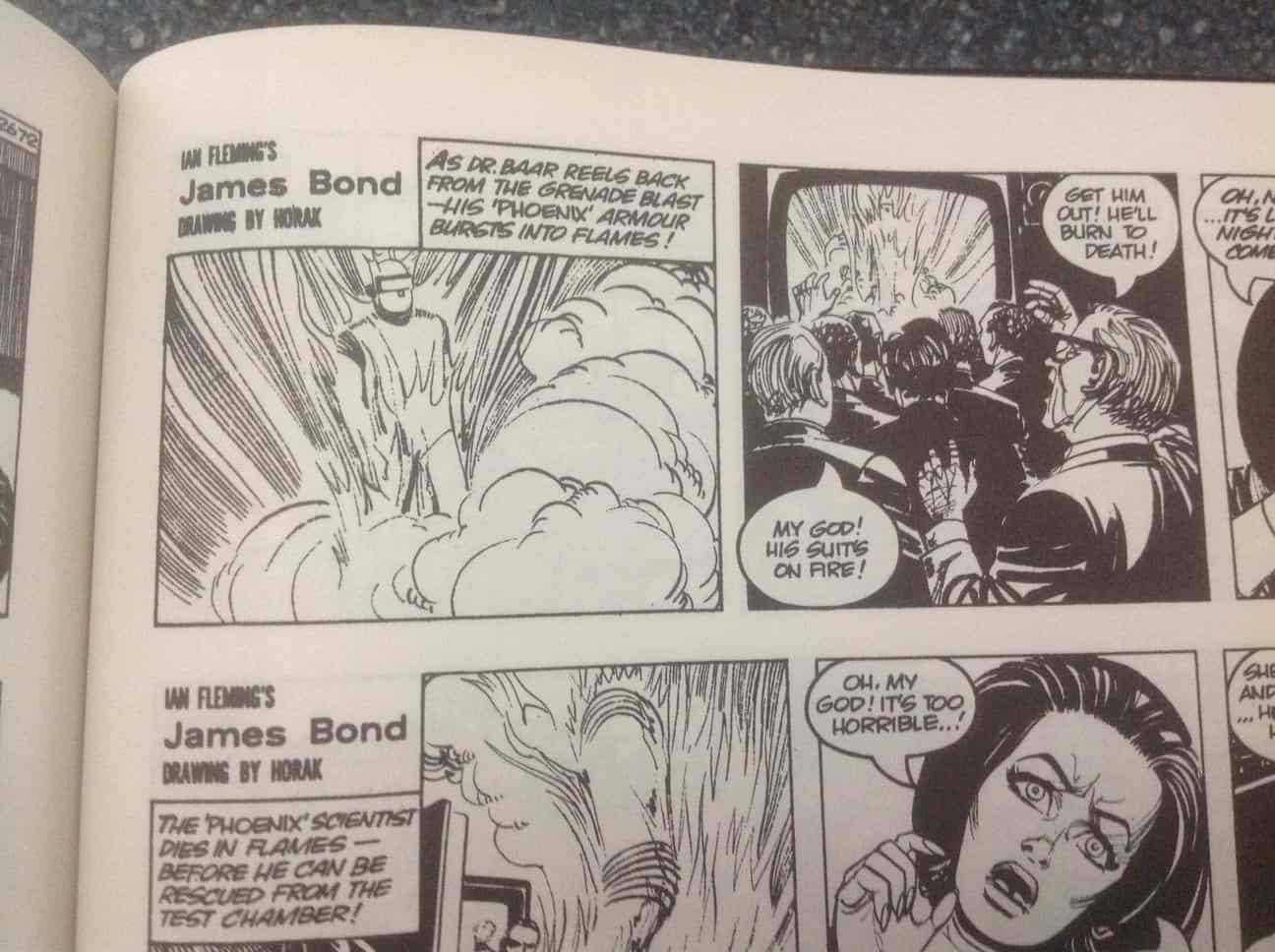 Later on, 007 succeeds in playing Kazim for the fool by posing as a private contractor willing to work for the criminal mastermind within his personal counter-intelligence spy ring. This is also a regularly effective ploy to get Bond to approach his ultimate target and injects the yarn with some tension, the dominant question on the reader’s lips being when will the baddie discover that our hero has been lying and turn the tables on him? Finally, the much sought-after Phoenix suit, of which Kazim has made a second version for himself, makes itself useful at long last when Bond and his two new allies, Texan couple Jenny Starbuck and Jack Donner (who are targeting Kazim on a personal vendetta), escape Kazim’s burning estate by actually using the damage repellent, heat protective body armour.

The downside to this plot point is that, apart from the failed demonstration at the start of the book and the climactic escape from a fiery doom, the Phoenix project is never used! It literally just sits in a chamber at Kazim’s estate for the duration of the adventure. It begs the question: why have a villainous head of a counter-intelligence and assassination group steal plans to the super-suit and not make any use of it whatsoever during the story? How amazing would it have been if Kazim or any of his right hand men had adorned the outfit and hunted down 007, ending in a brutal one-on-one battle? Writer Lawrence opts out of that potentiality in preference of decent is unspectacular action beats that have been seen before, including in some very recent stories he himself penned. 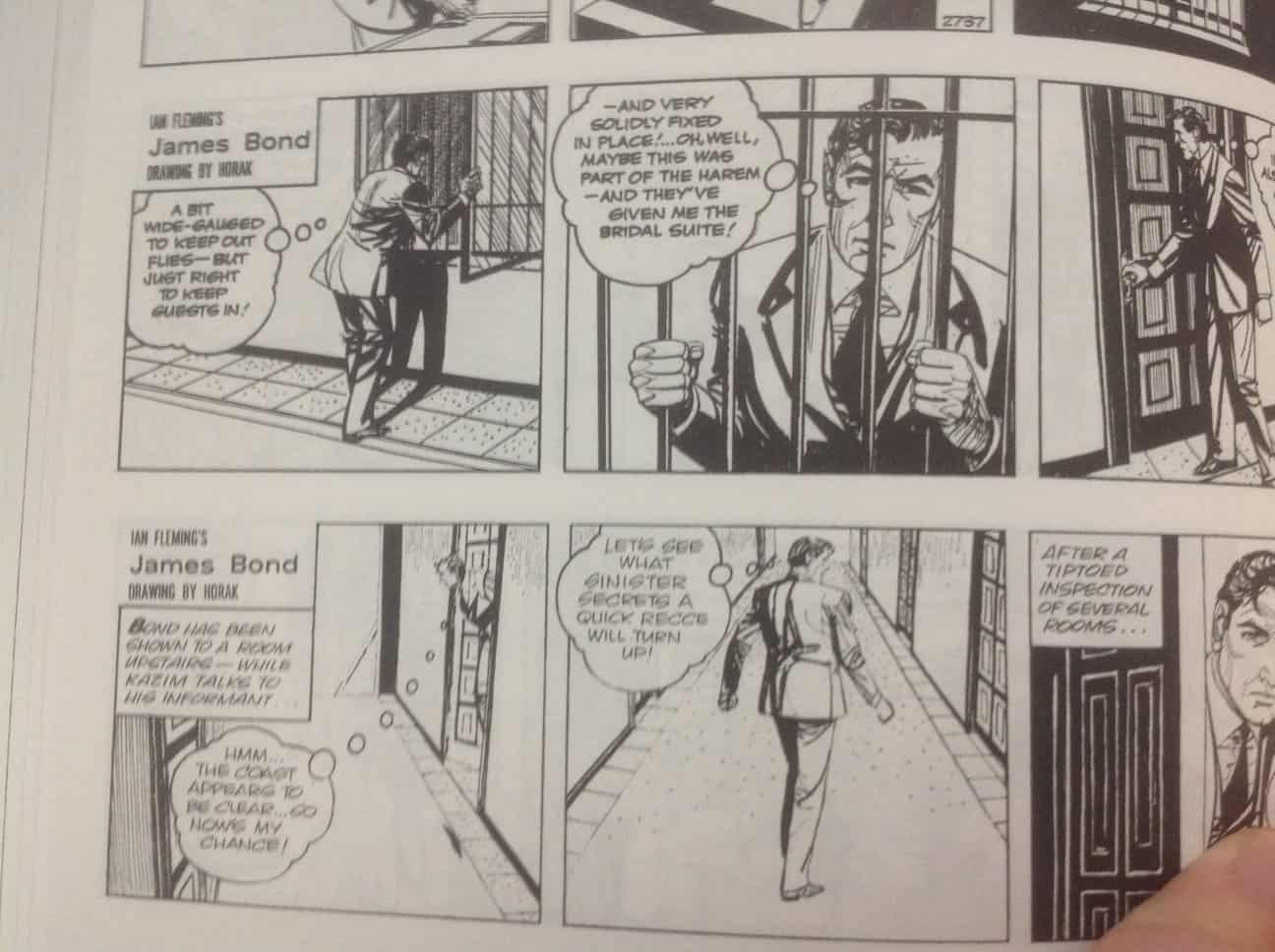 Another curious decision is the utter lack of a definitive Bond girl. An Istanbul-stationed agent by the name of Afford makes fleeting appearances and embraces Bond in the final panels, but her participation in the plot is so irregular that the sexual escapade at the end feels unearned. For a moment one might begin to believe that Jenny Starbuck will end up being 007’s staunch female ally, but the story makes it very clear that she and Jack Donner are a strong couple, to say nothing that her character is reduced to Stacey Sutton A View to a Kill, ‘damsel in distress’ level of ineptitude. There is a case to be made about jiggering with the 007 ingredients to freshen things up, but not having a proper Bond girl is not one of them. Part of the fun is seeing how the protagonist and his female companion will gel together, what her skill set is, how she compliments his skill set and, in the most fruitful scenarios, how she can ensure that he stays alive. Bond doesn’t bed Camille Montes in Quantum of Solace, yet there is no question the latter nevertheless fulfills most of the Bond girl duties. Not having a Bond girl at all leaves a gaping hole.

What’s more, Kazim’s plot to get his hands on the Phoenix Project involves brainwashing a woman, a plot point readers went through only a few stories ago in The Isle of Condors. In essence, The Phoenix Project is hampered by badly missed opportunities (lack of involvement of the titular armour), the absence of an extremely important ingredient (a Bond girl), obvious repetition (a brainwashing scheme) and a handful of action scenes that, while serviceable, are not on par with what has come before from Jim Lawrence and Yaroslav Horak. As Sam Smith sings, Bond never shoots to miss and neither do those that make up his stories, only that sometimes even the best can have an off day. Perhaps after a stay at the Shrublands clinic, the comic strip’s two double-ohs will pick themselves up again.

James Bond will return in The Black Ruby Caper.