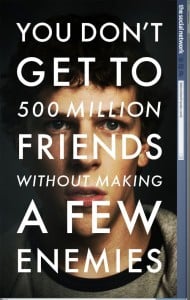 Privileged due to his intelligence and in spite of his personality, Mark Zuckerberg’s (Jesse Eiseinberg) need for success runs far deeper than his need for money or acceptance. His primary drive initially seems to be to become a member of a Harvard Club, but shortly after that opportunity is offered to him, he has bigger things in mind. His compulsion to be “cool” is ultimately at the expense of all and any intimate relationships, something ironic for a man with “500 million friends”.

The comparisons to Citizen Kane and other similar “rise to the top” filmic narratives are not entirely unwarranted, at least on a thematic level Fincher’s film seems to be a natural progression of their ideas brought into the computer age. How the film departs from these original models is most revealing of a contemporary relationship and perception of success. In many ways, few things have changed. We still understand, or more accurately “value” the idea that money cannot buy happiness. Similarly, we enjoy watching industry giants fall; it is strangely cathartic to watch those who are better off or somehow more successful “equalized”. Not that Zuckerberg really falls, Facebook is more successful than ever, but some kind of moral reckoning already seems to have been passed on his success. It is how we so keenly forgo personal responsibility and freedoms to corporate powers that has completely changed the landscape of contemporary success stories. This is not only true for a millions of people registered with Facebook, but for Zuckerberg himself. Ultimately, the film is an exciting look at the darker side of a “nerd” age. In the film’s opening scene, Erika (Zuckerberg’s girlfriend at the time) breaks up with him because he is an asshole, not (despite what he may think) because he’s a nerd. This enraged comment seems to echo through the whole piece, and certainly haunts Zuckerberg. In fact, cinematically, it’s the moment that drives him towards creating Facebook.

Up against Zuckerberg are the financially, culturally and physically spoiled Winklevoss twins. Typical villains in a computer aged narrative; they are not so easily classified within Fincher’s narrative. Though they claim that Zuckerberg stole their idea, from the onset, it is quite clear that they are very much out of their league. Ultimately simple minded, they are not the piece’s villains.

One of the film’s best juxtapositions begins with a trite and overbearingly coy conversation between Zuckerberg and Sean Parker (Justin Timberlake), which transitions into a rowing tournament featuring the Winklevoss twins. Aside from being the most visually complex sequence of the film, the rowing scene suggests the inherent inequality in business and finance. This is especially apparent if one is to compare Sean Parker’s methods and ideology with that of the twins. How things “aren’t fair”, and even in a world where fairness reigns (if such a world exists), justice is an ultimately fruitless pursuit dominated by compromise and exaggeration. If hard and good work was ever treasured as a social value, it no longer is in our contemporary world.

The most interesting facet of the film however, is how Zuckerberg rejects an entire system only to create one that is as problematic. He was offered what we can only assume are millions for an MP3 application which he made available for free, and similarly refused advertisers on Facebook because it would compromise it’s “cool factor”. Though this turned to be a keen business move, it is also revelatory of a man bent on creating a new world with himself as king. Comparisons with Citizen Kane have been thrown around copiously already, and thematically, it is not unsound. Kane wanted to build himself through his Media Empire, something that for Zuckerberg is false and deceiving, while Zuckerberg creates a new media with infinite possibilities that is intentionally or not, simply a reflection of his own dangerous pathology.

The Social Network is not without its problems. Certain passages of dialogue are a bit too “precious” and ring untrue. This is not too distracting, but it certainly detracts from the film’s overall effect. The ending as well is problematic, though it is also rendered palatable by its compulsiveness, which somehow softens how obvious and trite it may appear to be. The performances are very rich, as is the writing, but it is Fincher’s filmmaking which raises this film to a higher plateau. Though not overtly showy, it is visually and thematically nuanced in a way that few working directors’ could ever hope to be. Fincher demonstrates that he is one of the most compelling forces in the contemporary film scene and why each of his projects are worth the anticipation they so often garner.