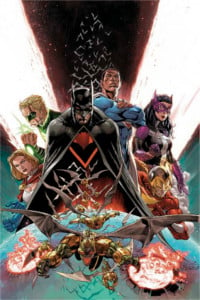 Earth 2: World’s End is a series that has a lot to do. On top of keeping the rigorous pace that a weekly series must keep, it has to serve as a direct tie in to a single series, unlike DC Comics’ other weeklies Batman Eternal, which ties into multiple books, and Futures End, which is chronologically separate from the rest of the DC Universe. World’s End has to keep up with the story within the pages of Earth 2 while telling its own tale though if any series needed its own weekly it’s this one. Earth 2 has before struggled under the weight of its numerous characters often leaving some to the sides to advance the plot. This issue is written by Supergirl writer Mike Johnson, relative newcomer Marguerite Bennett, and novelist Daniel H. Wilson, making a mostly untested but interesting team. Bennett is also now co-writing Earth 2, which smooths over the continuity between books.

Despite all the pressure, Earth 2: World’s End #1 serves as a brilliant introduction to Earth 2, spending an albeit lengthy twenty pages summarizing the last two years of story along with its massive world and cast of characters. While it is heavy on exposition, this first issue does a fantastic job at not only explaining the story thus far, but tying in plots and characters either ditched after James Robinson’s previous run or introduced during current writer Tom Taylor’s run. It seamlessly brings old and new characters into the fold without ever feeling excessive.

Once all the exposition is finished, World’s End jumps right into the fray. It shows heroes all over the globe working together to restore the world after the events of Earth 2’s last issue, and opening up new plot lines for its mighty cast. While a few heroes are still left out, almost all are covered. The Flash restores global communications, Hawkgirl deals with a cryptic Doctor Fate, Mister Miracle battles within a mental prison, and the hunt for the  villain Bedlam begins. As World’s End successfully wraps up Earth 2’s backstory, it also leads into a new arc with new villains. If there’s ever a time to get into Earth 2, it’s now.