In a Q&A with Vanity Fair, Edgar Wright revealed his plans for his next film Ant-Man. Wright went on to say that it would be “essentially a high-tech spy heist film with somebody with a very particular power.” Wright added that while “shrinking man films generally get a bad rap, Ant-Man will twist the genre a little bit”. “I know there’s a big stigma attached to it, mostly because every movie about shrinking has been about people in peril. I think it’d be great to do a shrinking film about a bad-ass secret agent.” “It’s true that the character is not considered one of the Marvel brand leaders and that is precisely what excites me about it. I want to make a film inside the Marvel universe that is something a little different; a genre film within the superhero genre so to speak.” 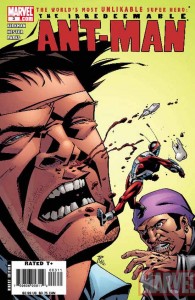 Personally I am really excited about this project considering Hank Pym aka Ant-Man is one of my favorite super heroes in the Marvel Universe. Created by Stan Lee and Jack Kirby, Ant-Man first appeared in Tales to Astonish #35. After discovering a size-altering chemical substance, biophysicist and nanotechnology expert Dr. Henry Hank Pym decided to become a superhero. Armed with a helmet that could control ants, Pym would shrink down to the size of an insect to become the unconventionally heroic Ant-Man. He soon shared his discovery with his girlfriend, Janet Van Dyne, who became his crime-fighting partner as the Wasp. The duo would become founding members of the Avengers, and found recurring enemies in the villainous Egghead and Pym’s own robotic creation, Ultron.

Earlier this year Edgar Wright told MTV News, “Because that character isn’t one of their biggest properties, it’s not like a tentpole deadline. It’s more like me and Kevin Feige saying, ‘Let’s make a really good script.’ We’ve always agreed on that — ‘Lets make a good script that works, that’s all about a great genre film, and that isn’t necessarily relying on anything else.

It was rumored that Nathan Fillion and Eva Longoria were up for the roles of Ant-Man and Wasp. At the San Diego Comic Con in 2010, Wright confirmed that his script is a origin story, and that doesn’t work for Marvel’s chronology to include Ant-Man in The Avengers.