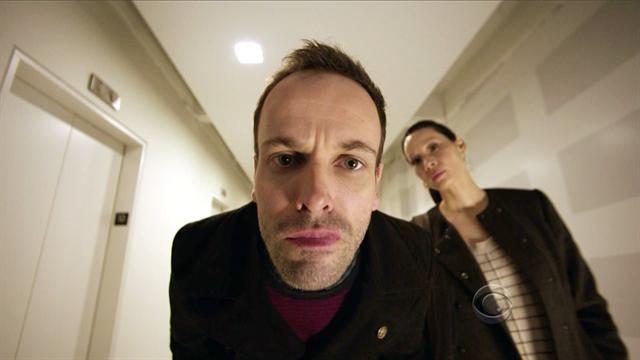 Our hero and his sidekick trying to access a seemingly secret facility. He waves a bag, containing the remains of a surveillance bug in front of the entry camera, with a big boyish grin across his face. With this simple action, they are immediately granted entry.  In these few seconds, you can tell Elementary is back on our screens.

We see the aftermath of Holmes’ dalliance with Sebastian Moran from the previous episode, as Holmes is suspended from crime consulting by Captain Gregson.  Therefore he has been reduced to working in an unofficial capacity while investigating the murder of a conspiracy theorist. It may seem unorthodox for Holmes to essentially go looking for crimes to solve, but this only feeds his stubborn and egotistical demeanour. When talking to Watson about the consequences of his actions against Moran, he makes it clear that he knows how important he is to the NYPD and he is not willing to let a case go just because of professional differences with Gregson.

In retrospect, there is more of the Captain and even Detective Bell in “The Red Team” when compared to earlier episodes, indicating that the relationship in the spotlight this week is not between Holmes and Watson, but between him and Gregson. The events of the previous episode obviously taking its toll, it has changed the dynamics of their perceived mutual trust so that Gregson’s long-standing faith has been shattered. The importance of their friendship, however, is evident to Holmes when he agrees to meet Gregson in a bar – figuratively taking him up on the offer of a drink that he had refused earlier in the season.

Watson however is not excluded from all the fun; though not as involved in the case, we see her decision to stay with Sherlock as an official sober companion come under fire from her therapist. Even though Watson doesn’t seem to mind that she is essentially working for free, the question arises of whether her choice will result in Holmes’ relapse. It is obvious that Holmes thinks highly of her (his introduction: “This is Joan Watson. She stops me from doing heroin.”) so the repercussions of this decision are highly anticipated in future episodes.

The storyline itself weaves through intrigue and numerous twists as the basic whodunnit evolves into something more than just personal gain. The idea of ‘War Games’ and the significance of the aptly-named ‘Red’ and ‘Blue’ teams are curious enough to keep us guessing, but thanks to Government intervention, the plot leaves us wanting more. By the time the episode reaches its conclusion, we are still left wondering. As a result, the writers effectively create a murder mystery with a solid backbone – making this week’s episode incredibly engaging.