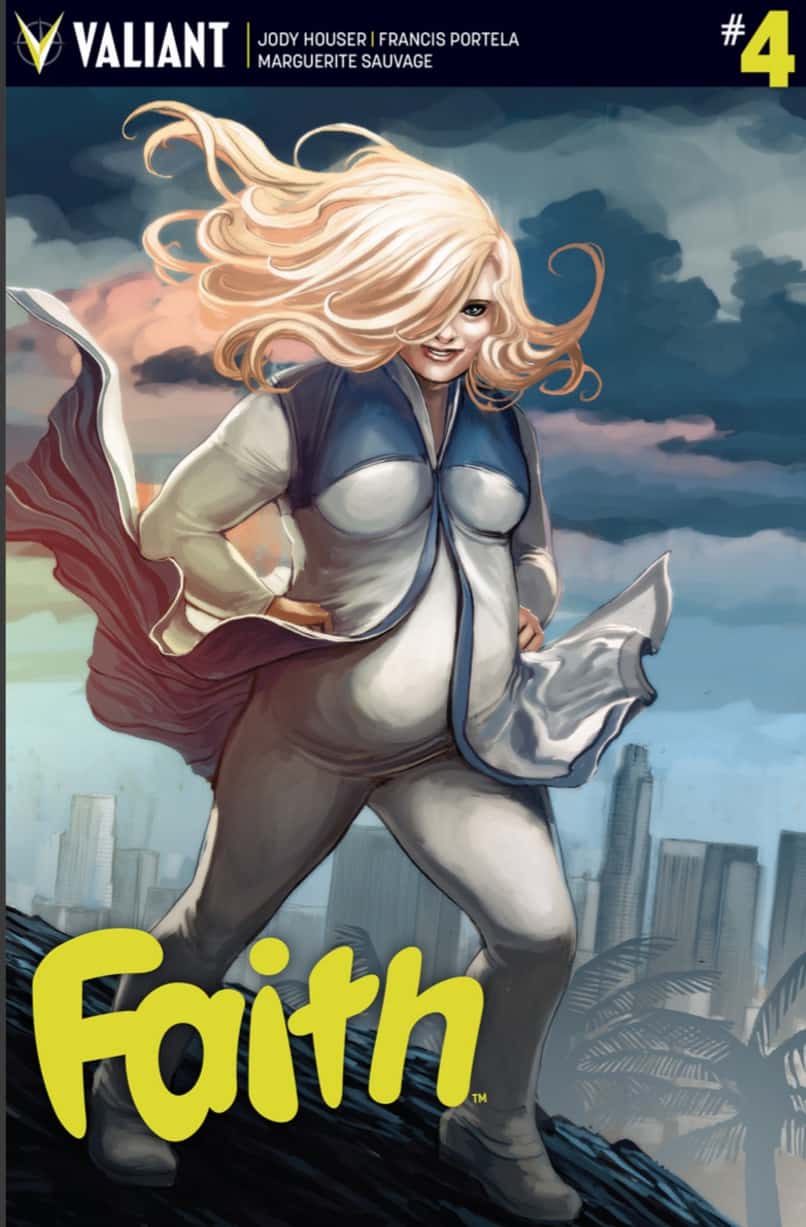 This is the final issue of the Faith miniseries, but have no fear! Our valiant and nerdy superheroine just got promoted to an ongoing series that’s coming out this summer! Even if it wasn’t though, this final issue gives enough closure and a happy ending to this part of Faith’s story.

The issue picks up where issue 3 left off, which is good because the previous issue felt like it left off in a weird place, so the explanation of who the Vine are is exceptionally handy. With Torque in their possession, it’s up to Faith, @X, Archer and TV star/alien Hadley Scott to save him and the rest of the Psiots who have been kidnapped over the course of the series.

The introduction of the Vine as the antagonists in the previous issue felt like a shoehorn villain in the previous issue since ‘aliens did it’ tends to be the superhero comics way of writing themselves out of corners, but this issue lets the plot turf out beautifully, with the extra twist of the Plantlings being a high powered Hollywood death cult actually making the ‘aliens did it’ excuse actually interesting.

Portela’s art is solid as usual, except for the one instance of him drawing a full moon when the dialogue says it’s nearly a new moon outside, but it’s an easy forgive with the way Dalhouse and Pantazis color the scene to reflect moonlight. The sequences by Sauvage are once again a delight though. With mixing up the sequences to be a scene from the fictional TV series “Night Shifters” and a flashback to Faith’s childhood along with the usual scenes in Faith’s head, Sauvage spectacularly does her job of breaking up the current reality of the series with the fantasy (and sometimes painful memories) of Faith’s inner world.

Still, fantasy doesn’t always match up with reality and while this story does get a happy ending, some parts of Faith’s reality don’t end so happily or just keep going. Such is the way of life though and it’s refreshing to see Houser give this part such good closure while still not shying away from the realities of Faith’s world. It doesn’t make it all bad. Sometimes, happiness is just as easy as a coworker inviting you over for RPGs.

This particular issue is titled “Herstory” and it feels befitting. Faith is history in the making and while this part of her story is over, Houser, Portela and Sauvage did a fantastic job in creating the first chapter of it. #4 proved to be a solid finale, closing enough to wrap it all up, but leaving enough avenues to explore in the upcoming ongoing. Just what awaits her there, we don’t know, but if it’s just as fun of a trip as this story has been, there’s nothing to worry about.