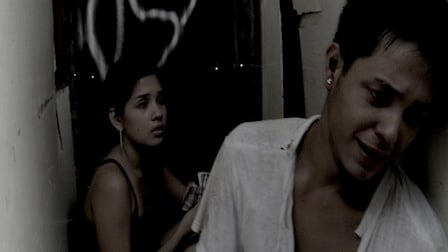 It’s never a good sign when even non-fans of a given genre can spot the clichés pervading a particular piece. Whether you own a collection of imported martial arts movies, or you wouldn’t even see Crouching Tiger, Hidden Dragon despite its Oscar nominations, it’s hard to imagine any viewer identifying anything in the Vietnamese film Clash that resembles imagination, suspense, or even fun. Not even some impressively choreographed fight scenes can save the film from being too long at a flimsy 90 minutes.

So unoriginal is the storyline surrounding the kung-fu mayhem, one wonders if it wouldn’t be better appreciated as the tacked-on “plot” of a video game rather than an actual screenplay. Devices from countless other movies (martial arts-related or not) seem to turn up in every frame: The beautiful but deadly femme fatale, the professional rivals who can’t help falling for each other, the parade of characters walking in slow-motion unison while clad in aviator sunglasses, evil overlords uttering philosophical diatribes that wouldn’t even hold up in a undergrad conference, etc.

If director Le Thanh Son had any sense of tongue-in-cheek homage, then the film’s melting pot of clichés could’ve come across as escapist or so-cheesy-it’s-good fun. Unfortunately, the story of Trinh (Veronica Ngo), a mercenary who has to team up with the mysterious Quan (Johnny Nguyen, who also wrote the screenplay) to retrieve a laptop from a group of Frenchmen in order to get her daughter back from her employer, is presented with a heavy-handed solemnity that leaves the viewer restless for the return of the combat scenes which, slick as they are, never quite compensate for the tedium endured beforehand. Apart from the fighting, the liveliest aspect of Clash is the soundtrack, particularly a pounding techno-rap during the opening and closing credits. However, the “dramatic” moments of the film are so woodenly conveyed by Ngo and Nguyen (whose charisma, sadly, does not come anywhere close to rivaling their physical prowess) that the grandiose opera singing accompanying these scenes becomes distracting, repetitive, and incongruent with what’s onscreen.

Prior to Clash, Nguyen, Ngo, and Le Thanh Son had collaborated on the allegedly far superior The Rebel. One hopes that while writing for his next outing, Nguyen will steer clear of the dusty Hollywood recycling bin, and create a script as fresh and exotic as his films’ main attraction.