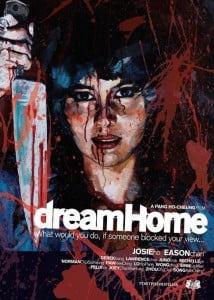 Probably the only horror film to involve the housing crisis, Dream Home wastes its creative concept by being unfortunately muddled. Though the protagonists’ obsession with owning a home at the sacrifice of her family and moral integrity could have been fascinating, the film is ultimately shallow and confusing.

Despite not offering any real insight into the film’s context and the protagonist’s motivation, the film is mostly hampered by its perplexing narrative. Though some satisfaction is eventually derived through the revelation as to why the main character goes on a brutal killing spree, it remains questionable in that it also dilutes the film’s overall impact. The movement from one time period to another is not well-organized, and many of these interludes bring little to the story. Even when they are offering some kind of insight, their lack of coherence makes them a hindrance, as they interrupt all narrative flow.

As with the attempted commentary on the housing crisis, the film’s attempt at portraying the inequality in gendered sexuality fails to be interesting or even particularly relevant. Sure, every woman in the film is either a mistress or has a husband with one, but why? That question is never answered, no reason or solution is ever presented, and it seems to be just another idea hanging in empty space with nothing to support it.

The only aspect the film excels in is violence. It can be appreciated for its innovation, its “true to life” messiness and finally its crazed sense of humour. The main actress, Josie Ho, also effectively sells these scenes due to the intensity of her physical and emotional performance. This film has many problems; her acting is not one of them. Even so, these sequences are lost in the unnecessarily complex plot and are literally chopped into oblivion, cut between boring and ineffective flashbacks.

Some gore-hounds may still enjoy this film for its moments of creative brutality, but most audiences will be left yearning for coherence. Though the film has high intellectual aspirations, it fails to capitalize on any of them. In the end, the only thing it will inspire in its audience is apathy.