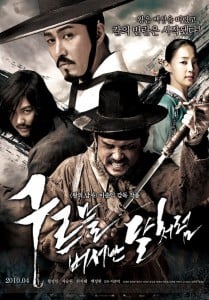 Korean cinema is perpetually rediscovering itself and finding new ways to combine genres and conventions, breathing new life into old stories and looking back at its own history to reconsider the present. Perhaps this would explain why the majority of my favourite films in the past decade have all come out of Korea. The prospects for more Korean film discoveries being made during this year’s festival looks extremely promising and leasing the pack is Blades Of Blood.

This year Fantasia will be screening the Canadian premiere of Lee Jun-ik’s historical blind swordsman drama Blades of Blood. In 2005, Lee Jun-ik’s gorgeous and provocative hit King And The Clown reinvigorated the Korean public’s enthusiasm for the genre. Five years later, Lee returns with adapting the immensely popular, award-winning comic “Like the Moon Escaping from the Clouds” which was awarded the Republic of Korea Cartoon Culture Literary Prize by the Ministry of Culture and Tourism. The film recalls many spaghetti westerns with themes of class struggle and the driving need for revenge. If your looking for a martial arts film with substance and style, Blade Of Blood would be right up your alley.

Lee Mong-Hak, a master sword fighter, is being pursued by his old friend: a deadly blind swordsman who has joined forces with the son of a lord assassinated by Lee, and a former lover with a broken heart. Carried by the winds of war, the quartet collides in a clash of words, wills and weapons.