With the “origin” stories of the main characters Jon and Suzie out of the way, Sex Criminals #4 inches closer to the end of its story arc while fleshing out Jon and Suzie’s motivations for robbing the bank in the first issue and looks at an important moment from her past. There are plenty of laugh out loud moments throughout the issue, and Matt Fraction begins to develop the “Sex Police” that showed up at the end of Sex Criminals #3 and their connection to Jon and Suzie. Chip Zdarsky’s art makes room for Fraction’s quick-hitting dialogue while also exploring the strange environments of the Quiet and/or Cumworld. His blocking and facial work complement Fraction’s writing, and the Quiet continues to be the trippiest place on Earth. There is one small problem with Sex Criminals #4, and it is that Fraction and Zdarsky focus on character vignettes and flashbacks at the expense of the moving the plot forward.

Sex Criminals #4 is a fun and refreshing look at human sexuality and relationships. Fraction and Zdarsky make Sex Criminals one of the funniest comics on the shelves using dialogue and physical gags ranging from a running joke about “butt stuff” to the employees of a porn shop going insane after Jon and Suzie reorganize the place. The humor helps readers care about these characters and their insane lives. Fraction and Zdarsky work in tandem to explore the ethics behind Jon’s plan to rob banks to save Suzie’s library, and they don’t portray him as a hero. A silent page with Jon and Suzie texting about their plan shows the lengths that they have gone to hide this venture from the people who care about them. With this and other montages, Zdarsky captures the awkwardness of a librarian and office grunt’s journey to become master thieves through his detailed depictions of their body language and facial expressions. There is also an anecdote from Suzie’s past that looks at her relationship with her friend Rachel and the Quiet and reveals some differences between her and Jon. 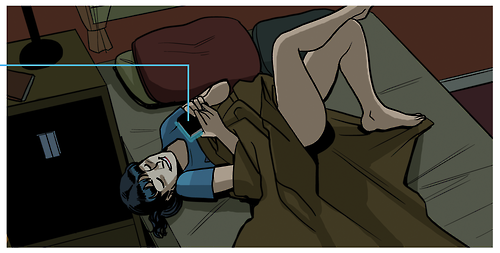 Fraction and Zdarsky also spend time with the series’ antagonists and build the world of Sex Criminals. Zdarsky makes the Sex Police wear white, and they represent sterile order in contrast with Jon and Suzie’s antics. In contrast with Jon’s long monologues and Suzie’s caption boxes, they are laconic in the speech focusing on neutralizing threats by “deviants” like the protagonists. There is a scene that offers a glimpse at the Sex Police’s leader in her civilian guise which prevents her from being a one-note villain. She might not even be such a bad person. In four issues, Zdarsky has used his art to create a well-developed secondary universe. From Suzie’s apartment to the Cumworld porn shop and even the Sex Police’s headquarters, he gives each place a distinct character with his pencils and colors. The Sex Police’s headquarters is stark white in the psychedelic sea that is the Quiet while Cumworld is filled with hilarious porn parodies of various Hollywood films. Even though the overall narrative timeline barely moves, Fraction and Zdarsky fill Sex Criminals #4 with enough witty dialogue, character interactions, and wonderfully surreal art to make it a great addition to one of the most unique current comics series.