Home
Entertainment
Fantasia 2010: Ricky D Recommends We Are What We Are (aka Somos Lo Que Hay)
Prev Article Next Article 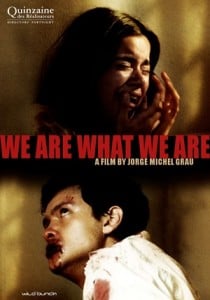 The final, complete version of Jorge Michel Grau’s We Are What We Are premiered at the Director’s Fortnight program in Cannes this year and had critics and audiences alike talking. Shocking, bloody and deeply moving are but some of the compliments it revived and now Montreal has the privilege of seeing what all the hype is about. We Are What We Are is a reinvention of the horror genre – an emotional portrait of a family bound by a terrible secret hunger and driven by monstrous appetites.

A middle-aged man dies in the street, leaving his widow and three children destitute. The devastated family is confronted not only with his loss but with a terrible challenge – how to survive. For they are cannibals. They have always existed on a diet of human flesh consumed in bloody ritual ceremonies… and the victims have always been provided by the father. Now that he is gone, who will hunt? Who will lead them? How will they slake their horrific hunger? The task falls to the eldest son, Alfredo, a teenage misfit who seems far from ready to accept the challenge… But without human meat the family will die.


Prev Article Next Article
Tags:Fantasia 2010, Fantasia Film Festival 2010, Somos Lo Que Hay, trailer, We Are What We Are