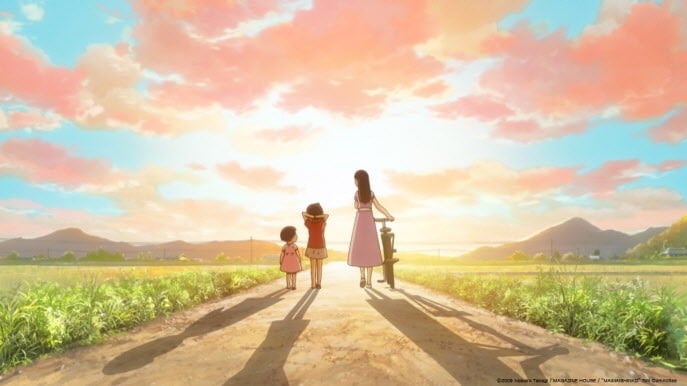 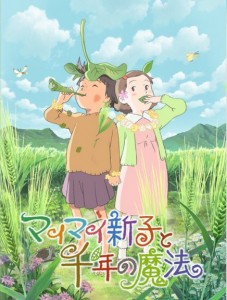 Mai Mai Miracle is the story about growing up amidst a changing world. Set ten years after the Second World War, life in rural Japan is at a turning point.  Inspired by the stories her grandfather tells her, nine year old Shinko, creates elaborate fantasy worlds about the rich history of her land. Her imagination is not simply a means of escape however, and it often helps her cope with the realities of growing up.

The film is set into action by the arrival of a new girl, Kiiko, who has moved from Tokyo with her father. She is reserved and quite apparently unhappy. Kiiko struggles with living in the country and is easily overwhelmed by new experiences. Her insecurities seem to lie in the death of her mother, as well as the fact she has remained mostly ostracised from other children her age up until this point.  Unlike the other children who take opportunity to tease the new girl, Shinko’s natural sense of curiosity motivates her to become Kiiko’s friend. Together, they delve into the history of their area, fantasizing about a lonely princess who once lived there. Whereas Shinko effortlessly transitions into this fabricated world, Kiiko’s imagination is not yet developed and she struggles with living within Shinko’s created fantasies. As much of the film is about Shinko having to face the realities of life and death, Kiiko is working towards finding her imagination.

The film approaches the transition from childhood into adulthood with a lot of maturity, despite choosing to adopt the perspective of 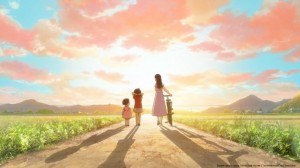 a child. One of the turning points of the film is when the father of one of the boys commits suicide over mounting debt. The emotional consequences of losing a parent aside, the event would also break up the group of friends, as the boy would be sent away to live with his mother and her sister. Shinko decides that they must avenge the boys’ father and seek out the bar. Their effort is childish, but the way it is portrayed is anything but. The owner of the bar and the woman of ill-repute who apparently led the father astray actually embrace the children with a great deal of sympathy, bringing them into the place, and reminiscing sweetly about what a great man the father was.

The boy’s conclusion though, takes an unexpected turn. Though he held a lot of respect for his father, he also remembers the abuse and neglect that his father’s alcoholism caused. He still fears leaving the town, but becomes resolute that when he grows up, he will teach his children all the games that his father never cared to teach him. Shinko reminds him that he is still young, and the best way to do this is to play and have as much fun as he can while he still can.

This whole set of events is important in Shinko’s development as she is confronted with the fact that her “magic” may not be real. As hokey as it sounds, it is important for her to realize that magic is not a physical entity, nor is it the key to happiness. Magic is neither the force behind her happiness nor those of the people who surround her. It is only through new experiencing and coping in positive and healthy ways are they able to find peace and grow up. Luckily for her, Shinko’s grandfather provides an extremely strong foundation that allows her to see change as the opportunities for new beginnings. Even death is presented as simply a transition into a new way of life. Her grandfather tells her that it doesn’t mean that someone will physically return one day, but they will either continue to exist within our memories, or their departure signals a new life for someone or something else. 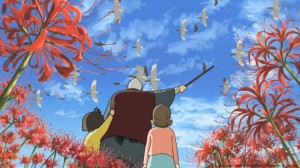 The film is beautifully animated, and features a lot of innovative or at least, risky, techniques. Transitions from the “real” world into Shinko’s fantasy are often ushered using her own childish drawings. A lot of unconventional camera techniques are also used. In particular, there is a moment when Shinko is falling and the camera looks up at the sky moving in a smooth, but somewhat unpredictable way that is an extremely evocative moment of first person perspective. The night scenes in particular are stunning; some of the best I’ve seen in an animated feature. The score is also beautiful; somewhat unconventional, but entirely fitting.

Mai Mai Miracle is hardly the most revolutionary anime film of recent years, but it is entirely successful at what it sets out to do. It is a true and wonderful story about childhood and takes some unexpected risks that pay off. This is only director Sunao Katabuchi’s second feature length film, and he already shows all the maturity and restraint of a well seasoned filmmaker. Fans of My Neighbour Totoro will probably really enjoy this film as both follow similar arcs, however present their character’s growth in a very different way.