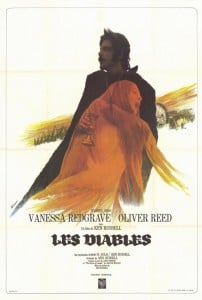 Nearly forty years after its release, The Devils remains shocking. It is both unabashedly critical of establishment while also refusing to adhere to the commonly accepted conventions of “serious” cinema.  Stylistically, the film employs an unconventional score, an overzealous use of zoom (to be fair, it was the 70s) and non-period detailing. Despite the film’s exploitative presentation of sex and violence, there is little doubt that it is the rather cruel depiction of religion that continues to drive the film’s controversy.

In order to gain political control of France, Cardinal Richelieu (Christopher Logue) seeks to destroy the influence of Father Grandier (Oliver Reed), a sexually liberated Priest who has been charged with running the fortified town of Leon. In an attempt to ruin Grandier’s reputation, they accuse him of causing the possession of Sister Jeanne (Vanessa Redgrave), a hunchbacked nun. The film utilizes these three major characters to represent different facets of religious belief and devotion.

Though the Cardinal is the least present of all three, his influence is the most dominating. As a figurehead of a corrupted church, his control spreads like a frenzied violence. He uses the ignorance of the people in order to gain control over their minds, operating on a level that exploits their anxieties and fears. On the other hand, Father Grandier stands out as a religious renegade with few “real” supporters. Though morally dubious, he represents the noblest representation of religion. He advocates a personal connection with God, as well as the freedom of the people. He uses his power and education in order to inspire his followers, encouraging them to stand independent from France and maintain their democracy. Though he is able to rouse crowds early on, they easily turn against him as the film progresses.

Sister Jeanne is the most unfairly abused figure of the three. She and her order are continually threatened and bullied into 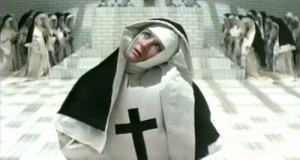 manipulating the fate of the town. The women are constantly framed in tightly enclosed spaces or behind bars. It may be a visually obvious choice, but the convent could have just as easily been painted as a haven from the corruption of the outside world. The nuns’ possession remains somewhat ambiguous; is their insanity driven by a psychosis, frustration born from their cloistered life or by unadulterated hatred?  Though Jeanne seems to orchestrate the fate of many, she never has any real control. It soon becomes apparent that no matter what she would do or say, some political pundit would find a way to make it work in their favour. She is simply a convenient tool in destroying Father Grandier.

The Devils‘ classification as a horror film becomes increasingly fitting as the film wears on. Its mixture of modernistic fantasy, revisionist history and histrionic emotion all contribute to its unique sense of dread. Though disturbing, the film also manages to emphasize the frailty of the human body in an extremely humbling way. The body is treated as an extension of the soul and the actor’s physical performances are able to translate a wide range of emotions and ideas simply in how they depict their broken bodies.

The Devils is a brash and daring film from one of England’s most underappreciated filmmakers. Though not all audiences will warm up to its idiosyncratic style and extreme depiction of religious hypocrisy, those who are taken by the fantasy and horror will have a hell of a time.