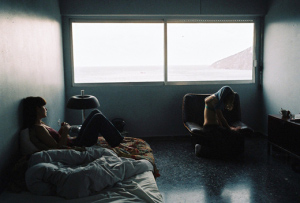 Last year, the entire “Sound On Sight” team placed Giorgos Lanthimos’ family- based drama Dogtooth on their top five films of 2009 (Listen to our review on podcast #165 or read my review here). The Dogtooth director who has kept busy preparing for his next film, has also been preocupied producing Athina Rachel Tsangari’s Attenberg. Little is known yet about the much anticipated film but we do know it features an original score from Radiohead’s Jonny Greenwood who also provided the score for There Will Be Blood. Attenberg which is set to make it’s world premeire at the 2010 Venice film festival follows Marina, a 23 year old growing up with her architect father in a prototype factory town by the sea. Finding the human species strange and repellent, she keeps her distance. Instead she stubbornly observes it through the songs of Suicide, the mammal documentaries of Sir David Attenborough, and the sex-ed lessons she receives from her only friend, Bella. A stranger comes to town and challenges her to a foosball duel, on her own table. Her father meanwhile ritualistically prepares for his exit from the 20th century, which he considers to be “overrated.” Caught between the two men and her collaborator Bella, Marina investigates the wondrous mystery of the human fauna. Watch the trailer after the break.

The second film from Greece which has everyone excited is Yiannis Economidis’s Mahairovgaltis. Again not much is known about the film since it is yet to screen anywehre but they have just released a trailer. Here is the synopsis and the trailer will follow after the break.

It’s the story of Nick, a man who lives in the country; a man who lives for the here and now. When his father dies, he’s urged to leave small town life behind and head to Athens where his uncle offers him food, board and an easy job but Nick’s life takes a sharp turn once he arrives in the metropolis.