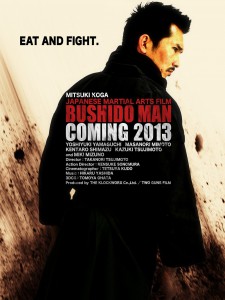 Ingenuity can go a long way in filmmaking. It is one thing to have a large budget and get creative, it is an altogether different matter to be forced into creative thinking and film techniques because a team of creative minds have no serious budget to speak of. Perhaps it is in those instances that the fruit born out of the efforts of filmmakers shines brightest. When one has no money to spend freely, one must think a bit outside the box after all. Enter Bushido Man, which had its North Ameican premier at the 2013 Fantasia Film Festival, a movie displaying a feverish amount of exuberance.

It is after a long and arduous journey of personal discovery that Toramaru (Mitsuki Koga) returns to the Cosmic Way school of martial arts. His master (Yoshiyuki Yamaguchi) is especially pleased to see is prodigal pupil return healthy and, one hopes, wiser. The two sit down as Toramaru begins sharing his first hand experiences in the martial arts as he traveled all across the country to challenge various master of specific fighting techniques. What interests his teacher the most is guessing the meals the protagonist ate before each contest, for as the teacher always said, to know one’s  enemy is to know what one’s enemy eats.

First things first, Bushido Man’s creative team pull out all the stops in order to create the most surprising, amusing, action- packed comedy they can. Even though many aspects bare no relation to reality, such as the idea of food having seminal importance in the life of a warrior who follows Bushido, the film as a whole tosses in enough ‘off the wall’ ideas that stick, producing a rousing good time. Inventiveness,  even when the concepts are at their most absurd, add a lot of character to the picture and keeps the viewers constantly guessing what might happen next.

Additionally, many of the small details that might seem perfunctory are in actuality fully fleshed out and purposeful. The idea of Toramaru performing a pilgrimage across Japan adds a radically different flavour, pardon the pun, to the proceedings. Entirely new locations are showcased, both when the protagonist is stuffing his face with dishes and with respect to the areas where the contests are fought. Jungle, mountain top, dystopian beach, harbor, dojo, forest, the movie rarely stays too long in a single place, usually just long enough for the audience to get a feel for it. The same goes for the food, which is never the same from course to course. These nice touches, to name but a few, constantly help expand the world of Bushido Man. Rather than feel like a small movie, Tsujimoto ends up crafting something that feels much larger than what one might expect. 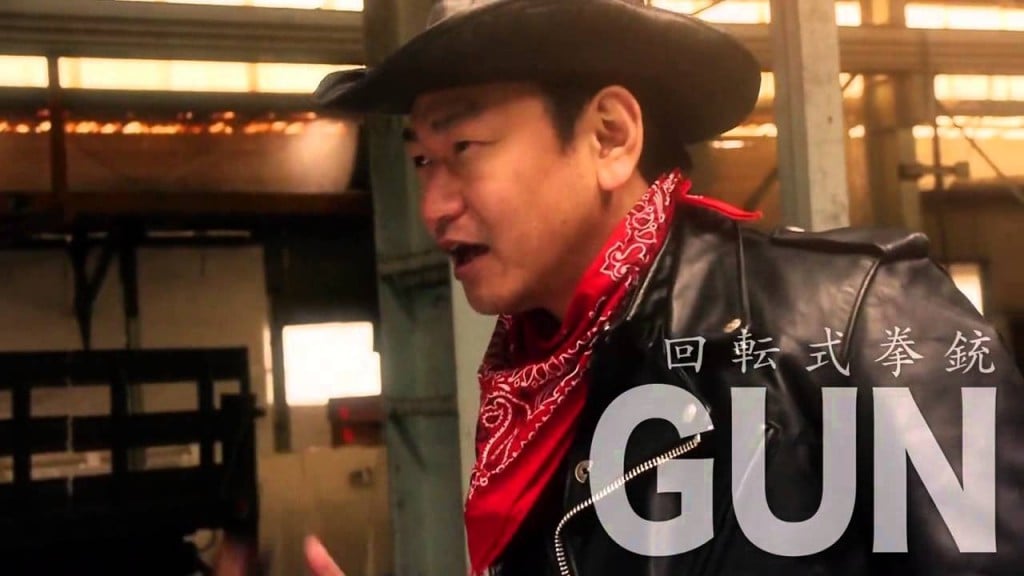 Certainly the most critical aspect in which Bushido Man reinvents itself from start to finish is with the martial arts battles. Much like with a Shaw Brothers classic, Heroes of the East, wherein a hero finds himself confronted by a series of foes who each specialize a particular martial art,  director Takanori Tsujimoto throws Toramaru a multitude of completely different challenges, ranging from hand to hand Kung fu, to samurai katana and wrist pistols. Yes, wrist pistols. The filmmakers wisely escalate the level of difficulty of each challenge, every subsequent combatant wielding a deadlier weapon than the last. More critical still is the fact that most of the action in Bushido Man looks far better than any sort of low budget action romp. The cinematography and editing are genuinely excellent, lending each battle its unique type of danger and adrenaline rush, with special mention going to the Kung fu, yakuza knife and blind swordsman combat sequences, all three of which are extremely visceral.

Lest they be overlooked admits all the wacky mayhem, actors Mitsuki Koga and co-star Yoshiyuki Yamaguchi, who play the hero Toramaru and his sensei respectively, are tremendously charismatic and charming in their own ways. Koga exudes a quiet youthful confidence whereas Yamaguchi is a wily old master, very excited at the idea of guessing whom his most gifted pupil tested his skills against. They handsomely play off each one another’s strengths, proving Bushido Man some of its most comically potent moments.

Bushido Man is not the type of movie that gets made very often. A samurai film set in modern day (with allusions to some form of dystopia alternate reality) a ridiculous amount of completely different weapons used, tons of comedy, and an end credits zinger to completely annihilate all end credits zingers for the rest of time. It fact, it is much more than a zinger, but that may already be saying too much… Suffice to say, if any martial arts fans are provided the opportunity to catch Bushido Man, be it in theaters, home video or any form of legal streaming service, they should get themselves some salmon sushi, some noodles, a bit of steak, some salad, a few packaged corn sticks and get ready for some fun.