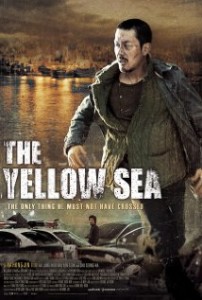 The Yellow Sea (Hwang Hae)
Directed by Na Hong-jin
Screenplay byNa Hong-jin
South Korea, 2011
–
The actual Yellow Sea, or the area of the East China Sea between the Chinese mainland and the Korean peninsula, is a mostly symbolic presence in Na Hong-jin’s (The Chaser) second film. While only on screen for a couple sequences (which are shot gorgeously), its role as the alienating and isolating expanse that divides China and Korea lends an air of hopelessness to the The Yellow Sea and its wayward protagonist that persists throughout. But it’s not all big, cold expanses of emotional isolation: there are many, many stab wounds as well.

Film begins as Ku-Nam (Ha Jung-woo), a drunk, gambling, taxi driving Joseonjok (Korean living in China), squanders what physical currency he can attain in an attempt to pay off his mounting debt.

Turns out his wife hopped a train to South Korea with promises of a quick and lucrative return, but her less than speedy homecoming means that Ku-Nam is hampered with her visa fees, frequent attention from shady debt collectors, and the constant insistence from everyone he knows that she is a cheater and/or a whore and is never returning. Fortunately, the daily loan shark wake-up calls give way to a handy devil’s bargain: crime lord Myun-Ga (Yun-Seok Kim) will give Ku-Nam a fresh start if he just pops over to South Korea for a good old contract kill. 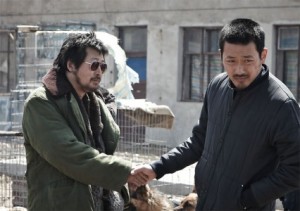 Myun makes arrangements for Ku-Nam’s passage and the Yellow Sea debuts, horrifyingly, as a large group of Joseonjoks are smuggled into the dark, dank bowels of a fishing boat. Once in Korea, the film chronicles this desperate, capable man as he’s engulfed by cultural forces and criminal elements he knows nothing about. The moral quandary of killing a man to relieve one’s debt–or even to seek out one’s wife–is not at all central to this film. Na is far more interested in detailing the isolation of a Joseonjok man ceaselessly degraded in his homeland than sweat a little cold-blooded murder (Note: there is a lot of cold-blooded murder). Ku-Nam was chosen for hit explicitly because of his expendability and affordability, but it’s his relative humanity in the face of a despicable rogue’s gallery that makes him heroic and keeps him alive.

Sea is deliberately paced, but its fairly complex plot, large supporting cast, and nervous, shifting energy make it riveting throughout. Ha Jung-woo delivers an understated, moving performance and carries the film well. His Ku-Nam skillfully balances cleverness alongside ignorance, and apathy alongside desperation. The film really awakens, though, when Yun-Seok Kim shows up. His Myun-Ga is a glorious asshole–fantastic at killing people and better at emasculating them. He also exemplifies this film’s secret strength: its dark, dark humor. The rest of the cast, while filling far less meaty roles, is good.

The camerawork here is skilled and original. The film’s faded palette is beautiful, and handheld shots are fluid and evocative. Na has a refreshingly simple approach to his fight scenes, and while not all 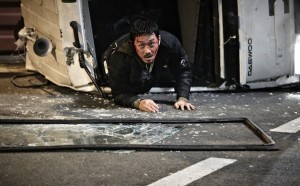 that stylish or impressive, they have a human weight to them. Unfortunately, the success of Na’s handheld approach really falls apart during a couple of the action sequences, wherein nothing is clear and everything is dizzying. Though it’s far from a deal breaker, it is frustrating that the climactic action should be a low point in a Korean gangster film. But that’s disingenuous anyway, as Sea never embraces that, or any label. Na simply aspires to show a portrait of a man caught adrift, alone, between two countries… with a knife.