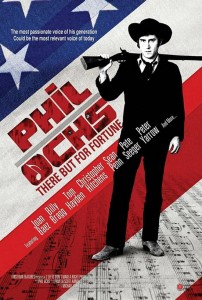 Phil Ochs: There but for Fortune

Phil Ochs: There but for Fortune stands apart from typical 1960s documentaries. This is due largely to the intelligence and passion of Phil Ochs himself. This is not a film about a moment of disillusionment with American culture, but rather the desire to challenge and change. Ochs stands apart as a singular talent who blends a genuine political criticism with a wicked sense of humour.

The film jumps right into Ochs’ career. We will occasionally bounce back into the past to establish a bit of context but the film does not dwell on his childhood or adolescence. His music is omnipresent, there are few moments that are not coloured with his protest music. The music is not just a backdrop, but appropriately as a means of suggesting both the power or powerlessness of the musician during the is era.

There is an unfortunate trajectory though, a sort of emptiness in Ochs’ work. He never becomes the success he wanted and his music does not seem to have the power to change very much at all – at least a measurable change. What is most important perhaps, is the message and challenge to the status quo that Phil Ochs suggests. His political presence, among others, stressed the importance of action over simple rhetoric. There is a tragic sense of loss in the failures in the movement, with little sense of romance. As things seemed to get worse, Phil Ochs’ health eventually seems to fade.

Ochs turns to alcohol and his psychological state worsens as he battles with bi-polar disorder. His eventual suicide leaves a dark mark on the life of the people around him. Ochs’ stands out as more than just a talented musician, but a man who had a large group of very close friends. The film does not end on a hopeful note, but the film certainly resonates. Instead of packing everything neatly, there are many loose ends for the audience left to ponder. This is a great film about a great man.