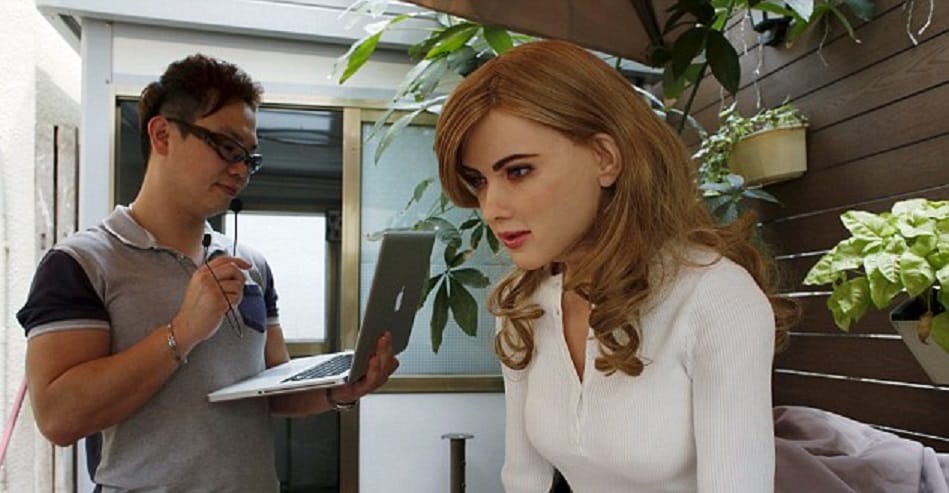 Look, let’s be honest here….one day, perhaps not very far off, robots will be developed for…. ahem…..adult recreational purposes. Every new technology finds itself used for adult entertainment fairly quickly, I mean there’s already VR erotica for heaven’s sake. Robots are no different. As Futurama so cannily predicted, it won’t take too long after workable robots are developed that ones in the likeness of Hollywood celebrities for less-than-PG purposes will find their way into existence. It’s creepy and weird and pretty wrong, but inevitable. I just….kinda hoped it wouldn’t happen in my lifetime. But alas, some dedicated soul has built themselves a robot Scarlett Johansson, and while it was made without sex in mind, the door’s been opened. Someone right now is watching the video below and working out the logistics. No going back, people.

The robot was developed by Ricky Ma, a graphic designer who apparently dropped 50 THOUSAND dollars onto this thing. Ma claims that the robot was modeled after a Hollywood star, but refused to say which one. Looking at the robot…and trying not to wince when you do so….it isn’t hard to see who.

What I find interesting is that this raises so many interesting and weird ethical issues. If I were Scarjo I’d be creeped right the heck out right now, and probably looking into some kind of legal recourse to stop this. Admittedly, it’s far from a perfect likeness, but it’s still close enough to be unsettling.

What do you think? Is creating a robot in someone else’s likeness, even for pure purposes, going too far? Check out the video below and let us know what your thoughts are.