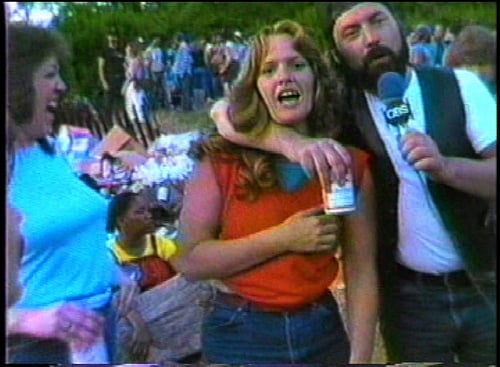 Heavy Metal Picnic is a follow-up to the short cult film, Heavy Metal Parking Lot, which depicted the Maryland Heavy Metal scene during the mid-1980s. Heavy Metal Picnic mixes the home video footage from a 34 hour concert called the “Full Moon Jamboree”, as well as contemporary footage of the people and musicians who made it possible.

What makes this event such a compelling film subject, is that it takes place right at the tail end of an era. Even in that 1985 footage people seemed well aware that this might be the very last concert of it’s kind. The “Psychotic Revolution” (phrased coined by concert promoter/organizer Billy Gordon), was upon them. This revolution defined by growing technology came perhaps a little later than expected, but it nonetheless suggests both the foresight of Billy Gordon as well as the underlying paranoia of this moment in time.

The moments of wisdom of the film are actually quite thoughtful and engaging. In particular the idea that America is getting smaller, rather than bigger. This is a rather mournful statement tinged with disillusionment. The freedom of previous generations and revolutions are all but evaporated amidst endless connectivity. It is the other side of the “open world”, a sense of small individual community is lost. This is by no means a form of conservatism, but the lost ability of being completely taken in a moment, being isolated in the best possible way.

Of course though, the film stands above all as being about the music. There is unfortunately not all that much aside from Asylum. As a live band, they are brimming with energy and serve as an integral centre-piece for the event. The film could have perhaps benefited from a bit more of it.

Heavy Metal Picnic celebrates a way of life that seems to have been lost. As we visit the people involved in the Full Moon Jamboree some twenty years later, many of them seem to have held on to that original verve for fun and happiness. The way that both eras connect remains somewhat ambivalent, but I personally like the home-made quality of the whole project. From the original VHS to contemporary digital, the film is lovingly assembled.