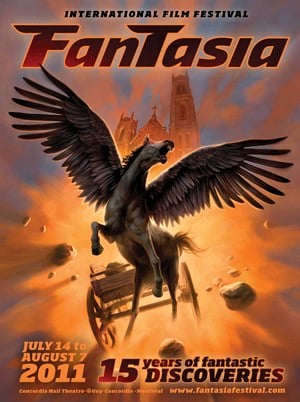 The Fantasia Film Festival is by far my favourite film festival in the world and I’ve been impatiently awaiting some news of what films they’ll be screening this year. Considered the world’s largest genre film festival and running over three weeks long, the event is celebrating it’s 15th edition this year and the lineup is already pretty incredible. In the past I’ve seen some of my favourite films premiere at the fest and last year I wrote up a list of the best films ever screened at the fest which you can read here. This year Kevin Smith’s Red State opens the festival and directors Robin Hardy (The Wicker Man) and Richard Stanley (Hardware, Dust Devil) will be in the house to discuss the occult on film. The full lineup which includes 130-feature titles will be announced on July 7. For now here is the first wave of films from the press release. OPENING FILM – KEVIN SMITH’S RED STATE
Fantasia is proud to open the 2011 edition of the festival with the Canadian Premiere of Kevin Smith’s acclaimed Sundance hit RED STATE. The director of CLERKS and ZACK AND MIRI MAKE A PORNO has made a jump to an entirely new genre with tremendous success. RED STATE is a powerhouse film featuring fantastic performances by Michael Parks, Academy Award® winner Melissa Leo and John Goodman. This adrenaline rush is quite simply one of the best horror works of the year and The Hollywood Reporter noted that “young audiences will eat it up for its unmistakable rebel attitude.” RED STATE is distributed by Phase 4 Films which plans on releasing the film in theatres this August.

A LIFETIME ACHIEVEMENT AWARD FOR JOHN LANDIS
In celebration of the 30th anniversary of AN AMERICAN WEREWOLF IN LONDON and to celebrate his return to feature filmmaking after a 12-year sabbatical, Fantasia will honour the career of director John Landis with a Lifetime Achievement Award. Landis’ impressive filmography includes such classics as THE BLUES BROTHERS, ANIMAL HOUSE, TRADING PLACES, KENTUCKY FRIED MOVIE and Michael Jackson’s trailblazing THRILLER video.

GABRIEL THIBAUDEAU’S ORIGINAL LIVE SCORE TO ACCOMPANY RARE PRINT OF THE PHANTOM OF THE OPERA
In collaboration with the Cinémathèque québécoise, and following the huge success of last year’s METROPOLIS event, a special presentation of a rare, pristine 35mm print of THE PHANTOM OF THE OPERA will take place at Montreal’s premiere concert hall, Place des Arts, where Gabriel Thibaudeau will lead a 30 person orchestra through his original score to the 1925 silent classic, directed by Rupert Julian and starring Lon Chaney.

WORLD PREMIERE OF ROBIN HARDY’S THE WICKER TREE + BOOK LAUNCH
38 years after directing THE WICKER MAN, a film widely hailed as the CITIZEN KANE of genre cinema, Robin Hardy has reteamed with producer Peter Snell and British Lion to make THE WICKER TREE. This hugely eccentric “spiritual sequel”, based on Hardy’s novel COWBOYS FOR CHRIST and featuring performances by Graham McTavish and Christopher Lee, is one of the most hotly anticipated genre films of the decade. Fantasia will be unveiling the world premiere of this Pagan phantasmagoria, in the presence of Hardy and Snell.

The screening night will be a double birthing as it will also feature a book launch for Hardy’s THE WICKER TREE novel, being published in North America for the first time this July!

Furthermore, Fantasia will host a special event that will feature Robin Hardy in conversation with fellow UK filmmaker Richard Stanley (HARDWARE, DUST DEVIL, THE THEATRE BIZARRE – the latter also having its world premiere at the festival), in discussion on the occult, mysticism and moviemaking.

A MASTER CLASS WITH RYOO SEUNG-WAN AND THE CANADIAN PREMIERE OF THE UNJUST
South Korean auteur filmmaker Ryoo Seung-wan (CRYING FIST, CITY OF VIOLENCE, ARAHAN) will be returning to Fantasia for the Canadian Premiere of his ingenious new thriller THE UNJUST (Official Selection, Berlin Film Festival 2011). While in town, he will also host a master class on action film staging and choreography. LYNN LOWRY AND UDO KIER TO ATTEND GALA WORLD PREMIERE OF THE THEATRE BIZARRE
We’re ecstatic to announce that in addition to all seven THEATRE BIZARRE directors, we’re also expecting actors Lynn Lowry and Udo Kier at the gala world premiere of this stellar anthology film.

ATTACK THE BLOCK – UK – Dir: Joe Cornish
This insane laughfest depicting a British teen street gang defending their block against an alien invasion became an overnight sensation after its launch at SXSW in April. Co-produced by Edgar Wright, starring Nick Frost and featuring some of the funniest moments you’ll encounter anywhere this year – on or off this planet. Quebec Premiere.

BRAWLER – USA – Dir: Chris Sivertson
Fantasia veteran Sivertson (THE LOST, I KNOW WHO KILLED ME), will be returning to Montreal for the World Premiere of his latest knockout, BRAWLER, set in the world of extreme fighting, starring and co-produced by Marc Senter (RED WHITE & BLUE, THE LOST). World Premiere hosted by Director Chris Sivertson and Actors/Co-producers Nathan Grubbs and Marc Senter.

THE DEVIL’S ROCK – New Zealand – Dir: Paul Campion
The feature directorial debut from gifted New Zealand visual effects artist Campion (the LORD OF THE RINGS and NARNIA films, CLASH OF THE TITANS remake) is an intense occult thriller taking place in WW2 on the eve of D-Day, with a single soldier uncovering a Nazi plot to conjure supernatural forces with which to win the war. A satanic Nazi chamber piece featuring three characters and bottomless tension. North American Premiere hosted by Director, Screewriter and Executive Producer Paul Campion and Actors Matt Sunderland and Karlos Drinkwater.

EXIT – Australia – Dir: Marek Polgar
Taking place in a labyrinthine city where many individuals are looking for a mystical door that could lead them to a better world, this promising genre film from a visionary director explores the theme of urban alienation while remaining a poignant piece of cinema that will audiences breathless. Splendid and cerebral, EXIT opens the door for a distinctive new voice in fantastic cinema. World Premiere, hosted by Director Marek Polgar and Screenwriter Martyn Pedler.

A LONELY PLACE TO DIE – UK – Dir: Julian Gilbey
This film hits levels of intensity that are absolutely exhilarating. Think CLIFFHANGER with characters you actually care about, fuelled with the adrenaline and panic of THE DESCENT. Bafta-nominated director Gilbey (RISE OF THE FOOTSOLDIER) trained himself in rock climbing in preparation to shoot this film the right way, and does it ever show. The imagery, stunts and staging he manages here will suck the breath clean out of your lungs. Winner of Jury Awards for Best Feature and Best Director when it launched at ActionFest earlier this year, it stars Melissa George. Canadian Premiere, hosted by Director, Screenwriter and Editor Julian Gilbey.

LOVE – USA – Dir: William Eubank
Opening this year’s edition of Fantasia’s Camera Lucida section, LOVE is a marvel. Rebuking the current conventions of science-fiction cinema coming from Hollywood with a cerebral approach to the genre closer to Kubrick’s 2001, it questions Man’s place in the universe through a fascinating tale that alternate between two distinct epochs, a violent past and an uncertain future. Produced by Angels & Airwaves (the alt-rock effort led by Blink-182’s Tom DeLonge) LOVE conjures pictorial perfection, promising to be an unforgettable experience. International Premiere, hosted by Director, Writer, Cinematographer and Production Designer William Eubank, Actor Gunner Wright and Executive Producer Mark Eaton.

MARIANNE – Sweden – Dir: Filip Tegstedt
In recent years, Sweden has begun emerging as a country to watch when it comes to hypnotic, adult genre filmmaking, and MARIANNE continues this pathway. A guilt-ridden father, grieving over the death of a wife he had been cheating on, finds himself haunted by more than his conscience in this eerie, character-driven supernatural horror film. World Premiere hosted by Director, Screenwriter and Producer Filip Tegstedt.

MONSTER BRAWL – Canada – Dir: Jesse T. Cook
Those of you with equal love for monsters and wrestling are about to be slammed through the mat by this outlandish creation that combines the two with glee. That’s right, your favorite monsters bashing the unlife out of each other within a setup designed to feel like a pay-per-view sporting event. Features Dave Folley, Jimmy Hart, Art Hindle, Kevin Nash and… monsters! World Premiere hosted by Director, Screenwriter and Producer Jesse T. Cook, Producers John Geddes and Matt Wiele, Actors R. J. City, Art Hindle, Robert Maillet and Rico Montana, and many more members of the cast and crew.

RABIES – Israel – Dir: Navot Papushado & Aharon Keshales
Israel’s first horror feature is all about subverting expectations as a blood-soaked black comedy/horror/thriller that understands the genre conventions and uses them as sleight-of-hand to deliver one surprise after another like a twist-ripped celluloid corkscrew ground into your skull. A major hit at the Tribeca Film Festival, RABIES is heaps of misanthropic fun, with spikes of social commentary and a surprisingly affecting sense of tragedy stabbed into the mix for maximum potency. Canadian Premiere. Hosted by Co-Directors and Screenwriters Navot Papushado & Aharon Keshales.

RETREAT – UK – Dir: Carl Tibbets
Cillian Murphy and Thandie Newton star as a couple who journey to an island retreat in order to heal recently-opened wounds. They are completely isolated from the world. Alone. That is, until a blood-spattered man (Jamie Bell) washes ashore with terrible news of an airborne plague sweeping across Europe. A brilliantly-staged slow-burn thriller that builds to absolutely ferocious horror, RETREAT is one of this year’s strongest discoveries. World Premiere hosted by Director Carl Tibbetts.

SAINT – Netherlands – Dir: Dick Maas
Santa Claus is coming to town, and that’s bad news for everyone in this stylish Dutch oddity from the maker of THE LIFT. SAINT is a very Dutch horror film, packed with many Christmas stockings full of local flavor and bizarre terror sequences. Meanwhile, the moments with SAINT’s teen protagonists have the feel of an ’80s Wes Craven film, making for a very fun death dance in horror’s global melting pot! Canadian Premiere.

URBAN EXPLORER – Germany – Dir: Andy Fetscher
Beneath the city of Berlin is an extraordinary network of abandoned bunkers and tunnels, shadowy remnants of the Nazi era. This film – one of the most unsettling that you will find in our 2011 lineup – opens with four young urban explorers from different countries meeting up at a Berlin nightclub, beneath which is rumored to be a pathway of catacombs that lead to a legendary Third Reich bunker. They descend into the tunnels and…. We won’t reveal another beat! North American Premiere.

VAMPIRE – Canada/USA – Dir: Shunji Iwai
The English-language debut from the acclaimed director of SWALLOWTAIL BUTTERFLY and ALL ABOUT LILU CHOU-CHOU is a haunting existential horror/drama. It will be making its Canadian launch at Fantasia after bowling audiences over at Sundance, Berlin and the Hong Kong International Film Festival. Canadian Premiere.

THE WHISPERER IN DARKNESS – USA – Dir: Sean Branney
You are about to encounter what very well may be the single most successful H.P. Lovecraft adaptation ever to lick fear across a screen. Shot with an aesthetic, production design and performance style angled to emulate the feel of a ’30s/’40s Universal horror film – without falling into camp – WHISPERER arrives like shadows out of time, a discovered relic from another dimension. A genuinely scary film and a hellishly great time. Canadian Premiere.