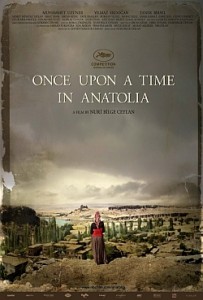 Once Upon a Time in Anatolia

The title of the latest offering from Turkish director Nuri Bilge Ceylan might indicate companionship with famous films from Sergio Leone or Hark Tsui that share a similar namesake, but don’t enter Once Upon a Time in Anatolia expecting action sequences, drifting loners or harmonicas. Ostensibly a road movie and character study, Ceylan’s film asks questions more likely to be found in an Errol Morris entry than a titular counterpart.

The characters are hard not to see as allegories. A doctor, a prosecutor, a police commissioner and a prisoner set out, along with a small convoy of army men and diggers (themselves caricatures in their 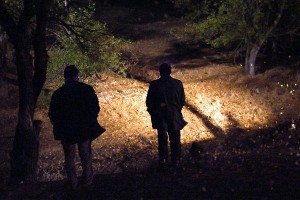 own right), to search for the body of the prisoner’s victim. Each man’s past gradually comes to light, though that past rarely directly impacts the search. Instead, the men react to and off of one-another. Where at first job title seems to dictate methodology and affect, as the film progresses and layers of past are uncovered, it becomes clear that Once Upon a Time in Anatolia is imitating the mechanism of a small society.

In many ways, Once Upon a Time in Anatolia recalls recent Romanian films like The Death of Mr. Lazarescu in its mix of dark humor and social commentary, set largely in culturally recognizable locations and taking place over a very enclosed time frame. Like what is sometimes deemed a “Romanian New Wave,” Ceylan’s film features dialogue that at times seems to sidetrack into digression, but which eventually plays as either character revelation or analysis of the given surroundings and situation.

But ultimately this is a film that seeks to differentiate fact and fiction – or perhaps posit that there can be little difference between the two. The prosecutor Nusret (Taner Birsel) tells Doctor Cemal (Muhammet Uzuner) a story about a woman who died because she said she was going to. The willing believer – the prosecutor – argues that no autopsy was necessary as it was evident she died from a heart attack. The skeptic – the doctor – sees things differently; something nearly undetectable could have triggered a reaction. This tale, returned to time and again, alongside the tireless, often fruitless search for the body, foregrounds the truth versus lie theme at play. 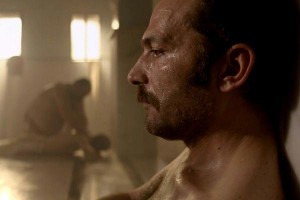 Dispensing of now overwrought multiple perspective replay strategies, Ceylan instead makes nearly every event in the film subject to interpretation. Police Commissioner Naci (Yilmaz Erdogan) interrogates the prisoner behind closed doors and claims to have made a breakthrough via simple conversation, Nusret makes up quotes from others to fit in his report, the army man struggles to estimate where they are located geographically – these events, from the big to the small, represent a truth that is neither definite nor clearly graspable. In a way quite similar to Errol Morris’ recent run of documentaries, Ceylan questions not the motivation for a crime or any one action, but rather the validity behind the underlying emotions of each character: grief, revenge, nostalgia.

Try to guess who the protagonist is from the opening frame. Try halfway through. Try at the beginning of the final act. It’s nearly impossible. There 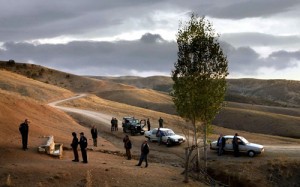 is a protagonist in Ceylan’s film, but the focalization shifts so frequently, the commentary is spread so evenly, that when a protagonist does emerge in the final 20 minutes, it’s a refreshing payoff, itself a relief to suspense.

There’s a moral question that is posed in the final sequences of the film. It’s a question that hovers over the majority of the film, but is only truly expressed in the ending scene. It’s a perfect scene that simultaneously rejoices in youth, expresses regret for the past, and seeks to correct the future. Ceylan’s direction, spare, symbolic, and with finely detailed time shifts, allows the ending to breathe. For the patient audience it’s a heartfelt and rewarding conclusion.


Prev Article Next Article
Tags:Nuri Bilge Ceylan, once upon a time in anatolia