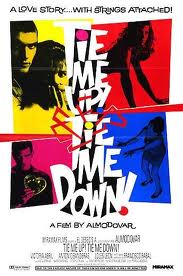 In 1990, shortly after The Cook, the Thief, His Wife, and Her Lover was refused an R rating by the Motion Picture Association of America (MPAA), Harvey Weinstein of Miramax Films found himself confronted with the exact same dilemma. The film in question this time was Pedro Almodovar’s Tie Me Up! Tie Me Down!.

The film, starring a young, thin Antonio Banderas, is completely different from The Cook, with no extreme violence to speak of, and certainly no cannibalism. Any scandalous material in the film can be boiled down to two scenes. One scene involves Marina, played by Victoria Abril, taking a bath. During the bath, she winds up a sex toy which, hilariously, is a little scuba diver attached to a kind of missile. When Marina lets him go in the water, he kicks his flippered feet, launching himself and the missile at a pitiful pace towards her open legs. The second scene that probably irked the all-parent MPAA ratings board, was a prolonged, sweaty sex scene. Some adult material for sure, but certainly not in service of a pornographic film, and certainly not deserving of an X rating.

The film itself is about the sweet but unstable Ricky, who kidnaps Marina, an actress he’s obsessed with, and all of the ridiculous situations that unfold as he holds her captive and waits for her to fall in love with him.Some criticized this black comedy for depicting victimization of women, but maybe it’s just a metaphor for those cases where love takes some convincing and persistence. Seen in that way, it’s actually entertaining and funny, even if the end is predictable and kind of irreconcilable.

With two choices laid out before him (self-apply an X rating or release the film without a rating), Weinstein took it upon himself to create a third option. He sued the MPAA and hired one of the most famous civil rights lawyers in American history, William Kunstler. Why did Miramax Films hire Kunstler, defense lawyer for the “Chicago 10” Vietnam protesters, including Bobby Seale, leader of the Black Panther Party? Miramax could have chosen an entertainment lawyer to take the rating dispute to court, but Kunstler symbolized a greater issue that many filmmakers at the time felt was at heart: the freedom of speech.

“Many filmmakers and distributors.” the New York Times wrote in the months leading up to the case, “say that the system is tantamount to censorship…” By 1990, X and unrated films found themselves with so few options for screening and advertising that the MPAA’s power over the film industry, especially the foreign and independent film industries, could be crippling.

In court, Kunstler hoped to prove that the MPAA’s rating ruling for ‘Tie Me Up!’ was “arbitrary and capricious” under a New York State law, and one of his arguments was that plenty of films had been released as R with scenes that were equally or more scandalous (he cited Blue Velvet and Fatal Attraction as examples).  But on July 20th 1990, the judge ruled to uphold the X rating for Tie Me Up! Tie Me Down!. In his ruling, the judge chastised Miramax Films for using the lawsuit as publicity hype for the film. But the judge also questioned “the integrity of the present rating system,” citing the informal, parent-based structure as a weakness. The day after the ruling, in anger and frustration, a handful of filmmakers combined forces to make their concerns known to the President of the MPAA in what they called An Open Letter to Jack Valenti.  In the letter, the filmmakers called for a replacement for the X rating that had “become to be universally recognized as pertaining simply to pornography.” And soon enough (that very year), after another court case, more bad publicity for the MPAA and another rating dispute (Henry and June), filmmakers would sigh in relief as the X rating was thrown out by the MPAA and replaced with today’s NC-17. Sadly, as we have learned in the past 20 years, the creation of the NC-17 rating would hardly matter. Just a few months ago, Weinstein found himself confronting the MPAA again and threatening to hire “big gun lawyers” again over the initial NC-17 rating for Blue Valentine.

See the full version of the Open Letter to Jack Valenti below:

At a time when all artists’ rights to free speech and expression are in peril, we the undersigned believe that the artistic freedom and integrity of American filmmakers are being compromised by the outdated and unfair rating system whose practices have and will continue to result in the defacto censorship of their work.

The ‘X’ rating, originally conceived to indicate that a film contains mature and/or adult material and should not be viewed by children, has come to be universally recognized as pertaining simply to pornography. As a consequence, an ‘X’ rated or unrated film is denied exhibition in thousands of cinemas nationwide, display advertising is forbidden by a growing number of major metropolitan newspapers, and radio and television advertising in most markets is not available at all for films that are not rated either G, PG, PG-13 or R by your organization. We believe that it is imperative that the MPAA correct this problem by creating a new letter rating that will more fairly reflect the association’s original intentions with regard to adult-themed fare.

While the MPAA maintains that its Classification and Rating Administration does not censor films or force filmmakers to censor their films, the taint of an ‘X’ rating clearly results in massive and arbitrary corporate censorship. Failure to address this problem will help foster a new era of “McCarthyism” in the arts as during the ’50s when the networks claimed it was not they who blacklisted artists, but the sponsors.

We therefore strongly suggest that a new rating of ‘A’ or ‘M’ be incorporated into the system to indicate that a film contains strong adult themes or images and that minors are not to view them. This is not a compromise between art and commerce, it is an essential action designed to protect the United States Constitution. It is an issue as important as film preservation; in fact, it is film preservation.