Home
Entertainment
Black Sails, Ep. 1.07: “VII.” – not much calm before the storm
Prev Article Next Article 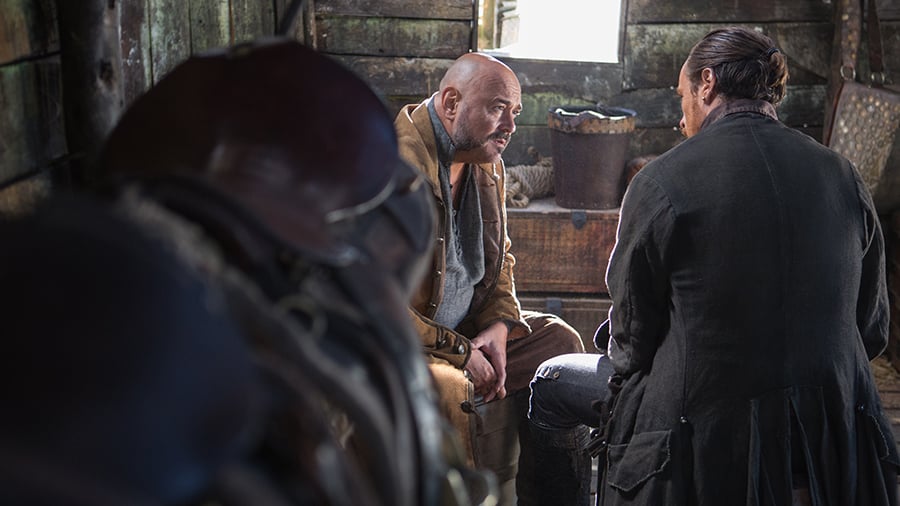 It’s amazing to see the differences between an exposition-heavy episode of Black Sails in its seventh episode and an exposition-heavy episode in its second or third. By now, most of the characters are fleshed out so that even if you might not be invested in them and their conflicts, their intentions are clear. The problem with the information dumps earlier in the season were mainly that the there wasn’t much in the way of action and thus the stakes were ambiguous. Now that we’ve seen plenty of people die along the way, the stakes couldn’t be more evident, making the drama surrounding Flint’s crazed mission both compelling and exciting.

That’s not to say that the exposition here is terribly interesting, as “VII.” functions much like any penultimate episode in a season of television might. But there are a couple of scenes outside of the A-story that beef of the episode enough to keep it one with the past two episodes of Black Sails, which put the series into a higher gear. Vane’s visit to the island of his past, where he was once a slave, is chief among these series of scenes. Specifically, the dialog exchanges and fight sequence between Vane and Albinus are charged and just fun to watch, partially due to how monstrous Albinus is. Clearly, Vane wasn’t meant to have a huge role in the Black Sails story for its first season, making it seem like following him around might have been a waste of time, but “VII.” is a great vehicle for creating expectations for Vane going forward. Arising from what could have easily been his grave, he kills Albinus and wins over the man’s infamous crew, which will not bode well for Flint or anyone else Vane perceives to be standing in his way.

Of the Nassau scenes, Flint and Gates’ conversation is easily the most central. All season long, Gates has been reluctantly defending his captain in the face of obviously bad decisions or a lack of information that Flint was withholding. The events of last week, in which Billy was left  behind, made Gates reach his breaking point. Dufrense, new quartermaster, says as much later in the episode. Some things are excusable, but getting rid of Billy is going too far. Billy was/is (I assume he’ll be back) like a son to Gates, and it’s enough to make Gates apathetic as far as Flint is concerned. He tells Flint he’ll be parting ways with him after this is all said and done, but the apathy is expounded upon when he tells Dufrense there won’t be any dissent coming from him if and when they decide to kill Flint for his transgressions. Flint has alienated the one man who still believed in him. Yet, there is one woman who holds out hope for the captain. Flint’s scene with Eleanor after one too many drinks treats that relationship like a father-daughter one, which is timely given that Eleanor’s other father figure, Mr. Scott, has been ostracized for essentially being a good guy.

Filling in some of the narrative gaps here and there are Jack, Anne and Max. There’s a wonderfully comedic moment in which Anne leaves Jack tied up to the bed and completely naked, after which he has to simply lie there with that deadpan expression that Toby Schmitz  is so good at. But “VII.” also makes a point to show the troubles Jack is having as owner of the brothel, incapable of turning a profit. Max steps in to illustrate why he needs to get his head out of his ass, and even though the issue of running the place well isn’t important to Black Sails on pretty much any level, the actors do a great job of making the material entertaining to watch. And that’s kind of the point here, where “VII.” really just needs to build up to the final conflict of the season. The final images of the two ships setting off to capture the treasure Flint’s been after and a muddied Vane standing over Albinus’ corpse signal a raucous conclusion to what has turned into a respectable first run for Starz’s newest adventure series. We’ll see how and where it leaves us hanging in the season finale next week.