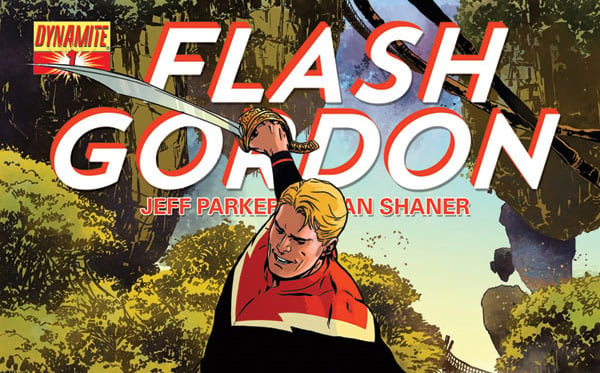 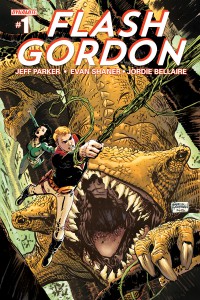 Eighty years after his first appearance in the Alex Raymond comic strip, Jeff Parker, Evan Shaner, and Jordie Bellaire have rebooted the classic sci-fi hero yet again for the 21st century bringing him into the present. All the things even casual fans will recognize are here: the adventurer Flash Gordon, the pompous Dr. Zarkov, speeding spaceships, strange planets, and of course, Ming the Merciless. Jeff Parker has had success with older properties, like Marvel’s Agents of Atlas featuring forgotten heroes from the 1950s Atlas Comics and more recently DC’s digital comic Batman ’66. Parker has a true love for the retro and is also skilled at updating them for contemporary comics readers. In Flash Gordon #1, he revises some of the more problematic elements of the Flash Gordon mythos. Dale Arden isn’t just a scantily clad love interest, but takes an active role in the adventure and is interested in recording their adventures for posterity. And Ming the Merciless is just an alien warlord, not an Asian stereotype. Some scenes in Flash Gordon #1 are clunky (like the introduction of Zarko) and could use context, but the comic succeeds as a science fiction adventure. Evan Shaner captures Flash’s energetic and reckless nature through his art and also creates a wide variety of diverse planets. And colorist Jordie Bellaire sets the tone for everything as she transitions from the washed out tones of Earth to the rusty red of Mongo and the shadows of a cave on a mysterious planet.

Even though the majority of Flash Gordon is an action adventure comic, Parker grounds it in a real-life theme: the decline of NASA’s space program. The comic opens with reporter Dale Arden talking to a NASA representative about the space program succeeding if a scientist can interact with people. The scientist could be Flash Gordon, but he doesn’t show it in the beginning. Parker does a good job introducing Flash, Dale, and Zarkov before they end up in a spaceship together. He makes Flash a thrill seeking hero, who is skilled at daredevil stunts, but gives him flaws, such as recklessness and a lack of purpose in his life. But the story is still fun and action packed despite these additions to Flash’s character. Zarkov is still prickly as ever, but Parker gives him a sarcastic sense of humor and an alcohol problem to continue with the theme of heroes with flaw. Dale is exposition girl for a lot of the comic, but she is a big part of the beginning and end of the comic while being the most inquisitive about other planets.  These characters aren’t heroes yet and will have to earn that title as they hop from planet to planet trying to get back to Earth. 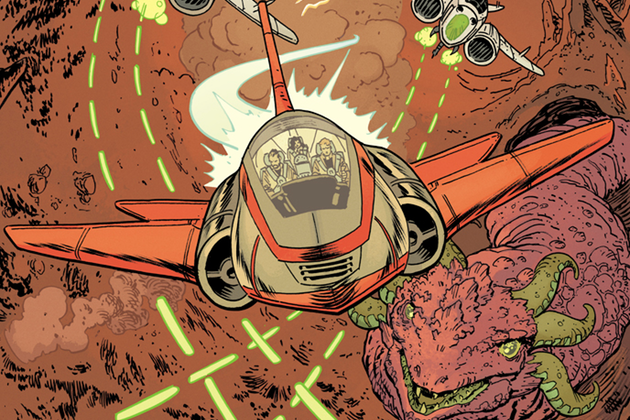 For the most part, Evan Shaner’s art is dynamic and larger than life. His best work is when Flash goes into action whether he is jumping off a bridge into Category Five rapids or swinging on the vines of an alien planet. Shaner also is skilled at placing ships in flight in a panel using speed lines and different angles to show dogfights or aerial maneuvers. However, some of his early pages on Earth seemed rushed or out of order. However, Parker’s dialogue helps alleviate this in the character introduction scenes and adds humor and characterization to the planetary exploration scenes. But Jordie Bellaire is the true hero of this book. Shaner’s pencils might depict the strange worlds that Flash and his crew visit, but she gives these places real character. From the garish colors of Ming the Merciless’ palace to the snow covered world that Flash spends one panel in, Bellaire contributes to world-building as much as Parker and Shaner. Her best work is showing the trippy, kaleidoscope when Flash’s ship goes through portals to different worlds.

Flash Gordon #1 is a great reboot of the classic character for modern readers. It is filled with humor, adventure, and characters that have potential for growth and development. The early part of the comic might seem disjointed, but Parker and company stick the landing and deliver a thrilling adventure with kinetic art from Evan Shaner and diverse color work from Jordie Bellaire. They make Flash, Dale, and Zarkov characters with strengths and weaknesses while also creating a vast universe for them to explore. In some of its character designs and in-jokes, Flash Gordon #1 is an homage to the old Flash Gordon stories, but mostly it is a fresh start for Flash and his band of adventurers.