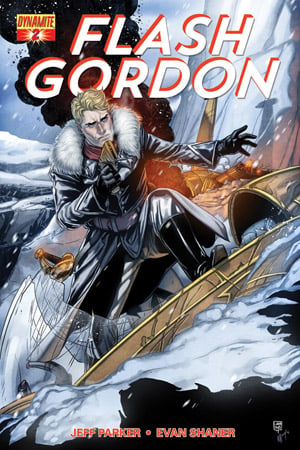 Jeff Parker continues to effortlessly show off what makes Flash Gordon and his rag-tag group of adventurers special. This comic more than exceeds expectations, and it is just getting started. The first issue doesn’t waste too much time introducing each of the human protagonists; instead Parker instead chooses to flash-forward (pun!) a year into the trio’s exploration on Mongo.

The second issue is surprising in that, unlike the prior one, it shows nothing of the group’s personal life before they were on Mongo. Parker chooses instead to show the character’s personality through the story and their actions and reactions. In this particular adventure Flash and the gang make a daring escape from the villainous Ming’s guards though the Valley of Portals, while their ship has landed in a giant rainforest planet called Arboria. 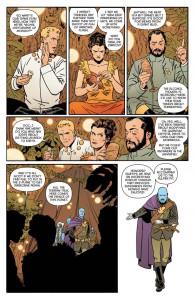 Dale Arden, the resident clever person and all around clear thinker of the troupe, tricks the Arboria residents into thinking at she and her group are royal historians sent by Ming. This issue does a great job of showing how the three protagonists differ from each other. There’s a lot of heavy character work done here, without it being too obvious or heavy handed. Dale is always finding clever ways to avoid danger and her quick wit gets her male companions out of a few tough spots when they inevitably say or do the wrong thing. Meanwhile, Flash, a complete thrill seeker is always ready for the next adventure. In this issue, after a banquet held for the faux-historians, Flash is shown how to play a game popular amongst the people of Arboria in which you must ride a giant slimy bug, without getting bumped off, to the center of the arena where a queen bug is located and remove the arrow from her back before the other players. Without thinking twice Flash jumps in and, wouldn’t you know it, succeeds in record time (Insert Queen song here). The nihilistic Doc Zarkov shows up to tell them tomorrow morning they’re joining a caravan to the Forge, where Ming creates his evil monsters from experimenting on innocent captives. But our heroic group won’t let this happen and Flash reveals himself to the scheming prince by throwing himself into danger and trying to stop the dastardly machinations of Ming!

The best way to describe this series is, simply, fun. Not to say that it doesn’t take itself and its world seriously but 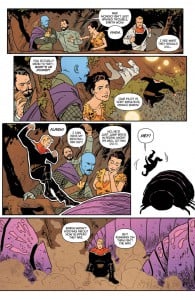 the theme of adventure is clear throughout the entire issue. Jeff Parker has a way making every page flow with an atmosphere of poignancy and has a way of knowing just what makes a character tick and how they’ll express themselves to each surprise in store. No conversation ever feels like its exposition filled or forced, and within the few pages, readers get a good sense of every character.

Doc Shaner shines in every page. Every character comes to life much like stills from the best animated movies. There is a two-page spread of a wooden ship that has trees growing out of it which is moved through the air by giant space birds that looks way more awesome than could possibly be described. There is also a lot of design work, such as Flash’s ceremonial garb, and his action suit which both look aesthetically pleasing and dynamic.

This comic is just starting its run, but it’s a roller coaster ride you don’t want to miss out on. It’s a strong contender for one of the best books of the year and in just two issues, Dynamite has picked a superb creative team who really cares about the franchise and wants to both honor what came before, and propel it to new heights. If you like having a good time while reading comics, this is a must read. 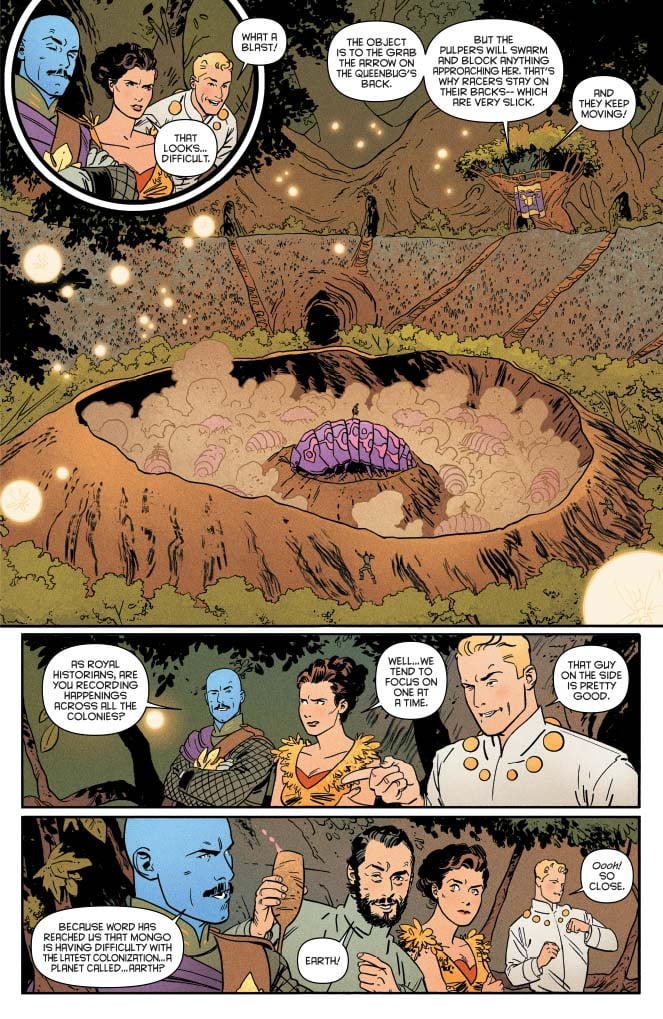