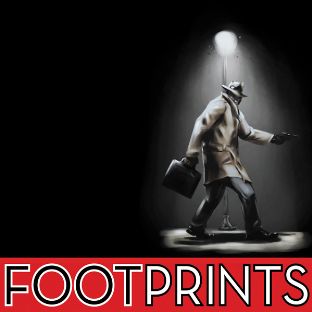 Mr. Foot is a sasquatch who lives among humans as a private investigator. His friends The Jersey Devil, The Lock Ness Monster, Le Chupacabra, and Megalodon all form a team of investigators meant to track down other oddities like themselves until a falling out between Mr. Foot and his brother Yeti caused the group to go their separate ways. But then one day in present time, Mr. Foot receives a cryptic letter from his brother, followed by Yeti’s decapitated corpse in the Arctic Wasteland. it’s up to Mr. Foot to bring the team together to solve a mystery that spans several decades and unlocking secrets that could potentially destroy humanity.

Having read Footprints: Bad Luck Charm before reading the subject of this article, (the review of which can be found here), I was intrigued by the mystery behind the breakup of the detective agency run by Bigfoot and Yeti. It was a twist on the “Supernatural authoritative agency” trope that we’ve come to see with increasing regularity in both comics, TV, and Movies. Having now read the backstory I can safely say that while it was all that I expected, it was still well delivered and handled nicely in the conventions of the noir genre that this series so steadfastly adheres to.

The straightforward nature of the plot’s central mystery felt not so much that we were solving the case with Foot as much as along for the ride while the crew did their thing. That isn’t to say this is a bad thing because in terms of actual suspense, there weren’t any other suspects to consider and the red herring didn’t quite throw me off the notion of who the real villain was. In that way, reading Bad Luck Charm first did sort of spoil it for me, but that was an error on my part and I freely admit that. That having been said, it isn’t much of a leap to figure out who Yeti’s killer is. 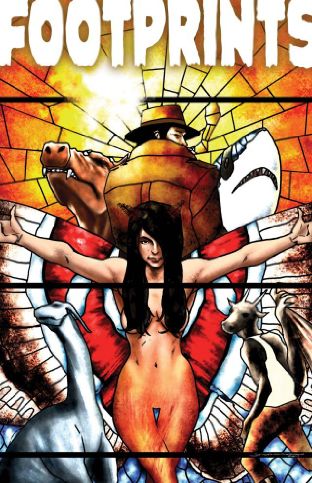 Despite the mystery being not all that mysterious, it is still a compelling narrative and it’s engrossing to see these characters interact. Foot’s relationship with Yeti in flashbacks, Megalodon’s romance with The Loch Ness Monster and the heartache he has when he finds out she slept with a man for information. No, really. The Loch Ness Monster has sex with a human male to get information. It’s the internet age, I am rarely surprised by anything anymore. As brief as it is, even the interactions between Foot and Motheresa are endearing, though typical noir fare. You get a real feel of these characters and their individual contributions to the team as well as their personal motivations and resentments.

The pencils by Jonathan Moore lend themselves very well to noir storytelling. The panels are dark, heavily shadowed, but knowledgeable in what to show and what to keep hidden. While it isn’t necessarily gory, we do see the killer has a penchant for decapitation and we see the results quite clearly. The action scenes, while admittedly cramped in some spots, are fluid enough one can discern what’s going on. A good, solid job done all around by the artist.

While I did find the story overall compelling, I admit the climax was very understated. Without spoiling too much, it involves basically a plot to overthrow humanity using an army of monsters as foot soldiers (of a sort) by allowing runoff from a secret EPA experimental base to speed up the effect of global warming. The villain comes off a little Magneto-esque with their idea of monsters trying to fit in with humans and disdain for humans in general. I understood the endgame but the actual mechanics of it still eluded me. Were they waiting for humanity to bomb itself into nigh extinction? If so, it’s about the most passive-aggressive world domination scheme I’d ever heard of.

One more thing I’d like to add, now that the Superman allegory comes into mind, but I got the sense that Megalodon/Don was treated somewhat like the Superfriends’ Aquaman of the group. He was pretty much only effective in water, the others (aside from Nessy) regarded him with little to no respect. Don held deep, bitter resentment for it, as well as Nessy’s indiscretions. It helped explains his later actions and his ultimate fate at the end. It was good to see that he was able to achieve a full arc despite limited panel time.

Bad Luck Charm was as good a jumping on point for the series as Volume 1. Both do a great job at setting up the universe where Bigfoot, The Yeti and other folk legends come out of hiding in order to live among civilized society. The notion of them being private investigators or “dicks” helps facilitate them getting involved into various kinds of cases and shenanigans. It’s as easy to digest as a super-powered alien being a news reporter to stay close to emergency feeds to know where to go to save the day. I’m curious as to what future folk legends we might find? Paul Bunyan (though how a man as large as he is hides from the world is anyone’s guess) Johnny Appleseed? Rip Van Winkle? The possibilities for mythological creatures that could potentially arrive in future volumes are exceptionally vast. It’s a bit of a change from the usual Vampires/Werewolves/Zombies usual suspects that have become regurgitated and marketed to the point of oversaturation.

I’m a fan of genre mixing, bending, and in general playing around with the idea of genre conventions or at the very least, introducing elements from other genre styles to create something special. This series takes an interesting premise and sticks to the conventions of noir with a vise grip. This both works for and against the story but that’s more of the standard noir tropes (Hard-boiled protagonist, femme fatales, tough-as-nails dames) but there’s just enough originality to separate it from your standard gumshoe tale.

Overall, I would say definitely check out Footprints Volume 1: Iced. While the ending is a bit head-scratching, it’s still a good story with a solid structure that takes you briskly from point A to B, filling in gaps along the way, but leaving just enough out for you to figure out on your own.