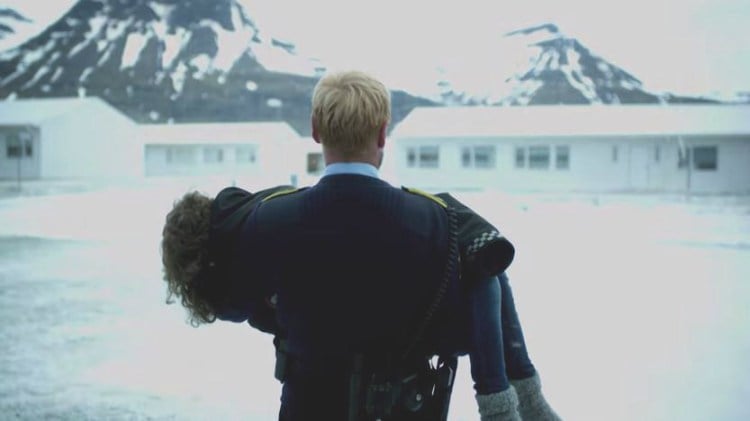 Fortitude flaunts its lofty ambitions before the title even adorns the screen: we’re immediately thrown into a forlorn icy tundra, with splashes of black staining the ubiquitous white landscape. The sun, a burning, bulbous orb, hangs in a haze in the sky. A man, clad in arctic gear, carrying a rifle and a camera outfitted with a telescopic lens, traverses the scene. Before any words are spoken, a shrill scream carves through the wind and the man, obviously no novice, pulls off his mask and draws his rifle. Played by Michael Gambon, he does not look well. Through the scope he sees a polar bear mauling a man. The man’s face is mottled in blood, his leg several feet from the rest of him. Gambon aims, and he puts one through the victim’s head. The first splash of color we see is red. Not more than five seconds later a car door slams—where did the car come from?— and a Sheriff with a beard the color of smoldering embers casually approaches. “Get out of here,” he tells Gambon. “Just go home.”

If one had synesthesia and likened television programs to colors or shapes, Fortitude might appear as a gray fog, or perhaps something resembling a gleaming shard of ice. The show plays with patterns, with colors, but it’s far from knavish. We see children wearing red hats against a pallid backdrop and inadvertently the color recalls blood seeping from the man’s mauled face. Houses replete with windows allow voyeurs to gaze inside, but every house, every person, holds deep, dark secrets. Simon Donald, progenitor of Low Winter Sun (the pretty-great, two-part British mini-series, not the AMC show), brings the same sense of humor to Fortitude that he brought to Beautiful Creatures, The Deep, and Low Winter Sun (UK), which is to say: none. Utterly devoid of fun, Fortitude doesn’t pretend to peddle in light-hearted escapism. This is a heavy show of unflinching vision, with tar-black blood pumping through a cold heart.

Director Sam Miller doesn’t simply point his camera at some pretty scenery. His visual motifs—endless panes of gleaming glass, lonely machinery enveloped by white, colors rupturing and spilling in the frame like open sores—reward keen eyes. The magnanimous presence of snow will likely draw false comparisons to Fargo, FX’s stellar translation of the Coen Brothers’ classic film. But Fortitude is a brazen, baleful-hearted jaunt into an ineffable nowhere, with The Killing’s penchant for brooding and the placid, all-pervading melancholy of the devastating Broadchurch. A mystery that probes the mental as well as the environmental, the show draws its name from an intimate community in the archipelago of Svalbard. Fortitude harbors people from various countries. We hear a medley of languages, but there’s no cultural clash here, because everyone seems to meld. It’s the kind of place where they don’t have any crime, and yet bodies keep piling up like firewood. Bears outnumber people, and these aren’t your friendly Paddington Bear-type bears; polar bears, we’re told, will maul you and start to eat you alive. Those brave enough— or perhaps stupid enough— to wander the sinuous, snowy outskirts are required to carry a rifle for protection. A handgun will only piss the bear off. 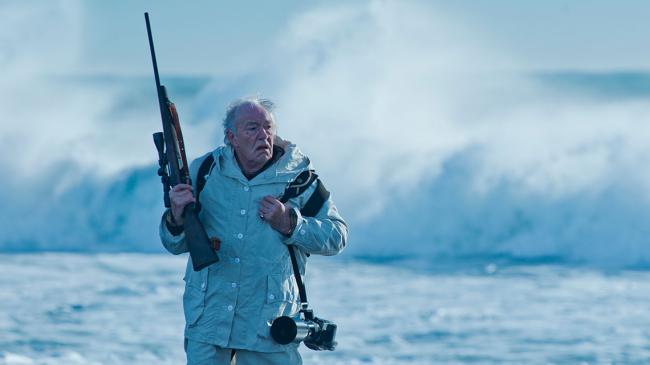 The cast is a venerable nerdgasm of television icons and character actors. The motley coterie of characters includes the aforementioned Gambon—known most recently for his role as Dumbledore in the Harry Potter films, and also as one of England’s finest living actors—as Henry Tyson, a photojournalist dying of liver failure; Sofie Gråbøl as the governor, who’s keen on having a luxury hotel hewn into the side of the vast glacier; Nicholas Pinnock and Jessica Raine as Frank and Jules Sutter, respectively, parents whose son has purportedly contracted polio; Richard Dormer as Sheriff Dan Anderssen; and Christopher Eccleston as Professor Stoddart, who has been asked by the governor to investigate the glacier and deem it safe so they can begin constructing their hotel.

Eccleston is second-to-none at displaying internalized pain. As with his gravely underappreciated Ninth Doctor, here Eccleston feels like a man who knows too much and holds too many secrets. Appearing weary and weathered, his scientist seems like one of the few people in Fortitude you can trust, which of course means he may not be around for long.

Also of note is Dormer, who quickly establishes himself as a remarkable on-screen presence. As the duplicitous Norwegian sheriff, he can slip a sense of uneasy deceit into the most banal of intonations. He emits an air of knowingness, and in a show that deals almost exclusively in ambiguities, that makes him dangerous. We’re told that, due to the sheer lack of crime, the citizens don’t know whether Anderssen is a “good sheriff or a bad sheriff,” but either way, Dormer gives a great turn.

The purported main character, Stanley Tucci’s DCI Morton, doesn’t make his entrance until an hour and eight minutes into the two-hour pilot. And that’s fine, since Donald’s creation takes its time setting a mood, placing clues, then usurping those clues. He needs to provide a corpse before he can call in a detective. Trying to describe the plot of Fortitude is akin to trying to describe the color blue to a blind person. Ethereal and enigmatic, the show rebukes immediate gratitude and makes us work for our rewards. When most prestige shows try to project an air of faux-erudition by spitting out sophomoric philosophy or guising thematic ineptitude with lavish camerawork, Fortitude’s patient atmosphere and deliberate pacing are most welcome.

Like the vodka the characters throw back, Fortitude might be off-putting at first, maybe makes you feel a bit uneasy; but after a while, after some gestating, it becomes intoxicating, venomous, and knocks you on your ass. 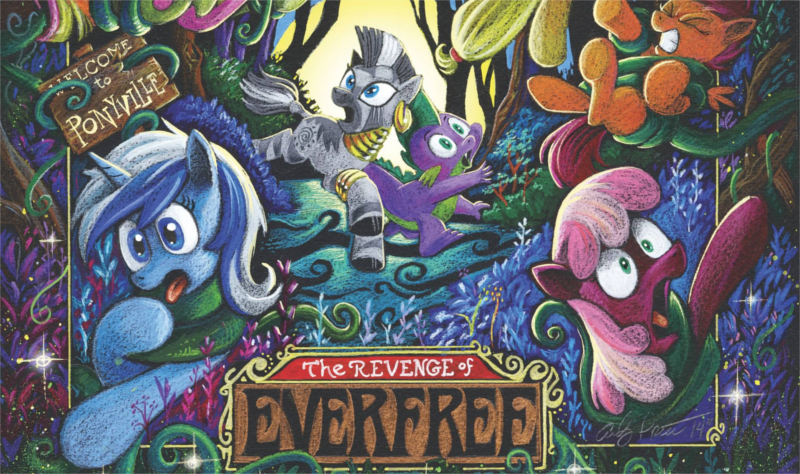 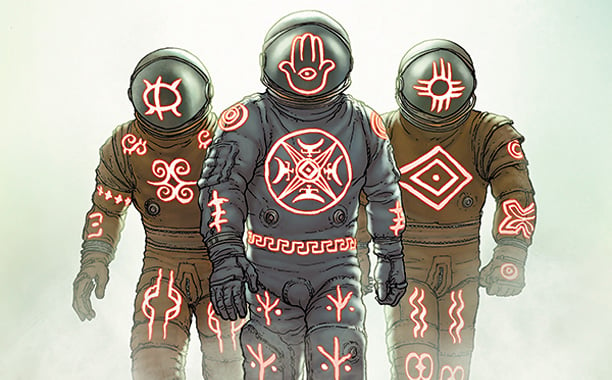