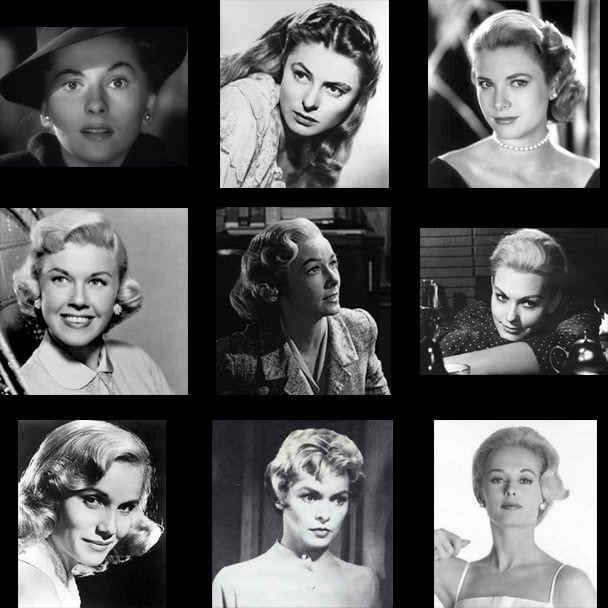 The Trouble With Alfred

Once you know those words came from the mouth of Alfred Hitchcock, how would you expect the quote to end? Perhaps with something like ‘…I loathe them.’?

Over time, the legend of Hitchcock as kinky, voyeuristic misogynist has gradually accumulated details, like a snowball rolling downhill, until it has become the kind of unstoppable self-perpetuating leviathan that engulfs the truth the way the avalanche destroys an Austrian hamlet.

Google the man and you’re confronted with a list of accusations: his marriage was a sham. He used to expose himself to actresses to get them to react. He tried to blackmail Tippi Hedren into having an affair with him, unleashed the seagulls on her when she refused. He only liked blondes. He used to demonstrate how to strangle a woman with one hand at dinner parties.

But where did it start, this idea that Hitchcock was a woman-hater? How could a man, widely respected during his lifetime, probably one of the world’s most successful film directors, have ended up with this kind of a reputation?

It all started with the films. The films are, after all, his legacy. Over a career which spanned six decades and produced over sixty films, Hitchcock directed hundred or possibly thousands of performances. But the trouble with Alfred, the roots of his reputation as a woman hater, can be traced back to just a handful. 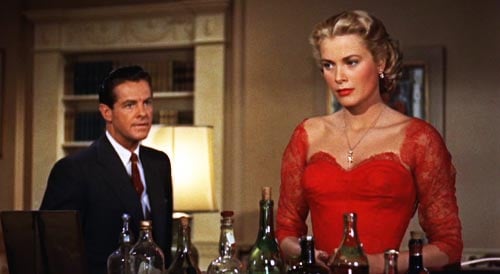 Based on a successful stage play, this material was natural territory for Hitchcock, who by this point in his career had a solid track record in psychological suspense. But there are two things about Dial M for Murder which single it out as a starting point for the whispers. Firstly, the husband in the story is a spectacularly rotten piece of crap – vengeful, sneaky, slippery and satanically persuasive. Not only does he attempt to have his wife killed, he coolly pins the blame on her when his henchman fouls up. But what really makes the film work (in the sense that you have to watch it from between your fingers) is Hitchcock’s masterly casting of Grace Kelly in the role of the wronged wife. Kelly, as pretty and blonde as the fairy on the top of a sinister Christmas Tree of wickedness, plays the increasingly beleaguered Margot with the innocence of a tiny kitten being slowly strangled. At a time when blondeness was most usually associated with the word ‘bombshell’ (Gentlemen Prefer Blondes came out only a year before Dial M), Hitchcock coolly subverted the public expectation of blonde=trashy and used Kelly’s fairness to win the audience’s sympathy. Never slow on the uptake, Hitchcock noted the success of his ploy and would return to the theme again. 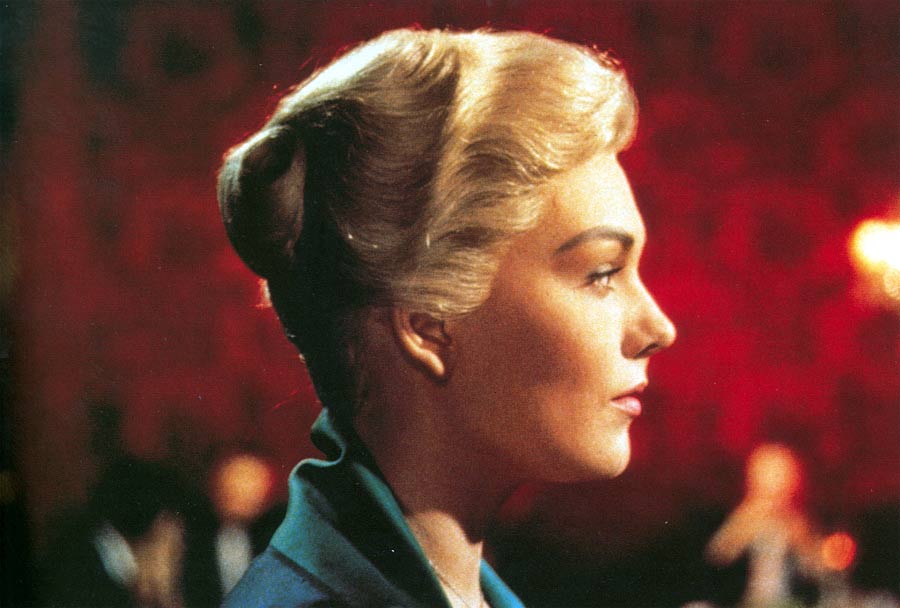 Kelly starred in two more Hitchcock films during the 1950s, but by the time the director decided to adapt the French novel The Living and the Dead for the screen the actress had quit movies in favor of married life as a princess. In any event, Kelly wouldn’t have been right for the part. Injured innocence was not the quality Hitchcock needed for the female lead in Vertigo, although blondeness is a key element of the plot. Instead he used Kim Novak, at that point up and coming rather than established (picking actresses just as their star began to rise was one of Hitchcock’s skills) who, with her sleepy lynx eyes and biteable bottom lip brought a more earthy presence to the part. Novak’s performance gained mixed reviews and the film was not, by Hitchcock’s standards at least, a commercial success. Audiences disliked the unhappy ending and the emphasis on internal conflict rather than action.

But one thing critics are agreed on is the subtext of the film. James Stewart, damaged, guilt ridden, becomes obsessed with the likeness between his new love and a woman he watched die. He repeatedly forces Novak to dress up (literally become blonde) in order to satisfy this obsession. It’s all about men dominating women, as Stewart bullies his girlfriend into becoming someone else, with Hitchcock throwing in Freudian symbolism (towers, falling) to hint at impotence as the underlying cause of Stewart’s behavior. And in a case of artistic reverse-engineering, some started to suggest that Vertigo wasn’t just a story of obsession and impotence, it actually represented Hitchcock’s own repressed fears and desires. 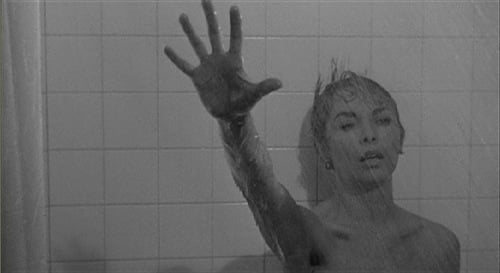 With these two acts of subversion: using blondeness as a way to play with society’s ideas of good versus bad women and working the symbols of psychoanalysis to hint at sexual dysfunction (at a time when therapy was the latest must-have for the suburban wealthy) the wheels were set in motion. In a case of art becoming life, Hitchcock’s films became Hitchcock: a direct line to his inner soul, a process which was only accelerated when in 1960, he directed the most notorious film in his oeuvre: Psycho.

By then, interestingly, Hitchcock had abandoned the Freudian in favor of a much more direct approach. Although filmed in black and white, Psycho is a very modern film. The camera work is offhand, almost abrupt. Janet Leigh, officially the star of the film, is killed before the movie is even halfway through. It contains nudity, overt voyeurism and an unmarried couple in bed together (the horror!) and although that might sound tame now, at the time this was all ground breaking stuff. But Hitchcock’s almost casual disposal of Leigh, (who again wasn’t Grace Kelly, but who did have some of the same fragile charm) in the infamous shower scene, grated on the collective psyche. Even though slasher movies, while not a staple, were no rarity, Psycho was a slasher which made the audience unsure who they identified with, who was at fault for all the bloodletting (it’s hard to pin the blame on a mummy in a wheelchair). So it seemed natural to blame Hitchcock for it all. His perverted fantasies were what we saw played out on the screen. If we felt dirty when we left the cinema that was because we sensed the director’s unhealthy enjoyment of seeing his female characters murdered. Or so the argument went. 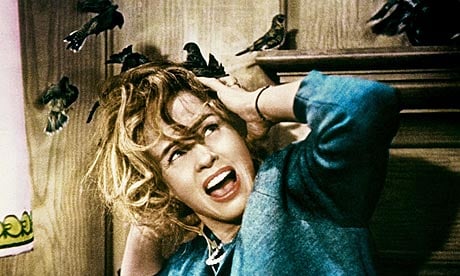 Tippi Hedren in The Birds

And the idea that Hitchcock’s films were not only populated with his own fantasies, but that one of said fantasies was torturing hapless females, became even more strongly rooted when he adapted Daphne du Maurier’s novel in 1963. He cast the then-unknown Tippi Hedren as the female lead (remarking on her resemblance to Grace Kelly in interviews at the time) and signed her to an exclusive contract. Hedren did not enjoy the shoot, claiming later that she was told that the iconic scene where she is attacked by seagulls would be filmed using mechanical birds. In fact she spent five days having ravens, gulls and other avian species thrown at her head. We’ll get to Hedren and Hitchcock in a moment, but in terms of this film, once again Hitchcock excelled at combining the psychological with the actual – using Hedren’s pursuit of a non-committal Rod Taylor and his cloying relationship with his mother to make the bird attacks seem like the physical manifestation of repressed female sexuality. Another blonde in peril. Notes were taken. The legend grew. 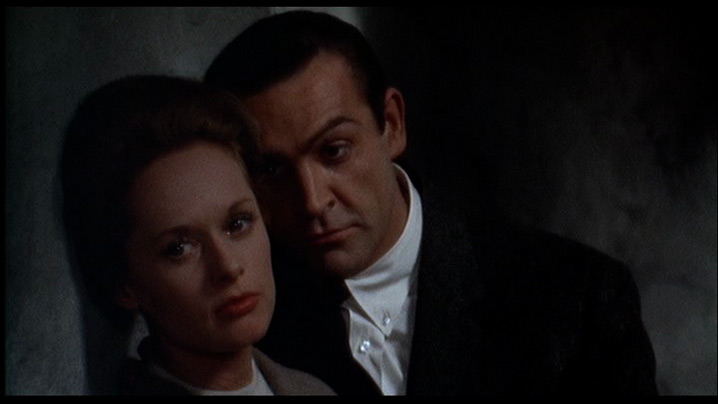 But the final argument for the prosecution in the case of Alfred Hitchcock vs Public Opinion has to be this film. Hedren starred for the second (and last) time. The story concerns a disturbed young woman, the Marnie of the title, who when caught stealing is blackmailed into marriage by her victim. The fact that the blackmailer is Sean Connery helps us not to feel too sorry for Hedren in her predicament as unwilling bride. Again, Hitchcock knew how to play with our expectations. He has Connery force Hedren into sex (as it would have been termed in those days – now we would call it rape), but because it’s Connery, we don’t recoil from the act. The conflict between our reactions – how could he! vs lucky cow!- unsettles us deeply. Again, the moral compass spins.

And it spins all the more violently when we hear what happened next between Hedren and Hitchcock. Silent for years on the subject, in an interview with the BBC in 2010 Hedren claims that she refused to work with Hitchcock after Marnie because he had become obsessed with her. She describes how the director had her followed and had her handwriting analyzed. When she tried to get out of her contract with him she says Hitchcock’s response was to say that he would ‘ruin her’. When asked if this was because he wanted a relationship with her, Hedren says ‘I would imagine that was what it was all about.’

Which isn’t exactly the same as saying you’ve been groped and Hedren, though given ample opportunity, has never claimed he laid a finger on her, only that he wanted to, or so she believes. Other actresses – in this interview: Susan Pleshette, Janet Leigh, Eve Marie Saint and Karen Black – paint a picture of a man who was meticulous, thoughtful, funny and highly talented. Hedren, interestingly, was also present during the interview. Her contributions are few and far between, although she does scotch one tale about Hitchcock giving her daughter Melanie Griffiths a doll in a coffin, which presents her as fair-minded, if not exactly bursting with indignation over her treatment.

But it’s a long way from a dispute over a contract and a possible infatuation to a creepy misogynist who secretly wanted to murder his female co workers. When we say these things about Alfred, are we picking on the Wrong Man?

We’ll probably never know. But when you hear the ending of the quote which begins this article, it does seem a little clearer.

What Hitchcock actually said was, ‘I don’t exactly hate women. But I certainly don’t think they are as good actors as men.’

Good old fashioned sexism? As Alfred would have put it, certainly. But Psycho? 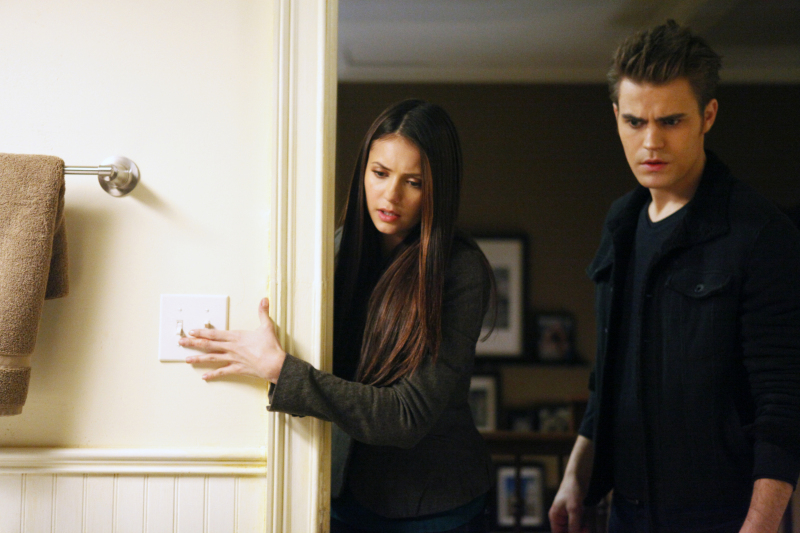