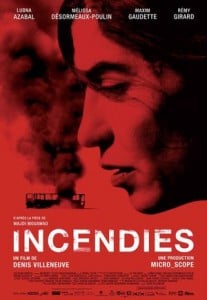 “Villeneuve’s screen adaptation has been hailed as his best feature film to date.”

Canada’s submission to the Best Foreign Language Film category for this year’s Academy Awards comes in the shape of a rather atypical piece of Quebecois cinema – a mostly Arabic language war drama. Originating as a coup de foudre that director Denis Villeneuve had for Wadji Mouawad’s play of the same name, Villeneuve’s screen adaptation has been hailed as his best feature film to date.

The blaze of the title is largely carried by Lubna Azabal’s character, Nawal, a modern-thinking woman of Christian descent in a fictional Arabic-speaking country in the 1970s. From the very first flashback scene in which Nawal appears, the honour killing of her refugee boyfriend and father of her unborn, illegitimate child perpetrated by members of her own family, tragedy and upheaval shadow her life. for vendetta for her murdered beloved and disappeared son rather than ideological inclinations per se, takes her down an increasingly violent vortex. The personal becomes political as Nawal, in a somewhat improbable narrative thread, joins the opposing side’s militia and becomes a political assassin in the hope of retrieving her son snatched by the Muslim paramilitaries in a vicious raid on a Christian orphanage. Retaliation breeds retribution and so the country descends into decades of fratricide. As Azabal’s psychologically elusive, quietly bullish character spirals into reluctant martyrdom, the fragmentary narrative starts to weave together yet another superimposed layer of familial tragedy.

Following Nawal’s death in the film’s opening sequence, her Quebec-raised listless twins grudgingly start out on a reluctant journey to deliver their mother’s posthumous letters to their hitherto unknown father and a brother whose existence is about to jar the void comfort of their lives in the dystopian bleakness of wintry Montreal. Tracing back their outcast mother’s traumatic history, Jeanne, the more intense of the two siblings, starts to uncover the vicious scarring left behind by decades of conflict. Her mother’s memory is very much alive in her home village and it comes with a burdensome heritage –  ‘You are not welcome here’, Jeanne is told by a bevy of local women in a country where honour, clan, and name carry a virtually life-and-death significance. The film does a magnificent job of rendering Wadji Mouawad’s play’s festering longing for the old country. Filmed among the breathtaking vistas of Jordan, it is an aesthetically accomplished piece whose lush yet wistful cinematography serves to mitigate some of the narrative’s horror just as Nawal faces up to her prison torturers by singing. The lingering long shots glide unabashedly, not to mention sensuously, over the pulchritude of the Middle Eastern landscape, explicitly contrasted with the brief sequences set in a grey, slushy, dystopian Montreal. Visually, this dichotomy is conveyed by dramatic shifts in natural light – the juxtaposition of bleached, sun-drenched white stone buildings in the Middle East and the forlorn urban desolation of the Quebec set segments mirrors the shifting intensity of the twins’ collapsing certainties. With becoming sentient, comes suffering, the film seems to imply.

Villeneuve is not afraid of handling politically and emotionally complex themes (hereditary guilt, absolution, the strength required to come to terms with forgiveness) in a low-key, unembellished treatment which manages to steer clear of the potential melodramatic pitfalls abounding in such dense subject matter. The culminating scene comes as a stifled hysterical cry of horror as Jeanne realises the incongruous reason for her existence, and while the ending does raise a fair dose of scepticism, Mélissa Désormeaux-Poulin as Jeanne and Maxim Gaudette as Simon to some extent stave off disbelief by the strength of their muffled shock and leap into mature forgiveness.

Insofar as Incendies is part of the Quebecois cinema landscape, it is a trailblazer. Eschewing the navel-gazing, parochial tendencies characterizing a good deal of local production, this France-Canada co-production stands out as a singular piece not only by virtue of Lubna Azabal’s incandescent performance, but by the scale of its ambition, faultless execution, and the haunting, seared destinies of its characters.