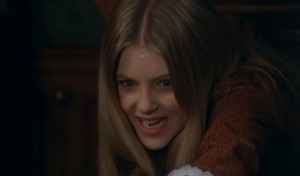 It is horror season again, my favorite time of year, which means my dear friend Justine and I reprise our rivalry and do our best to out-watch each other, for no other prize other than bragging rights for the year. Really, it is an excuse for two horror fanatics to cram their brains with as much horror as possible for a month.

Officially the contest started on Friday the 25th of September, because we get eager and can’t wait for the start of October, and since then I have watched ten films. I started my viewing with one of the best films (not just horror) I have seen in months, Girly. It is a wonderfully twisted film of sexual intrigue, and head games. A full review can be found in Hidden Gems. Next was The Broken, starring Lena Headey. This film had a lot going for it in terms of mood and atmosphere, but unfortunately it gets rather stagnant, and never goes anywhere. One of my favorites, Barbara Steele makes an appearance in The Silent Scream, which is a surprisingly entertaining early Slasher film from 1980.

Up until that point I was three for three as far as seeing good to great films. Then I saw He Knows You’re Alone. The only good thing I can say about that film is Tom Hanks makes his debut. This was followed by perhaps the most offensively bad film I have ever seen, The Gore Gore Girls. More or less it is a film that makes all women out to be dumb, narcissistic, jealous, animals, only used for sex. Luckily 1978’s The Toolbox Murders got me out of the horror funk. It is not a good film, but the first 30 minutes have some of the most perfect murder scenes ever filmed in a Slasher.

I hadn’t seen Candyman in several years, and I liked it much more than I remembered. I found it to be far more optimistic, meaningful, and even inspirational than I remembered, and oh what a great score. Speaking of scores, I saw my first Argento film of the season when I saw The Bird with The Crystal Plumage. It’s not quite as visually striking as other Argento films, but it is a great, morbid mystery.

Sandwiched between two Argento films was the drek by the name of The Prowler. This film is so bad I have vowed to keep away from Slasher films for the rest of the year. The other Argento film was The Stendhal Syndrome, starring Asia Argento. This film was palpably disturbing in its portrayal of a woman terrorized by a rapist.

As I write this, I am currently in the lead. Let’s hope I can keep it up.

The first week of the horror before October rolls around often seems to set the tone and pace for the rest of the season. As someone who anticipates the starts of October for it’s beautiful weather, wonderful smell and the overall feel of the Halloween season, a lot of importance lies in the first few horror selections of the year.

I couldn’t have started off better with two tonally ambivalent horrors, which mesh humour and horror deftly. A rewatch of American Psycho exposed Patrick Bateman’s weakness and self-loathing, while also demonstrating once and for all that horror and comedy are not so far removed as genre studies suggest. Ravenous is similarly fueled by a quasi-comic energy, and is a rare horror-western. The central story of a lost stagecoach train which apparently lead to cannibalization among its riders forces its characters to question man’s ubiquitous position atop of the food chain. Guy Pearce, as Cpt. John Boyd is forced to come to grips with moral considerations invoked when man becomes God.

These two spectacular films were followed up by two disappointments. The Omen fails to live up to its status as an iconic horror classic and outside of the first half hour, the film is little more than a pithy chase film, great score notwithstanding.  Though it doesn’t have any strong reputation as a great film, April Fool’s Day similarly fails to titillate. Though based on an Agatha Christie story this film lacks in suspense and thrills, and the twist is just so absolutely silly: Definitely one to skip.

Next up, Corman sores in two adaptations of Poe stories. The first is Premature Burial, a film starring Ray Milland about a man terrified about being buried alive. It destroys him inside and out, eventually driving everyone away from him, even his young and forgiving wife. Poe’s enduring popularity is rooted in the fact that he deals in the most primal fears. In this case, it works beyond the great primal fear of being buried alive… it’s the fear of lack of peace, of self-destruction and enduring loneliness. The fears explored reach levels of obsession, compulsion. They begin as anxieties but are exasperated by the character’s inability to cope, and soon become absolutely crippling.

Not without its flaws, the lead actress is quite weak and the film never reaches the greatness of some of Corman’s best efforts. The Masque of the Red Death is even better. Beautifully stylized, the film is worthwhile if only for its extravagant sets and literally colourful depiction of depravity. It certainly doesn’t hurt that Vincent Price takes the lead, giving one of his most deliciously sinister performances.

On James’ insistence, I watched an obscure little film called Girly. Tonally off-kilter, it’s the strange story of a very strange family that adopt “friends” only to punish them for not obeying their convoluted set of rules. Michael Bryant (The New Friend) and Vanessa Howard (Girly), really sell the film. They are the only characters with an inch of emotiveness. Both are wondrous; bouncing between alien strength and child-like vulnerability. Neither revealing nor intimate in the ways you’d expect, both play off each other with lustful madness… by and far, the best scenes take place between them. The film is perhaps not as ambitious or as stylized as I would like, but it is still undeniably unique and exciting.

While Opera suffers from poor plotting (what Argento film doesn’t?), the atmosphere more than makes up for any narrative flaws. The film plays out like an elaborate nightmare, and something as simple as a POV shot becomes infinitely more complex as the same perspective is changed through different angles and shot on higher/lower planes with little to no explanation. Perhaps Argento’s most stylistically complex film, many shots and sequences seem downright “impossible”.

On the other hand, Alfred Hitchcock’s The Birds more than makes up for a few silly effects with its infinitely complex and disturbing storyline. By now much has been said for this horror classic, at its heart, it is so excellently disturbing because not once does humanity have the upper hand. The only reason why any character survives is pure luck, as they are pulled out of the situation or the birds simply “stop”. Matched with a pseudo-feminist struggle, there is a sense that women only equal as much as men allow them to be: just as humanity survives only because nature allows us to.

Last film of the week goes even further back to the Black Lagoon. This is my first time seeing The Creature from the Black Lagoon and though it lacks some of the nuance of similar horror/sci-fi narratives of the era, it is worth seeing for its many beautiful underwater sequences.

First week is over, and we’re tied. James has since taken the lead, and I’ll have to play the catch-up game for a while. I am still confident that this contest is in the bag for me.